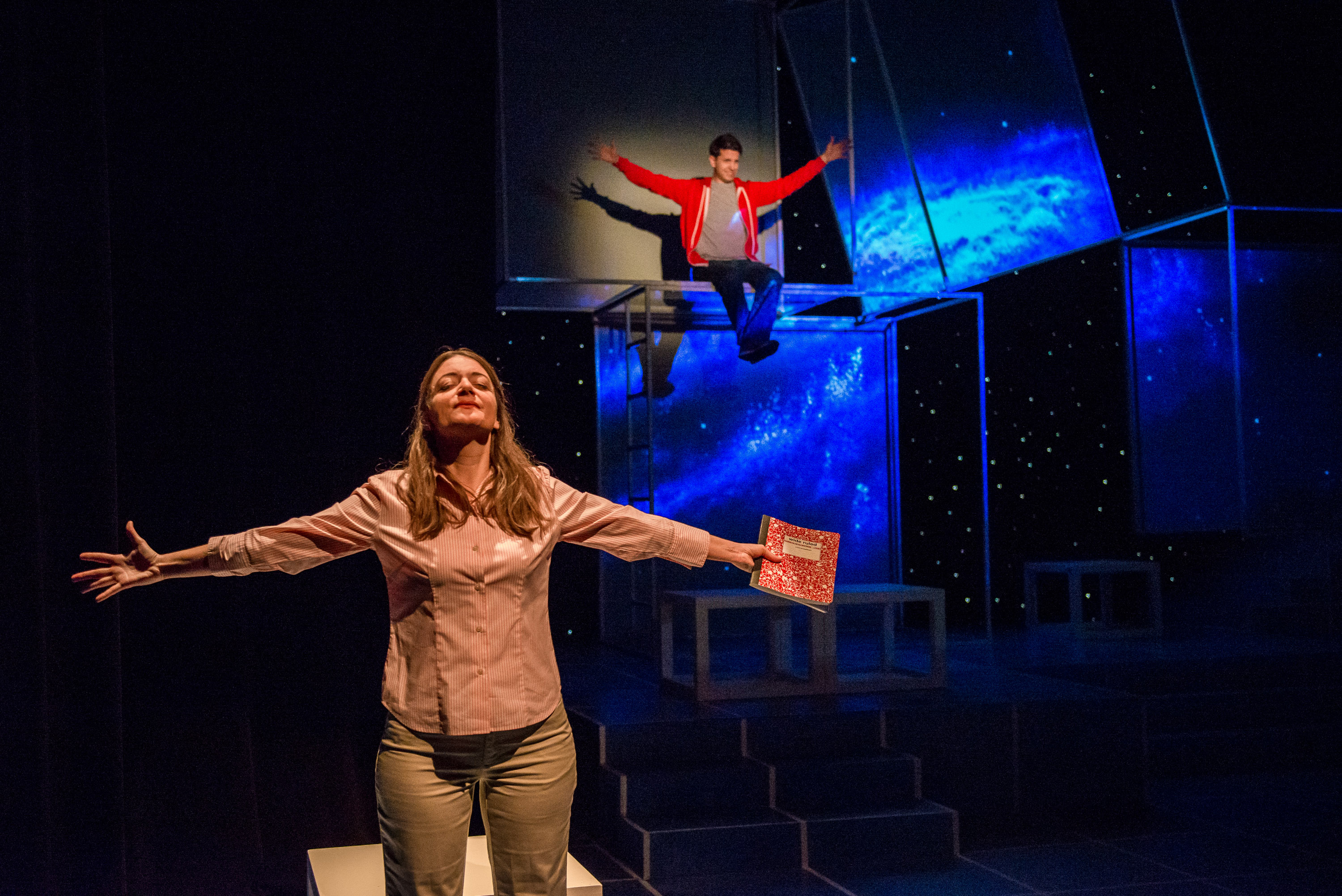 The power of theater to summon different worlds, to so fully immerse an observer inside a compelling story that day-to-day life thoroughly recedes, is abundantly at play in Zoetic Stage’s exquisite new production of “The Curious Incident of the Dog in the Night-Time” in the Carnival Studio Theater at Miami’s Arsht Center.

Winner of multiple Olivier and Tony awards, Simon Stephens’ 2012 play is based on British writer Mark Haddon’s 2003 novel about 15-year-old Christopher Boone, a math genius on the autism spectrum.

The title comes from a line uttered by Sherlock Holmes in an Arthur Conan Doyle short story. After Christopher discovers at the top of the play that someone has gruesomely murdered the neighbor’s dog, he turns detective to find the perpetrator. But what he discovers in the course of his investigation unravels other mysteries, shattering illusions, propelling him toward a greater maturity.

“Curious Incident” is a complex, multicharacter play-within-a-play told from Christopher’s point of view, laying bare his thought process, coping mechanisms and quirky brilliance. It is highly theatrical – a “park” is created, for example, by four actors holding leafy branches, which they sway in time to the sound of a breeze – and intricately technical. For instance, when Christopher drops three imaginary food pellets one by one into his pet rat Toby’s cage, the audience hears a precisely timed “plink … plink … plink.”

Zoetic artistic director Stuart Meltzer is the man at the helm of “Curious Incident,” and he functions here like a maestro stirring his collaborators, onstage and off, to virtuoso performances.

Ryan Didato gets the role of his still-unfolding career as Christopher, a boy half his age, a teen toggling between his powerful emotional limitations and his limitless imagination. His precise way of walking involves straight lines and 90-degree turns. His aversion to being touched and his stunned reaction to parental betrayal lead to sudden meltdowns, as he screams, writhes, covers his ears and breaks your heart. Impeccable in his accent and physicality, Didato makes the journey inside Christopher’s mind harrowing, hopeful and deeply touching.

As Ed, the teen’s father, Stephen G. Anthony gives a beautifully layered performance as a flawed but dependable man whose love for his challenging son has never wavered, so much so that Christopher’s sudden estrangement from his dad becomes a kind of shared pain between actor and audience. As Judy, the boy’s more adventurous mother, Niki Fridh has her own moving arc, evolving from a self-doubting woman who ran from the burdens of her family life into a mother determined to help her full-of-promise son push forward.

The radiant Gretchen Porro plays Siobhan, Christopher’s teacher, guide and confidant, with a sunny certainty. She is the play’s occasional narrator as she reads from her star student’s journal, and she’s an intellectual and emotional lodestar to a young man who very much needs one.

Margery Lowe’s array of characters includes a vengeful neighbor, the head of Christopher’s school and the sexy face of an ATM. Zach Myers artfully plays the neighbor’s troublesome ex and others. Michael McKeever is a cleric, Christopher’s uncle and, though Christopher pronounces him “too old” for the role, a policeman. Particularly as an older neighbor who is kind to Christopher but too careless with a secret, Barbara Sloan is persuasive physically and emotionally. Seth Trucks is an efficiently sympathetic London policeman and others, while New World School of the Arts senior Rachel O’Hara plays a variety of young women.

Although the play moves from Christopher’s hometown of Swindon in Southwest England to London and back, the teen’s way of looking at and organizing the world drives the design.

Because Christopher thinks mathematically, set designer Michael McClain has created four large cubes to serve as the home for Greg Duffy’s animations and Steve Covey’s projections. The play’s title appears and vanishes. Some numbers join with words to track locations, while others represent Christopher’s self-calming recitations/calculations.

In “Curious Incident,” the mind of Christopher Boone is fascinating, his journey riveting. So, too, is Zoetic Stage’s latest production.

“The Curious Incident of the Dog in the Night-Time” is a Zoetic Stage production in the Carnival Studio Theater at the Adrienne Arsht Center for the Performing Arts, 1300 Biscayne Blvd., in Miami. It runs through Feb. 3. Performances are 7:30 p.m. Wednesday-Saturday and 3 p.m. Sunday. Tickets cost $50 and $55. Call 305-949-6722 or go to ArshtCenter.org.