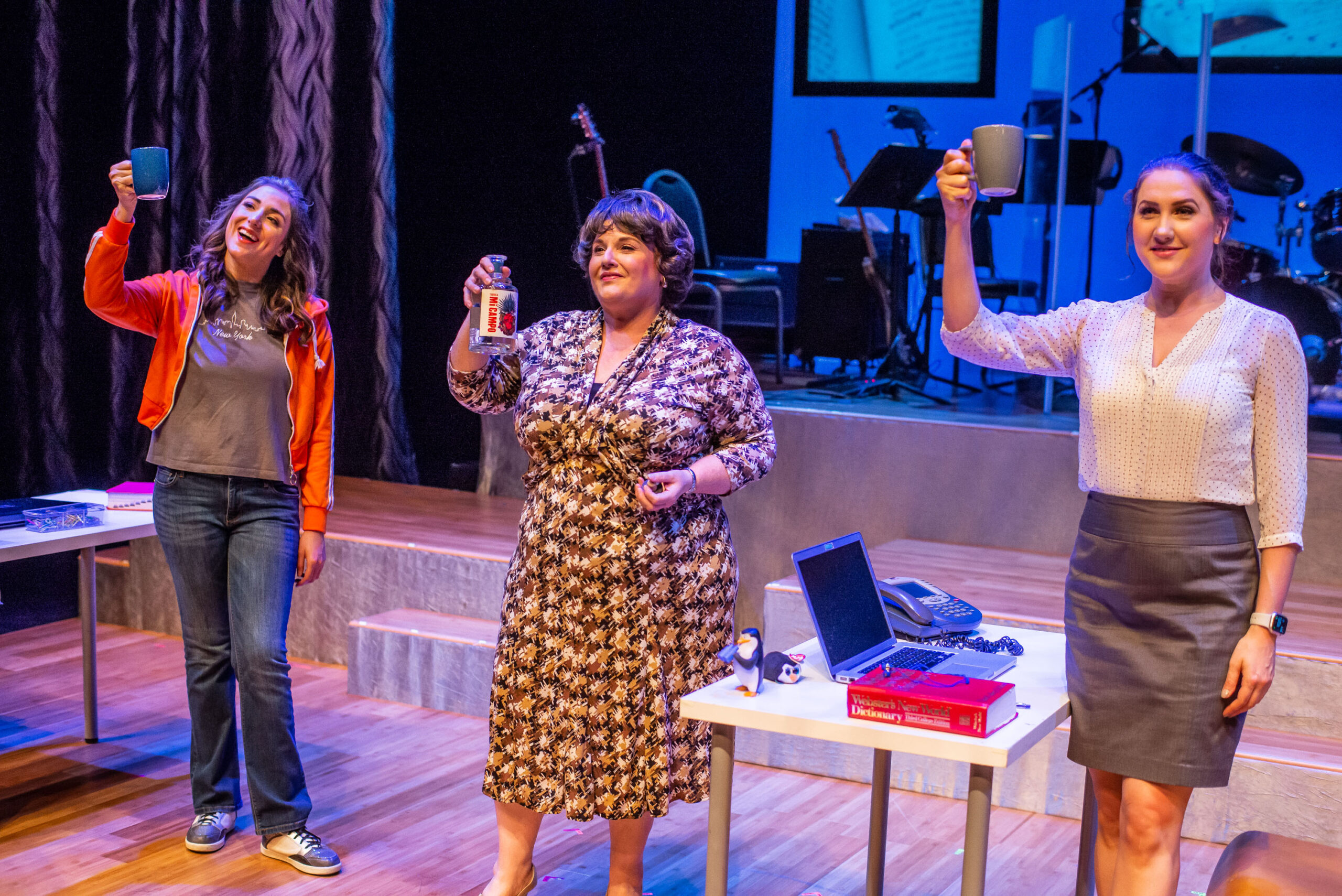 Diana Garle, Margot Moreland and Lindsey Corey share a celebratory toast in the 25th Summer Shorts festival through July 2 at the Carnival Studio Theater at the Arsht Center. (Photo courtesy of Justin Namon)

After a two-year pandemic pause, Miami’s City Theatre is finally celebrating its 25th anniversary in the best way possible, presenting a Summer Shorts festival that amply demonstrates the engaging allure of short-form comedies, plays and musicals.

In these tumultuous times, the festival is a celebration of the art and craft of playwriting, the versatility of skilled actors, a director’s vital invisible hand, and a dedicated company’s presentational inventiveness.  To borrow a term from Marie Kondo, Summer Shorts sparks joy, and it has returned none too soon in fine form.

Playing through Saturday, July 2 in the Carnival Studio Theater at Miami’s Arsht Center, the back-in-business Summer Shorts consists of 10 varied plays and musicals.  Some are new versions of favorites from past festivals.  Others are world or regional premieres.  Start to finish, the quality of the work remains high.

This year’s festival, which runs two hours plus a 15-minute intermission, has some fancy anniversary tweaks.

The musical accompaniment and stand-alone tunes that carry the audience from play to play come from a live four-piece band assembled by music director Caryl Fantel. 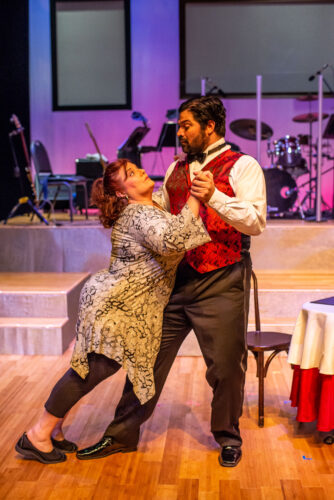 As is the case at many theaters now, only digital programs are offered via a scanned QR code, but City Theatre came up with a great work-around: With a few exceptions, each playwright offers a brief video introduction before his or her play.  It’s a nice user-friendly, clarifying touch.

The fun begins with Daniel Hirsch’s “A Small Breach in Protocol at Big Rick’s Rockin’ Skydive Academy,” a short comedy with one very long title.

(See the preview of the Summer Shorts festival by clicking here.)

Directed by Elena Maria Garcia, one of South Florida theater’s comedy masters, the piece features instructors Tina (Lindsey Corey) and Chad (Daniel Llaca) jumping out of a plane as they’re strapped to a pair of first-time skydivers. Extremely apprehensive Rae (Stephon Duncan) and exhilarated Alicia (Diana Garle) are a couple, and they’re having an adventure courtesy of Groupon. Rae contemplates death on the way down, and not just because she’s hurtling toward the ground.  Hirsch’s message: No matter how long or short your life, savor each day.

“A Little Bit of Culture” by the late Staci Swedeen was first done at the 1999 Summer Shorts festival.  Businessman Kenny (Tom Wahl) and arts aficionado Charlie (Alex Alvarez) have gone to a concert, and before long the overtired Kenny is nodding off and snoring.

Charlie elbows his husband and gets plenty irritated. Soon, Kenny is on the verge of checking out again, but then in fantasy, he takes the stage and does his own wacky version of “Swan Lake.” With graceful direction by Gail S. Garrisan and a mini-star turn by Wahl – sign this guy up for the Les Ballets Trockadero de Monte Carlo – “A Little Bit of Culture” is a tiny treasure about the different ways we connect with the arts. 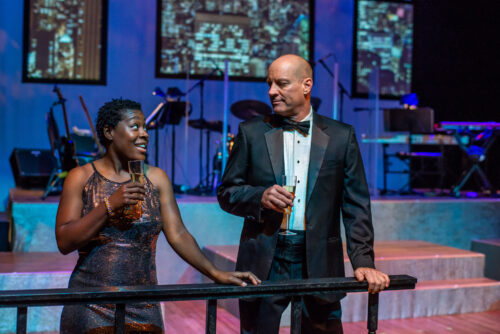 Directed by James Randolph, the world premiere of Amy Berryman’s “Winner” explores the same sort of thematic territory as Claudia Rankine’s “The White Card,” produced at GableStage earlier this year.

Duncan is Tori Walker, a Black playwright in her early 30s, who has just won a coveted award. She has bested three-time Pulitzer winner Charlie Harvard (Wahl), a white writer whose comeback play was 10 years in the making.  Elegantly dressed in formal wear, the two talk on a New York balcony at an after-party in her honor. At first, their exchanges seem friendly enough. She’s a longtime admirer of his work; he has been impressed by hers.

Before long, the gloves come off as the seriously soused Charlie suggests Tori’s win had as much to do with her race and gender as it did with her buzzed-about play. Duncan and Wahl skillfully portray the combatants in this short but incendiary piece.

Pulitzer-winning playwright David Lindsay-Abaire and director Garrisan deliver the festival’s flat-out funniest play. “Misdial” involves cell phones, three women named Amy (Corey, Garle and Margot Moreland share the name), and Fran (Duncan), who has two pairs of contacts stuck in her eyes and can’t get them out. Her possibly ex (but still loving) boyfriend Malcolm (Alvarez) also joins the increasingly confusing conversation.  The perfectly timed comedy is the cellphone equivalent of a door-slamming farce, and everyone is hilarious.

The program’s first half closes out with a reboot of Lin-Manuel Miranda’s “21 Chump Street,” a compact musical first done in the 2017 festival.  Narrated by Wahl, the story follows high school senior Justin (Daniel Llaca) as he crushes on new girl Naomi (Garle), a beauty shrouded in mystery.  Much trouble – serious trouble – ensues. 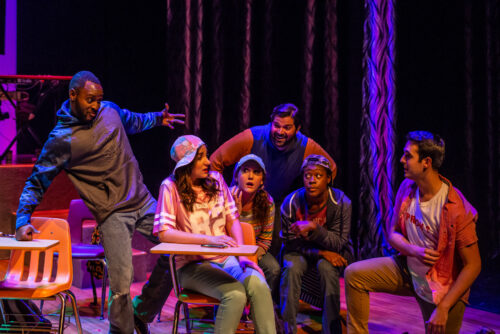 Director Margaret M. Ledford, who is also City Theatre’s artistic director, guides a cast that includes Jovon Jacobs, Corey, Alvarez, Moreland and several festival interns to performances worthy of a surefire Miranda hit. The ear-worm music has echoes of his “In the Heights” and “Hamilton,” and Sandra Portal-Andreu’s choreography is a piece of electric beauty.

Written by hot-right-now playwright Dominique Morriseau and staged by Randolph, “Night Vision” focuses on an expectant couple shaken by an encounter in the park near their apartment.  Ayanna (Duncan) and Ezra (Jacobs) have shifting interpretations of the violent incident they witnessed, and as they debate calling the police, the complex undercurrents of race come into play.

Dead-serious lexicographers encounter a social media tsunami in Jacqueline Bircher’s “Webster’s Bitch,” a smart comedy staged by Michael Yawney.  Focused Gwen (Corey) and her snippy colleague Nick (Llaca) are on deadline for weekly online updates of Webster’s Dictionary.  Gwen’s smilingly disruptive sis Ellie (Garle) raises a ruckus about going out for tequila, then drops a bombshell gleaned from Twitter: Their editor-in-chief has called Joyce (Moreland), their immediate supervisor, “my bitch.” And there’s video. Frantic chaos doesn’t begin to describe the aftermath of that discovery. 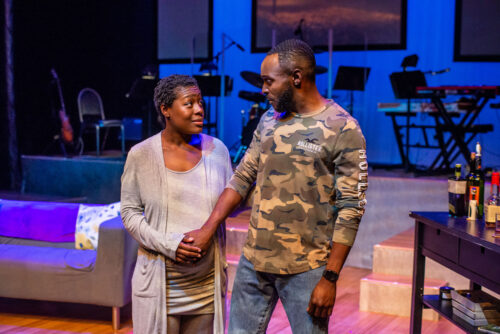 “Tango! The Musical!” by City Theatre co-founder Susan Westfall and composer-lyricist Joe Ilick, offers a new take on a play first produced at the 2013 festival.  Director Ledford and her savvy cast – Wahl as set-in-his-ways hubby Joe, Moreland as his dutiful wife Sandy, Alvarez as the charismatic server Carlos, Garle as his beautiful coworker Maria – convey all the humor, poignance and reawakened connection in the tango-infused piece.  Moreland’s responses to Alvarez, who oozes sensuality as he guides her around the dance floor, are priceless.

Festival favorite Steve Yockey has contributed another world premiere, “Go Get ‘Em, Tiger!.”  Staged by Yawney, the play finds husband John (Alvarez) and his wife Linda (Corey) in hot water as they sit in a holding room at the zoo.  Linda, it seems, dropped her purse into the tiger enclosure, so John hopped in to retrieve it.  He’s a little dirty and sporting some claw marks, sure, but he’s alive.  The deadpan funny Zookeeper (Llaca) arrives to try to make them feel as terrible as possible, then sends in a guest who has asked to speak with them: none other than the Tiger himself (Jacobs).

Endlessly inventive designer Ellis Tillman, who has created innumerable Summer Shorts costumes through the years, outdoes himself in dressing the Tiger. Jacobs sports a flashy tiger-striped suit and glittering gold slip-on shoes, and his delivery sounds a bit like Idris Elba trying out tiger growls.  He’s the very definition of a glorious scene stealer in a play that, for all its early laughs, takes a serious turn.

The 25th edition of Summer Shorts wraps up with Rolin Jones’s “Chronicles Simpkins Will Cut Your Ass.”  Directed by Garcia and first staged at the 2008 festival, the bonkers play features a terrorizing trio of fourth-grade girls – Chronicles Simpkins (Corey), Rachel Melendez (Duncan) and their dental headgear-wearing pal Jessica (Moreland) – who bully one and all on the playground. 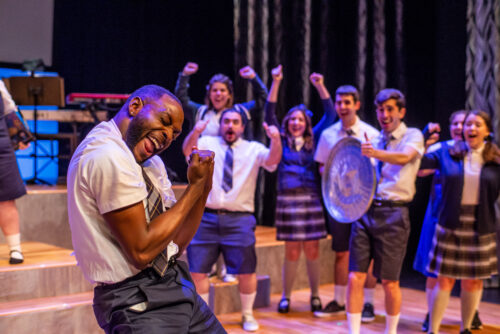 Tetherball champ Chronicles is only too happy to take on sixth-grader Billy Conn (Jacobs) in her preferred form of warfare.  But she plays dirty, and when the principal Mr. Finkel (Wahl) gets involved, Chronicles and her girl gang do their best to mess him up too.  Jones’s play is funny, but it’s also anarchic and unsettling.

So, too, do the masterful actors, who change costumes and characters in a matter of seconds.

If you’ve been to past Summer Shorts festivals, you should know that the 25th is especially strong.  If not, and you need some laughter in your life, City Theatre is ready to make that happen.