Young, Old of All Backgrounds Love Their ‘Nuts’ 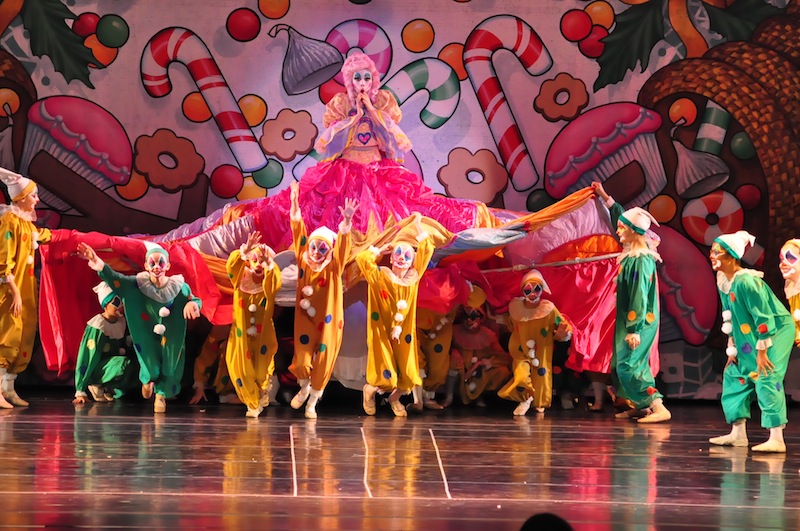 The December holidays are approaching and along with them, as sure as thicker waists and thinner wallets, The Nutcracker. Big-scaled or modest, all-local or propped up by imported talent, there’s a production of America’s most popular ballet to suit any taste.  But please don’t take the predictable assortment for granted or chuckle too readily at insider jokes: Who quipped that every Christmas just finds us another Nutcracker closer to death? Going to watch this dance is one of our few artistic and cultural rituals, which not only keeps studios busy and theaters full but also bolsters time-tested values.

Ruth Wiesen, director of Thomas Armour Youth Ballet, the oldest dance organization in South Florida, attests to the power of The Nutcracker.  “Our activities throughout the year reach beyond our South Miami headquarters to four satellites that go from Little Haiti to Cutler Ridge,” she explains. “The Nutcracker is the only event that brings all those populations together, reflecting the diversity of our area. The audience can see itself on stage, and that sends out a very positive message.”

Wiesen lauds how communal hard work and a dedication to artistry give rise to what she calls “a big, wonderful magic-making machine.”  Following auditions at the end of August, 12 weekends of rehearsals at TAYB and New World School of the Arts — a production associate — engage five studios and an equal number of teachers in preparing 160 performers for the show. They learn the choreography of Russian sources (the ballet premiered in St. Petersburg in 1892 to Tchaikovsky’s buoyant score) as set by the late Martha Mahr, a legendary local teacher. This year guests from the Charlotte Ballet will dance the Sugar Plum Fairy and her Cavalier.

Quite a few of the young participants go on to dance professionally in well-regarded companies, but ultimately the worth of involvement in The Nutcracker can be measured in personal growth.  “Our students learn to pay loving attention to small details for the success of something larger than themselves,” Wiesen says.

The economic benefit of The Nutcracker, of course, is also huge. Some organizations make nearly half their yearly income from this event. But commerce here does not forsake the spirit.  For instance, the South Miami-Dade Cultural Arts Center welcomes the booked performances of The Nutcracker put on by Miami Youth Ballet, which is “a great partner in our mission of sharing arts and culture with our community,” according to Carla Hill, education and outreach manager at SMDCAC. She singles out the show’s accessibility to young people and their families as a strong incentive for them to keep coming back to live performances.

Even at a professional company such as Miami City Ballet, more than ticket sales turn The Nutcracker into a seasonal phenom.  As MCB ballet master Joan Latham puts it, “We have more performances of Nutcracker than other ballets, a great opportunity for dancers who don’t normally get to dance principal and soloist roles. We will often invite advanced students to perform with the corps de ballet. It makes them stronger and helps prepare for a professional career.”

And The Nutcracker stays with dancers for the long run. MCB principal Patricia Delgado, whose Sugar Plum Fairy will once more charm audiences in the coming days, appreciates this ballet as a road marker. “Dancing this at first was a challenge, now it’s a treat,” she says.  “As a kid I saw Sugar Plum as the epitome of a ballerina. My interpretation in the beginning was as a young princess. Lately I project her more as a maternal regal presence.”

Adding novelty to Delgado’s upcoming performances, recent-arrival Rainer Krenstetter will partner her as the Cavalier, dancing MCB’s Balanchine version for the first time. Set to bring his flair for the lyrical to the role, he calls their pairing “a really good fit.”

Artistic considerations aside, Delgado and Latham agree that The Nutcracker also appeals by tugging at the heartstrings. Recalling her many times on stage, the ballet master says, “There is certainly the drudgery of doing the same parts year after year, the physical exhaustion, and of course the endless snow flakes!  They were everywhere—not just in my nose, stuck on my eyelashes, and all over my theater case.  But The Nutcracker also meant comfort—time shared with my closest friends, a secret Santa at the theater, and Christmas shopping between shows. I have three children and witnessing their excitement at the ballet reminds me just how magical it is.”

This year’s show will feature some of the greatest and most established classical ballets.
Continue Reading

Choreographers unite in outdoor performances for the pl...

Michelle Grant-Murray crafted a show inspired by memories of her grandmothers and their traditions.
Continue Reading