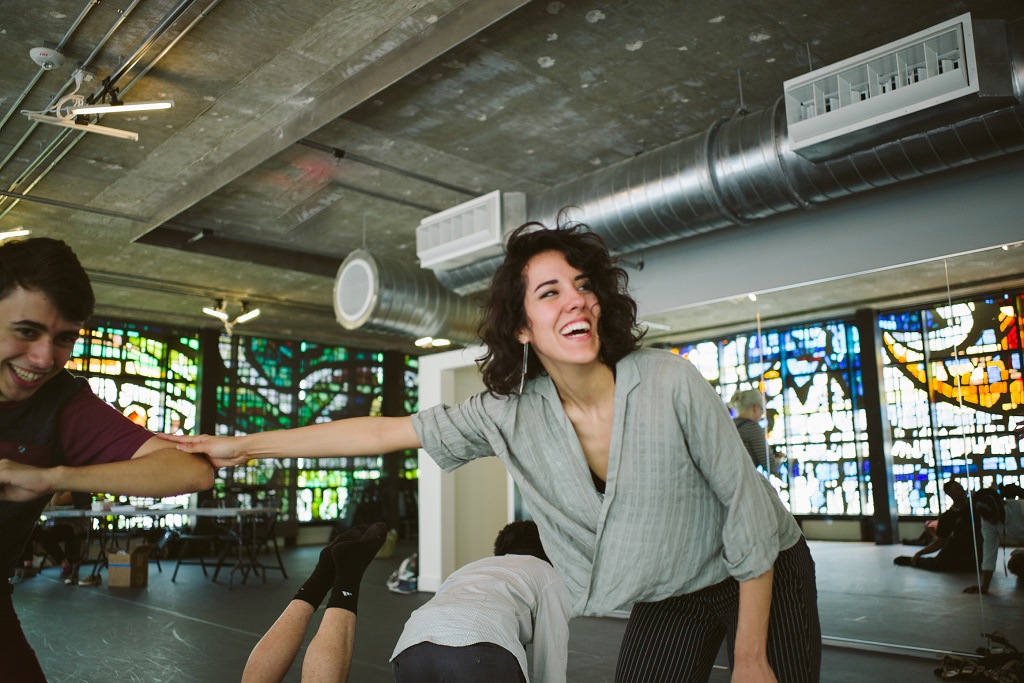 On a chilly day last fall, Miami-born artist Yara Travieso was sitting in her Brooklyn backyard in a beach chair talking about a performance she was planning for Miami’s YoungArts Plaza. “It’s very weird,” she said of her current location, “because it’s cold.”

While she no longer lives in Miami, Travieso says she still has an umbilical cord attached. Hurricane Irma had just blown through the city, leaving downed trees and twisted street signs. She felt it from afar.

Meanwhile Hollywood was under the influence of a different kind of storm, with sexual misconduct staining the careers of powerful men, and a surge of #metoo stories had just hit the internet.

Some forces have since settled, but they are repetitions of age-old themes that Travieso has harnessed for her upcoming multimedia performance. “El Ciclón,” shows on Saturday, May 12th at the YoungArts plaza as part of the YoungArts Outside the Box series.

The National YoungArts Foundation nurtures promising young artists in visual, literary, design and performing arts, and assists them throughout their careers. Its Outside the Box series brings YoungArts alumni back to Miami to produce creative work for an outdoor space, free and open to the community.

Travieso, a 2005 YoungArts alumna, has reimagined the YoungArts plaza as a minimalist mylar swamp swimming with alligators. A series of cars will light the stage and provide the sound, and the audience will be transported into a story of a moral dilemma.

The main character in “El Ciclón,” Ava, gets stranded in the swamp. Her car won’t start. As she’s trying to escape her own situation, she hears a man pleading for help in the darkness. What follows is an internal struggle: should she try to rescue him or save herself? The story gets more complex when a news broadcast plays on the radio in the background—a violent crime was committed towards a woman—and the man in the swamp fits the description of the perpetrator.

As an artist, Travieso constructs fictional female characters through multimedia storytelling. She draws from dance, opera, theater, film, music and the visual arts. “I’ve been able to visit a lot of different worlds,” says Travieso. Locally, she made a major imprint on Miami’s cultural scene as co-founder of the Borscht Film Festival. She also trained as a dancer at New York’s Julliard School, and performed as a dancer with New York’s Metropolitan Opera.

In her early professional life, she found she was producing films for men, and often had to struggle to be taken seriously in positions of authority because she was seen first as a dancer and a woman. She wanted a voice of her own. “Frustration and anger fueled me to really push myself to do the things I always wanted to do—my own work—my own vision.”

When she began producing her own projects, Travieso says, “I wanted to create these really wild works, and there was no precedent for them.” Storytelling and imagery are at the center of her creative process. “A lot of my work is around specific women,” she says, “and I try to use different tools to push the story.”

Empathy is the superpower bestowed on her female characters. They are not your typical heroic figures—they are complex, simultaneously strong and vulnerable. And, she says, they are fed by her own personal and professional struggles as a woman.

She sometimes makes reference to Greek mythology or other traditional stories. “This new character for YoungArts feels like a myth,” she says, “but it’s a totally new story. I love the timelessness of the Ava character.”

While Ava was conceived well before the #metoo stories hit social media with such force, she says, there is a resonance between them. “This narrative that we’re seeing has been underground for a long time,” says Travieso. “Every creative milestone of my career, I have had a huge ‘me too.’”

“I think there’s something in that metaphor of pulling the man out of the swamp,” Travieso says of her YoungArts project. “The swamp is stagnant, it’s heavy. It’s not moving and he’s stuck in it. And the idea of the woman sacrificing her life, her time, her energy, putting her life and existence on hold to save this man, that’s a daily act.”

Travieso’s project for the Outside the Box series is born from a longstanding relationship with the organization. She was a recipient of the YoungArts award in 2005, an honor given annually to artists age 15-18 from around the country. Since then she has continued to work with the organization as a teacher and performing artist.

Travieso credits YoungArts for giving her complete freedom in the production of “El Ciclón.” “I feel like something happened when I was given the liberty to make this project,” she says. “It’s that free sensibility as an artist to tell your stories from a place of freedom, not from a place of fear.”