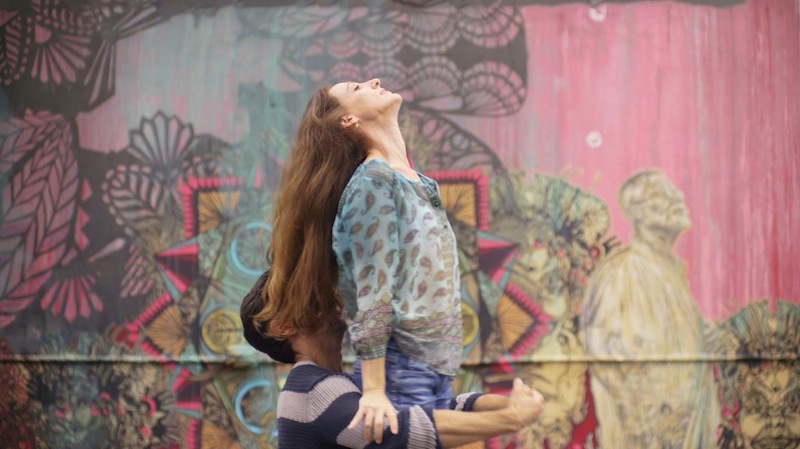 Commissioned to create a new dance for Miami City Ballet, Justin Peck ran up against a wall — many, in fact. Lucky for him, these loomed among the ones with vibrant colors and suggestive figures that have turned the streets of Wynwood into an open-air art museum, a source of inspiration for the 27-year-old choreographer whose still brief but notable career includes a cache of critically-acclaimed ballets.

Shepard Fairey’s contribution to Wynwood Walls had a special impact on Peck. He endorsed recruiting the famed muralist to paint the backdrop for Heatscape, the world premiere in “Points of Departure,” MCB’s last program of the season.

This visual contribution draws from the iconography and palette identifying Fairey — well-known for the Obama Hope poster — as a socially-engaged purveyor of undismissable images. But for Heatscape, the artist made sure to block colors and simplify outlines so as not to interfere with the dance. The graphic complement gives a sense of place and aids in delineating the performers in the trace of their energy, thus supporting one of Peck’s primary goals.

“I was drawn not just to Wynwood but also to the company and wanted to make my work specific to the personalities here,” the choreographer says.

Chutes and Ladders, a pas de deux the New World Symphony in collaboration with MCB commissioned from Peck in 2013, already gave him a close-up view of the local dancers. During visits to MCB’s South Beach studios, he’s sometimes even taken their company class. But the kinship goes deeper, since he shares an artistic formation in Balanchine. A product of the School of American Ballet, Peck was accepted just eight years ago into New York City Ballet, where he now dances as soloist and since last summer has flourished in the role of resident choreographer.

Peck recognizes how mutual familiarity enhances the process of creation. “This feels more customized,” he says.  “It lets me push dancers further in their ability.”

When the choreographer came down last week to conduct home-stretch rehearsals, he was delighted by the high gloss his cast had achieved. “I think the audience will notice how sharp the dancers look. It says a lot about them.”

Michael Sean Breeden, a corps member at MCB, is one of the gifted participants in the premiere. Brisk in his phrasing and crisp in projection, this dancer has been a very appealing presence so far this season; for example, in Twyla Tharp pieces. But he’s thankful for the opportunity Heatscape affords him.

“It’s fast, and Justin wants huge movement. His is a kind of extreme classicism,” Breeden says. “I can get exhausted but feel great about it.”

The dancer appreciates how the choreographer challenges traditional ballet hierarchy. While principals lead the three sections of Heatscape, they also meld into the ensemble and, in turn, corps members get to show off their individuality. “The work is about community — about all of us as people,” affirms Breeden.

Having known Peck since their days at SAB in New York, Breeden finds that a personal bond enriches a professional relationship. “Once in the studio even good friends recognize the choreographer’s authority, and we maintain respect for each other. It’s so important that we get to work with living artists. People like Justin are the voice of our generation.”

Like Breeden, principal Renan Cerdeiro welcomes this interaction with contemporary choreographers MCB artistic director Lourdes Lopez has been eager to foster. “I’ve had a great time,” he says. “You can see Justin thinks a lot about what he’s giving us to do, and that kind of study makes the dance very special. I’ve never had anything choreographed on me like this before, and it’s very gratifying.”

Cerdeiro is especially impressed by the way Peck’s movement, while often demanding, retains a winning naturalness. “This produces something really beautiful, as in the first movement, which is super fast — hyper! But as I dance it with Patricia [Delgado], I can’t help wearing a smile on my face. I feel she and I don’t have to act it. Justin just lets this sort of happy relationship happen.”

According to Cerdeiro, what takes the choreography to a higher plane is Peck’s nuanced response to the music. “All along, as the music remains very forceful, there has to be purity in the steps.”

The influence of Fairey’s public art on Heatscape not withstanding, Peck — who’s often praised for his musicality — admits that in his creation of a dance the score comes first. “Choreography,” he says, “to some degree turns into an excuse for me to understand the music with the dancers.”

In Czech composer Brohuslav Martinu’s Concerto for Piano and Orchestra No. 1, with both its liveliness and lyricism, Peck has found a sporty spring and contrapuntal richness to help give his dance an expansive spirit. Featured on the program alongside Balanchine’s Raymonda Variations and Jerome Robbins’ The Concert, Heatscape promises to leave its mark as a signpost to the future of ballet.

“It’s an honor to be on the bill with two choreographers who’ve had a big influence on me,” Peck says. “I’ve danced the first pas de deux in The Concert quite a bit at New York City Ballet, and Robbins is brilliant in using his idiom to come up with so many absurdist comedic moments. Then Raymonda allows us to see the range of ballet and what these versatile dancers can do with classicism.”

Balanchine and Robbins can rest in peace: with Peck, they’re in good company.

Miami City Ballet’s “Points of Departure” with the premiere of Heatscape begins its tour at the Kravis Center in West Palm Beach on March 27, and continues to the Arsht Center for the Performing Arts, 1300 Biscayne Blvd., Miami from Friday, April 10 through Sunday, April 12, at 8:00 p.m., on Sunday at 2:00 p.m.; tickets $20 – $175; www.miamicityballet.org.