‘Writing in Sand’ Tales From Our Shores 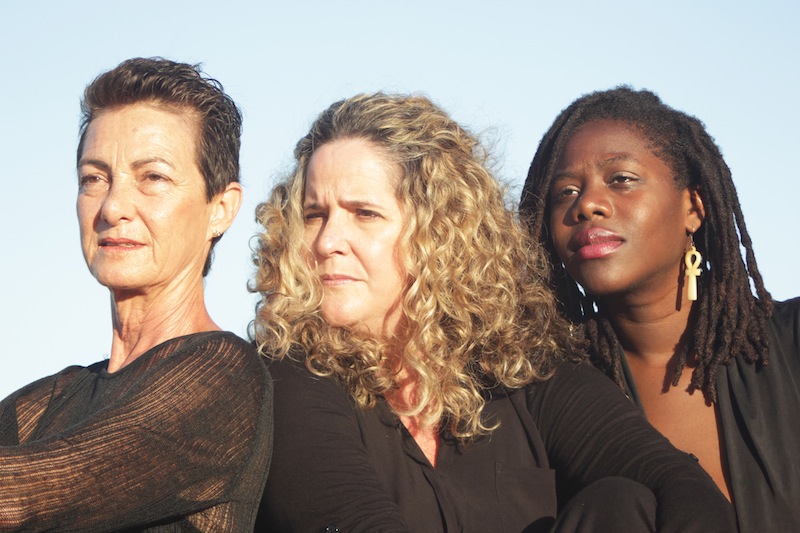 Like with so many others that have come to Miami from somewhere else, the lives of three specific local artists are part of the story of this city. A story sometimes as fugacious as the waves that wash whatever is written in sand.

That’s why Cuban actress Mabel Roch, Brazilian dancer and choreographer Lucia Aratanha, and Haitian singer and musician Inez Barlatier are Writing in Sand/Escribiendo en la arena, so they can tell their own stories.

Writing in Sand/Escribiendo en la arena, at the Miami-Dade County Auditorium On.Stage Black.box this Friday and Saturday, is the fourth production presented this year by FUNDarte as part of its series Miami On Stage: Knight New Works.

In 2012, the South Florida based-nonprofit arts organization received a Knight Arts Challenge grant that allowed it to stage four very different shows, yet all with one theme in common: to showcase local artists and help them develop a piece that they could then take somewhere else if they wished to do so.

“It is the last of four shows 100 percent created in Miami by artists that live here,” says Ever Chávez, founder and executive director of FUNDarte.

“Carlos Caballero came up with the idea for this production, which tells, through acting, dancing, and music, some of the personal stories of these Miami female artists,” continues the Cuba-born Chávez. “It is a multicultural and multidisciplinary show that presents the life experiences of these women, and we wanted to bring them all together.”

The sands of time

The image of sand being washed away, Chávez adds, represents what happens when someone from another country, or from another culture that is rooted here, comes to Miami and has to start from scratch, whether that person is an artist or not. “From the conversations, the questions, that Carlos had with the three artists, Mabel, Lucia, and Inez, the piece began to take shape,” says Chávez.

The creative process started a year ago, says Caballero, a veteran Cuban actor and director who has made a name for himself both here and abroad. This past May, he began to work with the three artists. Caballero started with a blank canvas, asking questions such as “What does Miami mean to you?” and “What kind of baggage from your culture, from your country, did you bring here?”

The answers would become the text with which Caballero and writer/playwright Griselda Ortiz worked with in order to create the show. Also collaborating with the production would be Nicole Martínez. The general idea was that each artist would tell her own story through their art: Roch by acting, Aratanha by singing, and Barlatier by singing. Expect then a bit of all these languages on stage, though the production is mostly in Spanish with English subtitles.

Something Caballero had clear was that he wanted to explore three specific points that were central to the piece and that had to be represented by the artists themselves: a person before arriving in this country; someone who has just come to this new land; and the individual who has spent 20 years here.

“Inez was born here, but she is representing the Haitian culture, which I wanted to include. She is acting in the name of a generation,” explains Caballero. “I told her ‘Feed off the experiences of you aunts, your grandmothers’.”

Although for Caballero Writing in Sand/Escribiendo en la arena, is not political per se, the piece does showcase some of the realities of this very fragmented community. And that’s why it was so important for him to bring together different groups.

“For me, it has been wonderful, because I have learned so many things from Brazil and Haiti to add to my Cuban experience,” he says. “I am Cuban, Mabel is Cuban, and Griselda is Cuban, but this is not about Cuba. It’s about Miami’s immigrant women.”

Haitian-American Barlatier could relate to that, as the daughter of an immigrant, renowned Haitian musician Jan Sebon. Through word of mouth, she came to Caballero’s attention.

“No matter where we come from, the stories themselves are all the same story,” says Barlatier. “Of losing your identity by coming to a new place in search of hope. You don’t entirely give up your identity, but once here, you have to gain a new one. You have to be born again.”

From birth to fruition, Writing in Sand/Escribiendo en la arena, was very work-intensive, says Caballero. But for everybody involved, it was worth it: “I think that, more than showing the differences in these communities, while searching for answers we found more commonalities among them.”