‘Whirl’ to Light Up Vizcaya 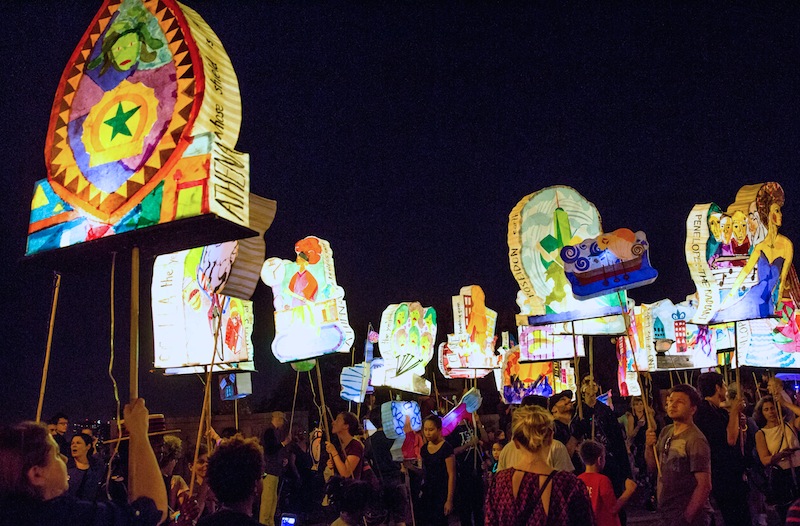 This month, Sophia Michahelles and Alex Kahn from Processional Arts Workshop (PAW) will light up Vizcaya’s grounds with giant fantastical lanterns and moving sculptures. PAW’s experiential and community-oriented events, inspired by carnival processions and parades, have appeared around the country and internationally. Their Vizcaya project, Whirl, will move through the estate’s landscape at twilight and into the night. The lanterns and sculptural pieces, based on the work of artist R.W. Chanler, will be made collaboratively in workshops open to volunteers. Locals can also perform in the piece as well. We spoke with Sophia and Alex recently to find out more about their ideas and inspirations.

You mostly work with processions as a form. How did you get started?

Alex: Our origins were in the Halloween parade in New York City, essentially the largest art parade in the country. Since 1998, we have done the theme that sets the tone for the parade that given year. As we started doing the parade, we started getting interested in, what would it be like to bring not only the final performance, but also the means by which we built the performance, to other communities through a kind of shared building process that we call “puppetraisings”?

How is the experience of working collaboratively with the community?

Alex: We’ve sort of become anthropologists. You learn an enormous amount, at a level that you don’t often see in history books. It’s what people who are walking through the door have to say about where they are right now. Sometimes it’s political, sometimes it’s about their own artistic legacy or sometimes it’s more whimsical. You never know what it will be. But we’ve gotten very good at channeling that energy into something that still has artistic integrity and continuity. And that’s kind of our job in this situation. Even leaving decisions about color and choice of imagery and how things will move through the environment.

You may have somebody coming in who comes from an advanced stained-glass background and they’ll have one approach. And they’ll be working next to an aspiring 12-year-old artist who wants to go crazy with expressionistic color. So we control it up to a point but you have to know, as in any carnivalesque form, where to allow a little bit of that chaos of the community having their own say. And that’s doubly true in the performance where everybody has a different way they move, everybody has a different attitude towards navigating and performing.

What is your vision for the Vizcaya event?

Sophia: At Vizcaya, we are very much drawing on our experience of creating large-scale, volunteer-based processions. But it will be more of a performance. The audience will have the opportunity to wander the grounds and discover the piece as it happens. There will be moments where the visual elements will come together and there will be moments of more density and moments where it’s more dispersed throughout the landscape.

Alex: In many ways that’s appropriate for Vizcaya’s environment because if you started out in a parade, it would be a very short parade. So how do you take a relatively small space and circulate people in interesting ways so that they have encounters with images that are exciting and have an overlay of discovery rather than presentation?

Who is R.W. Chanler, the artist who inspired Whirl?

Sophia: The house has two works by Chanler. There’s a swimming pool that’s half indoor and half outdoor and it has this amazing ceiling that’s an impasto-encrusted plaster painted ceiling with fish and sea creatures and seaweed and all sorts of marine life, mostly local but some of it not. The artist was actually my great-great uncle. He was quite famous in his day, and in that time, trying to define what American Modernisim is. After his death in the ‘30s, his work fell out of favor quite fast.

We very much have a kindred spirit with Chanler. He loved to alter space and there’s a playfulness to his work that fits perfectly with our work and also with the way that Vizcaya is laid out. There is this real scenography to the entire space and so it seemed like a perfect place for us to create a new site-specific performance.

The performance on July 30 is open to the public; guests don’t need to have participated in the workshop portion of the program in order to attend. Performance tickets are $10, general admission, and $5 for Vizcaya members. For more information, www.vizcaya.org.

Participation in the July 30 performance is not a requirement for workshop registration, but at least one workshop is required to serve as a cast member during the performance. If you have questions, please review the FAQ section of the Registration page below or email us at rebecca.peterson@vizcaya.org.