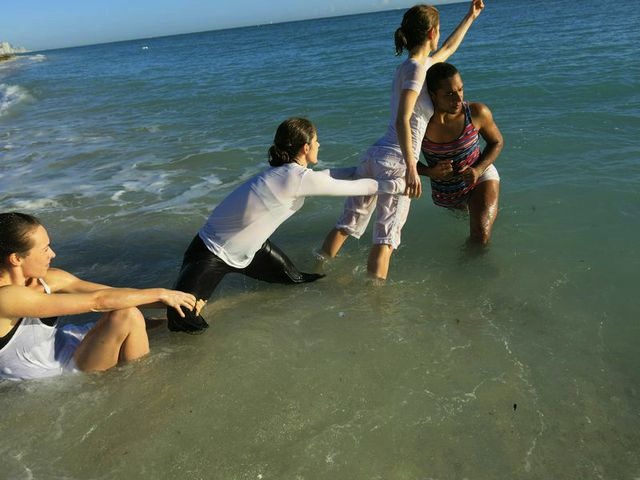 When dancing in tandem with the elements, anything can happen, which is part of the beauty of  The National Water Dance Project’s site-specific performance on Saturday, taking place on the sand and on the edge of the water in North Beach.

“The sand, the water, affects the way the body moves,” says Miami choreographer Dale Andree, whose National Water Dance Project last April at the Deering Estate included 26 states with more than 80 simultaneous water dance projects that were meant to draw attention to water issues across the United States, including sea-level rise in Florida.

Saturday’s event is “completely local,” says Andree, who adds that she’ll be doing another national event in 2016. “I didn’t want to lose the momentum, so I was looking to find a way to do something locally.”

She found the perfect piggyback with the MDC Live presentation of The Nile Project — musicians from Egypt, Sudan, Ethiopia, and other Nile River Basin lands, who sing songs about the world’s longest river and the people it sustains. Andree will present her own choreography along with works by Michelle Grant-Murray, director/coordinator of dance at Miami Dade College/Kendall Campus, whose Olujimi Dance Theatre will perform. Also performing will be Momentum Dance Company, led by MDC Dance Faculty member Delma Iles, Momentum’s artistic director and founder. The program is produced by Miami Dance Futures and will feature students from New World School of the Arts and Miami Dade College’s Jubilation Dance Ensemble.

“Presenting the works on Miami Beach is really about bringing awareness and attention to the critical issue of sea level rise,” says Andree. “The seas are rising and Miami Beach is one of three locations globally that is going to be most affected.”

The choreographer’s dance piece, which she’ll present Saturday, began on the beach and it will have its premier on the beach. “I had the dancers improvise structures and I videotaped the work that they did in those improvs and then I started pulling material from it,” she explains about the process. “Whenever you’re improvising, you are influenced by the surroundings and certainly with sand there’s so much texture and weight that you’re working against — there’s effort that’s created just by moving in the sand.”

The finished product reflects the profound influence the environment had on the structure of the dance. “Although the piece is choreographed, it was very much choreographed to their response — to the sand, to the way it held them, to what they saw around them, to the buildings as well as the organic aspect of it, so there is something really primal.”

Her piece, performed by four dancers, will create a statement, whether evident or not, about the lasting effects of humans’ imprint on the environment. “I think these terms can sometimes get lost in perspective and sometimes people think of it not being important, but in fact you see it immediately when you walk on the beach — you leave an imprint and that’s what we are dealing with — the imprint of our existence and everything else against the rising tide.”

Momentum Dance Company’s work takes place on the edge of the surf and because of the variables involved, the dance will take on a form that will be truly based in the moment. “Depending on how rough the water is on that day,” says Andree, “the waves coming in might knock them off balance, but that’s part of the beauty because the interaction with the surf itself is what creates the dance.”

Music will be minimal — percussion by Sean Dibble and stand-up bass played by Matthew Coogan — so that the surf and sand creates a backdrop of natural sound.

“We’re going to be talking to the audience afterwards on a one-to-one basis about some of these issues, but I think that what we’re trying to carry with us is the absolutely joy of the environment we live in and to recognize it for what it is. And while each person will respond differently, the sustaining message will be that we can’t just enjoy this beautiful surf and sand, then walk away from it. We have to look at it more closely and figure out how we can sustain it.”

The National Water Dance Project will perform directly behind the North Beach Bandshell, 7275 Collins Ave., Miami Beach, in the sand and water beginning at 5:00 p.m. on Saturday — rain or shine-and is free and open to the public. The Nile Project will be performing at the at 8:00 p.m. in the bandshell; admission is $25, $15 students; mdclivearts.org/events/the-nile-project/