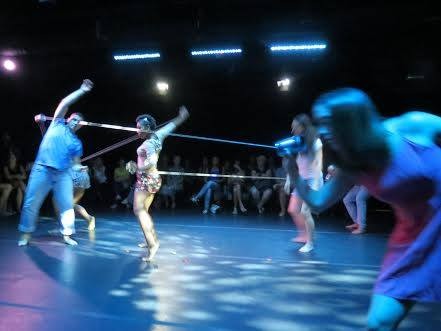 With a background in theater, classical ballet, and modern dance, Miami performer and choreographer Sandra Portal-Andreu has appeared all over the Miami performance scene in the past 15 years. Most recently, she presented choreographic work at the Miami-Dade public library, the Arsht Center’s City Theater Summer Shorts Festival, and the Dance Now! North Beach bandshell concert.

She also teaches movement for acting at New World School of the Arts, and has worked with local performance artists such as Octavio Campos, the Miami City Ballet, and the Florida Grand Opera.

Recently she was selected as a guest choreographer for the Fuzion Dance Artists in Sarasota, where her newest project, TMI (too much information), was first shown in its embryonic form. With the help of some cultural grant funding, she has since imported TMI to Miami, brought in some additional local performers, and developed a full-length version of the project. This week on April 24 and 25, she presents the final product at the RIFT Blackbox Theater in Wynwood, a performance space run by fellow creatives Pioneer Winter and Jared Sharon. Here’s what Portal-Andreu had to say about dance, technology addiction, and the ideas behind TMI.

Artburst: You have a diverse performance background. How do you describe your choreographic work?

Portal-Andreu: I have a very broad background because not only was I trained in classical ballet, but I have a theater background as well. When I was beginning to teach, I was just focused on the classic dance technique. And then little by little, I started realizing, I do have these two worlds that I could blend together. And in the last couple of years, I’ve been integrating theater more and more by using text, or even singing.

TMI has pushed me to even more integration of text and movement. There are moments of testimonials that the performers have shared with me, but in general the work has a lot of dialogue that I’ve written myself.

You’re calling it a multi-disciplinary performance. Does the term “dance” feel too limiting?

I think “dance” would be very limiting because there is theater, there’s a lot of sound composition, and we have film in there as well as animation, which is projected. It is sort of a dance concert, but dance with XYZ. It’s not just one singular voice right now. There are a lot of different genres involved. And that’s been, I think for me, the most challenging.

Who or what has influenced you the most, creatively-speaking?

I tend not to over-fanaticize about one particular person or thing. …The work that I do or the vocabulary that I have developed over the years has really been influenced by all the teachers that I’ve had. And maybe it’s not one particular style but just a moment.

For a semester, I had Suzanne Farrell as one of my ballet teachers at FSU. And the way that she would phrase combinations at the barre, or in the center, is something that blew me away. That’s the Balanchine style of mixing 3’s and 5’s and 2’s, and then all of a sudden, you’re like, what is going on! She had an interesting way of using phrases of movement in ballet.

To this day, I always try to put a little bit of that into my work. Because it was something that I just enjoyed so much as a dancer. And I studied with Gerry Houlihan at FSU as well. I always loved the way that she seemed to float. Everything floated in her class. And so it was very organic to me, the movement that she would create. So when I try to create movement, I always feel like, well, does this make sense? Does the body really want me to go this way or does it feel more natural this way?

Theater-wise, I studied with Thomas Richards in Pontedera, Italy. When I started doing a little bit of the Grotowsky work with him, it kind of blew my mind because he would see things through a theater lens, and would deconstruct from there, asking all these questions the way a psychologist digs in.

What can you tell us about TMI?

TMI came about because, well, my father is a computer engineer. And I grew up literally with computers all over my house. You still go to my house and my dad has maybe four laptops! He has old computers that he tries to refurbish, you name it, cords, drives, whatever you want, the guy has it. So I’ve always been immersed in that world.

I remember having classes with my students, and talking to them about beepers. And the fact that we used to remember our friends’ phone numbers or keep a little address book in our purse. And they looked at me like I was some ancient person.

It’s hard for these younger generations to even realize how things were even maybe five years before they were born. One day I just started thinking, wouldn’t it be interesting to do a piece about technology and how it changes our forms of communication? How now everything is a hashtag or an acronym. People are cutting phrases off, like “adorbs.” The English language is changing.

What is your position on these massive changes brought on by technology?

I have been really interested in the idea of communication, and having technology injected into it, and how it has changed. There’s less of the personal one-to-one thing. You see people at dinner with their phones. And it happens in my house. … I’m not even immune to it. My husband jokes around and says I think TMI is more of a testimonial of your addiction than anything else!

I feel that somehow everybody will be like, I totally do that, I’m guilty! Which is not a bad thing. It’s just shedding light on what’s going on today.