Through the Lens, a Look at Dance and Life in ‘Havana Habibi’ 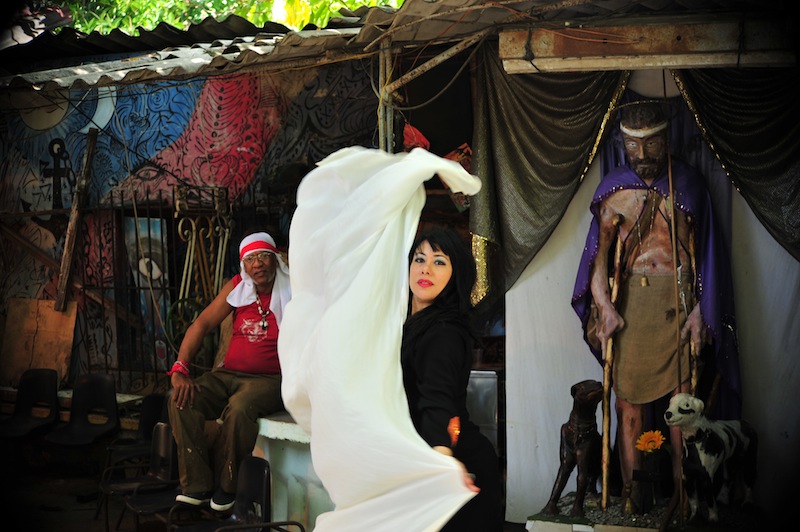 This Thursday, after 13 years of incubation, Miami dancer and filmmaker Tiffany “Hanan” Madera’s documentary Havana Habibi will debut on the big screen. A collaboration between Madera and Brooklyn-based director Joshua Bee Alafia, Havana Habibi is an intimate portrait of a group of women coming of age through dance and struggling to navigate a charged political and cultural divide.

Like many others of her generation, Madera, 43, is the Miami-born child of parents who left Cuba during the revolution. She first visited the island with her family in 1980, when her parents were allowed to return for the first time. But for most of her life, Madera knew Cuba largely from afar, as the source of her family’s painful memories, exile and disappointment.

In 2003 she travelled to Cuba with Miami Light Project for an artistic exchange. By now an established belly dance performer and teacher, she was returning not only to trade artistic ideas, but to mend personal and familial wounds. While in Havana, she encountered a group of young men and women studying Arabic, Indian and North African dance and music. She taught an impromptu belly dance class, and the idea for Havana Habibi — Arabic for Havana My Sweetheart — was born.

Between 2003 and 2007 Madera returned to Havana multiple times with Alafia. “I could feel early on that something amazing was happening,” she says. “Something in me was moving and changing and it was so radical.” She continued to teach belly dance to the women she met. They eventually formed a belly dance company, Grupo Aisha al Hanan, largely based on the techniques they had learned from Madera.

Madera also developed close relationships with members of her family who had stayed in Cuba, from whom she had been separated for most of her life. Alafia captured much of this on camera.

Havana Habibi is raw, at times roughly hewn. “It happened organically, out of sequence and imperfectly,” Madera says. “It’s a real-life document of a phenomenon that was unfolding.” The camera catches unscripted moments of vulnerability, beauty and frustration. While the film documents how Madera and her students sometimes struggled to understand each others’ cultural contexts, she felt that all of them could relate deeply as women.

“We were able to share how, in their culture and in their context, they are silenced, and how in my life and in my context I’ve been silenced,” Madera says. The Cuban women, and Madera herself, visibly transform on camera. In some of the early scenes, we see the students struggling with basic belly dancing movements. Later, as they gain confidence and connect with their own individual forms of beauty, they soften and become more empowered. We also see the passage of time as each of the women ages.

As she was working on the film, Madera’s imported costumes were held up for weeks in Cuban government offices. She met with strong disapproval from her family in Miami and misunderstandings with the Cuban women. In 2007, frustrated by seemingly endless obstacles, she announced to the women of Aisha al Hanan that she would not return. But Alafia continued filming without her. By 2014, Madera felt she needed to complete the project she had initiated over 10 years before. She flew to Havana once again to reunite with the women and finish the film.

In her time away from the film, Madera developed a workshop called “Dancing My Mother’s Body,” a methodology for personal exploration through dance that came from her work with the Cuban dancers. Havana Habibi closes with Madera visiting the dance school set up by Gretel Sanchez Llabre, one of her former students, and teaching a “Dancing My Mother’s Body” workshop to Llabre’s company.

In the film, Madera also reveals a traumatic incident that led her to seek healing through dance.

“Part of what I’m trying to offer with the film, more than just belly dancing, is to look at the way that women carry violence in their genes, in their blood, in their bodies, and how dancing can become a very powerful way to set it free and to transform it,” Madera says. The film is dedicated to her mother.

Havana Habibi is shaped by the mature awareness that comes from looking back. As narrator, Madera’s commentary reveals emotional undercurrents that went unspoken at the time. Bringing the film to a close was not easy for her.

“Where do we end the story?” she says. “Trauma is something non-linear and it’s not something that you can anchor in time and space.”

But as it is, Havana Habibi feels complete. Through the film we see pieces of a larger story—not just Madera’s personal history but a shifting political situation. In Miami, younger Cuban-Americans are often caught between strong cultural or family ties to the island and immovable political positions, a division that is slowly relaxing.

Personal stories like Havana Habibi help to humanize that process.

This article also appears in the Miami Herald.