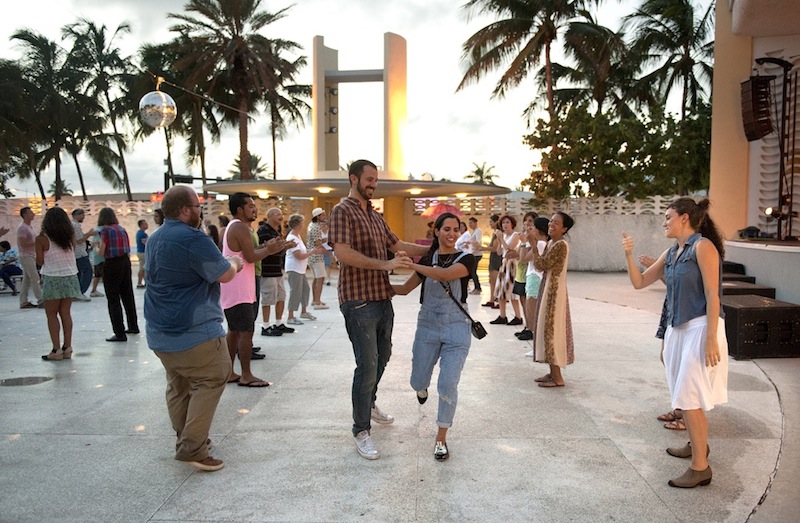 It’s perhaps the most exotic dance music to hit Miami in recent memory: contradance — it’s Americana, the real thing, a far more sophisticated version of the square-dancing you may remember from gym dances in elementary school. A band called Cornbread and just as tasty is in the house each Thursday night in July as the Rhythm Foundation’s Dance Thursday series continues at the North Beach Bandshell.

If ever there was music that invited community, this is it. With all that “do-si-do” and “swing your partner,” couples keep reforming. As the evening moves on, everybody ends up dancing with everybody else, even if for a few moments.

No worries, though, if maybe all this is well, foreign. Anita Mason, a member of Cornbread, the gal who is shouting out those “do-si-dos,” goes out of her way to make it uncomplicated fun. It wasn’t so long ago that she and her husband Pat, another of Cornbread’s musicians, were just learning about all this themselves. It was during a Florida Folk Festival and the newbies were surprised by the warmth of the welcome they received. “We want to carry the good vibes forward.”

And so they rolled on a Thursday at the Bandshell as young and old and folks heralding from all over creation came together. “All this was especially moving after the events of the last weeks,” Anita says.

If would-be-dancers feel that they’d like a lesson, that is in the cards as well. Simply arrive an hour early, at 7:00 p.m. Both Anita and Pat are professional dance instructors.

On July 21, Cornbread’s evening at the Bandshell will have an Irish flavor with jigs and reels from the Emerald Isle. Indeed, it was during a bicycle trip around Ireland that the couple fell head over heels with the contradance they saw everywhere.

On July 28, Cornbread will end its summer-time series with a compilation of those reels that were their audience’s favorites (the musician’s too) throughout July.

Still, while these distinctions in style are real, there are subtle. All contradance share the same roots in the community dancing of Ireland and Scotland and Northern France. Those rhythms took root in the American South via the Scotch-Irish and evolved into the genre known as Blue Grass.

It first occurred to Miami’s Rhythm Foundation’s Laura Quinlan to initiate this Contradance program while vacationing in North Carolina. “Country dance is a huge scene there,” she says. “Everybody gets out on the floor: college kids, families, elderly gents with cowboy boots, ladies with big hair.

“So many Miamians vacation in the Carolinas, and these dances are often becoming a highlight of their time away. People here began asking the Rhythm Foundation if we could bring some of the dances home.”

And so the Rhythm Foundation, which has brought an extraordinary number of musical genres to its Thursday night dance concert series — salsa, tango, swing, zydeco, compass, souka et al — adds still another.

Stay tuned: The Bandshell and its Thursday dance concerts return to its regular every second Thursday slot on Sept. 8, with a blast of Cuban tunes, old and new, from composer and bandleader Ivan “Melon” Lewis and his Cuban Swing Express.

And for those who want to keep on contradancing, Cornbread can be seen all fall and winter on Sunday afternoons at the Barnacle State Park in Coconut Grove. Contradance at the North Beach Bandshell, 7275 Collins Ave., Miami Beach; Thursdays through, 8:00 – 10:00 p.m., with dance class at 7 p.m. Admission is free with a $5 suggested donation.