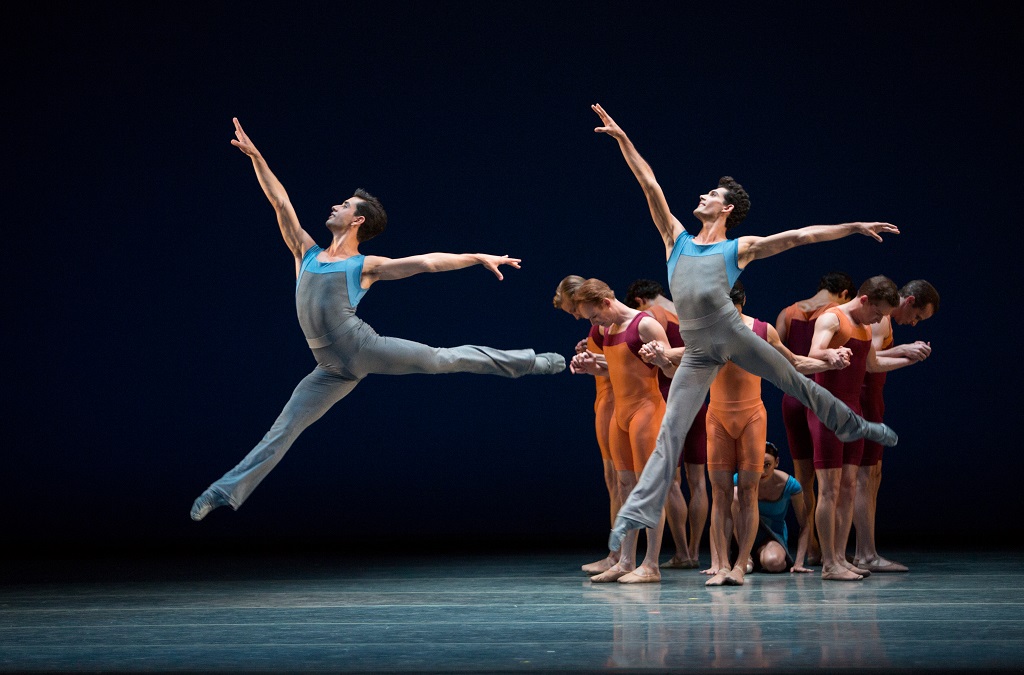 Miami City Ballet is in league with Russians – in a good way — and this promises to make a selection of dances look great again. The company’s final program this season brings back Apollo and La Valse, by St. Petersburg-bred and New York-consecrated George Balanchine, in conjunction with Alexei Ratmansky’s Concerto DSCH. Though a company first, the latter work to a Dmitri Shostakovich piano concerto helped push its creator—akin to Balanchine in origin and trajectory—above other contemporary choreographers when it premiered at New York City Ballet a decade ago.

As both guardians of classical values and resourceful innovators, Balanchine and Ratmansky reference their artistic roots yet advance ballet in unprecedented directions. Thus pedigreed and bold, the works on the MCB bill will take us from Olympian majesty to worldly clamor and on the way whirl through a ballroom full of mystery and glamour. And that kind of variety gratifies dancers as much as audiences.

“I’ve already grown a lot in this company through exposure to many choreographers, but the current program has taken me much further,” says Samantha Hope Galler, delighted to mark her promotion to soloist dancing in La Valse and Concerto DSCH. On standby for Apollo, having learned the part of Calliope, Muse of epic poetry, she believes that only a heavy-hitter like Ratmansky could take a rightful place in this superior lineup.

A Ballets Russes springboard to the choreographer’s fame from 1928, Apollo initiated Balanchine’s lifelong relationship with the music of his countryman Igor Stravinsky. Here the title’s god of light communes with three Muses, their angles and paces indeed describing a Parnassian geometry with cerebral beauty. This contrasts with the flush of passions in La Valse, which spins to waltzes by Maurice Ravel as a spellbound woman yields to a fatal attraction. In the mix, Ratmansky’s ballet boasts its own canny dance design and balance of tones, proving that classicism can still reveal a fresh face.

“His work is unique within tradition,” Galler points out, admiring how Ratmansky brings together familiar steps in astonishing ways. Yet the choreographic bounty becomes challenging, especially when it pours out with the force and speed of a torrent.

“I’ve asked myself how he fits all that in,” says Galler. “There are lots of jumps, and the movement really covers the stage. It’s quite brisk! At first I feared I couldn’t get half the steps, but Alexei puts you into a mindset that draws out your best—and does so in a soft-spoken, nurturing way.”

That successful approach to setting a dance, however, was held up last September when South Beach came under an evacuation order right after Ratmansky’s arrival at MCB studios. But Hurricane Irma would not thwart creative hurricane Alexei, who came back with characteristic focus to pull everyone in.

“He sees everything and touches on every detail,” marvels Galler.

During a Good Friday rehearsal at MCB, in the capable hands of the company’s ballet masters, the dancers forged on in the three movements of Concerto DSCH, whose title features a musical cryptogram, the sequence of notes Shostakovich sometimes used to represent his name. In giddy piano runs, the first and third sections elicited whirlwinds of action from the group, with a calmer eye of lyricism for a man and woman in between. Friendly sauntering and good humor bubbled up amid the hubbub.

“I was drawn by my admiration of the music, which is very optimistic,” says Ratmansky about the 1957 score. “It was composed after Stalinism, when there were hopes for a better life. That was my parents’ time. Concerto reflects the era—safer, warmer. I wanted to make the dancing happy, young, with a sort of physical perfection.”

It’s one more instance in Ratmansky’s career where the choreographer has aimed to “find the humanity in the dance. There’s pure joy here.”

About performing in a prominent trio (alongside Nathalia Arja and Kleber Rebello) interwoven throughout the piece, Renan Cerdeiro says, “We all have little solos. There are jumps and double tours. It’s very playful, and we’re always coming into each other’s space as the ballerina’s trying to decide who she’ll go with.”

The principal dancer underscores his pleasure in this all-around sharing of the limelight, an element Galler also finds ingenious. “Everyone on stage is always involved,” says Cerdeiro. “And sometimes the steps of the corps are just as hard as those of the principals.”

Not to imply the lead parts are anything but luscious.

In the central pas de deux partnering Tricia Albertson—with whom he’s developed a firm onstage relationship this season—Rainer Krenstetter has found privilege. “Yes, there are many challenging steps,” he says, “but coming from Alexei that’s a luxury. While you’re dancing you simply forget it’s difficult. His dynamics are always very interesting—it’s not just about speed. Sometimes you have to stretch further or hold a pose in a way that makes movement before and after stand out better. It’s so beautiful!”

Krenstetter would next love to do one of the choreographer’s full-length works. And he gets no argument from fellow principal Cerdeiro, who says, “Being with Alexei is always a learning process. You come to grasp not just what he’s doing but why.”

Despite the hurricanes, it’s easy to forecast Ratmansky will return— having enriched MCB’s repertory with Symphonic Dances and The Fairy’s Kiss in seasons before Concerto DSCH.

“I admire the company’s professional devotion,” says the Russian star.  “I come here to an environment that I find not just comfortable but inspiring.”