The Making of the Cuban Belly Dance Film ‘Havana Habibi’ 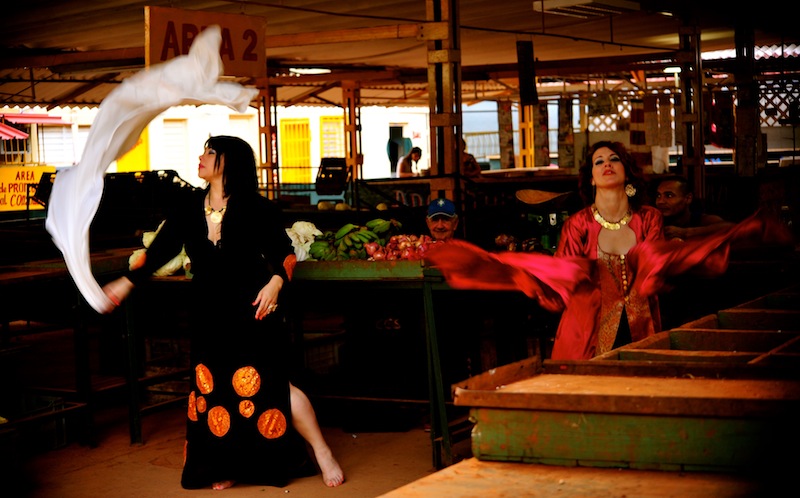 Havana Habibi, a film by local dancer Tiffany “Hanan” Madera, has been in the works for more than a decade. Havana Habibi documents Madera’s experience teaching belly dance in Cuba to a small group of women from the University of Havana’s History Department. This artistic exchange led to the formation of Cuba’s first Arabic dance company, Grupo Aisha Al-Hanan, and transformed both Hanan and her students in the process.

While the film remains under wraps until January 2016, Madera will be offering dance workshops and lectures this fall, including some preview clips of Havana Habibi. We spoke with her recently about the film as it nears completion, and the self-discovery sparked by her experience in making it.

You’ve been working on this film for 12 years. How did this project get started?

Hanan: I didn’t set out to make a film, it happened organically. I went to Cuba in 2003 with the Miami Light Project as part of an artist exchange. On that trip, I met a musician named Pedro Bandera. He told me about some of his classmates from the university who wanted to learn belly dancing. So I taught some impromptu belly dance classes on that trip, and then I came back a month later specifically to work with these young women from the university. And during that trip, it felt like something more was happening. The film grew out of wanting to capture the synchronicity and symbiosis that was happening between these students and myself.

Can you say more about what was happening for you and the other dancers?

In 2003, I had already been dancing professionally for quite some time, but in Cuba, it took on a special meaning because that is the country of my parents and my family and my ancestors. It felt like I was connecting to the land at a cellular level that had a deeper and broader context for the movements coming through my body.

Belly dancing speaks to every woman in a different way, but in a profound way. I saw, in these young college-age women, a coming of age. They were meeting womanhood with this dance that is ancient, which speaks about womanhood and cycles of gender formation and maturity. And they were learning to hear music from another part of the world, which of course was being translated by someone from yet another part of the world.

It was a very strong bond that we had. Havana Habibi, the film, was just a way to capture a component of it.

Did you bring in a crew to shoot the film?

The film is very raw. I worked with Joshua Bee Alaffia, from Beeloved Creations. He’s a Brooklyn-based professional filmmaker who specializes in African diasporic films. But there was no producer on set. There was no one brushing my hair or wiping the sweat off me. It’s so real that it actually has shocked me in the editing process. It’s been very interesting to watch my life on tape for 12 years, to see myself mature and transform physically and emotionally. From 2003 to 2009, we were shooting, and there was a little break, and then we went back. So the finished cut of the film talks about the entire trajectory.

When is Havana Habibi going to be screened?

We’re launching the film in January.

What I’m doing now is a series of Havana Habibi events.

I’m teaching the first in a series of Havana Habibi master classes. These are belly dance workshops inspired by the film. …. I’ll be giving a literary breakfast salon at the Betsy Hotel where I’m currently a writer-in-residence. I’m going to be reading from my dance memoir, Dancing My Mother’s Body. It’s a writing project that I’m working on at the Betsy, but it’s also a dance project. And at the end of Havana Habibi, in a segment I’m going to show at the breakfast salon, I did a Dancing My Mother’s Body workshop in Havana with the women. The book project, the dance project, and Havana Habibi have all been about my mother and her exile experience, and how that exile experience has marked and shaped my own body.

So this is a deeply personal project for you.

It’s become autobiographical in a way that I really didn’t expect. I didn’t set out to do it. It’s been a confluence of intellectual curiosity and spiritual transformation and aesthetic growth. But it’s very much driven from my heart and my own feelings of love and desire for healing and transformation of certain wounds shared by the women in my family.

To stay updated on the release of Havana Habibi, visit www.mede-arts.org or like the film’s Facebook page at www.facebook.com/havanahabibi.