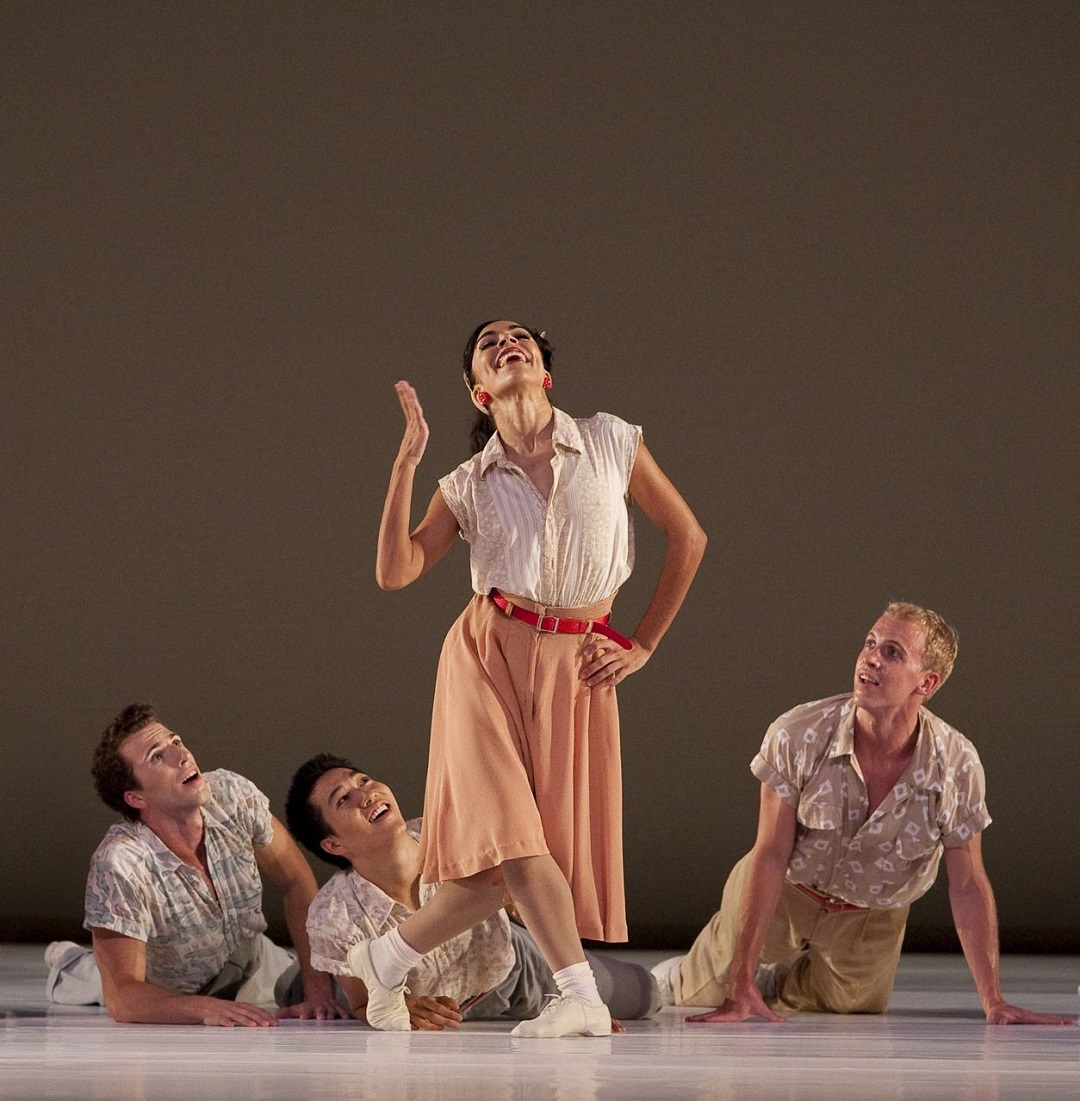 Choreographer Paul Taylor, a colossus of modern dance eagerly embraced by classical companies, died this August at 88. Now Miami City Ballet will resurrect his expansive spirit in a work that lends its name to the season’s first program. Company B, to nine quicken-the-heart songs by the Andrews Sisters, presents romance—whether frisky or wistful—in the shaded manner of this prodigious creator.

For MCB artistic director Lourdes Lopez, Company B brings the kind of art that speaks to audiences as well as performers. “Taylor is one of our most musical choreographers, and this piece just flows in a way that’s perfect for ballet dancers. One would be hard put not to have heard some of the songs here, and the movement, from jitterbug to foxtrot, can connect to today’s rhythms like hip hop.”

Company B premiered at the Houston Ballet in 1991 before being taken up by Taylor’s own ensemble. Although the piece references the World War II era, with vintage clothing and period-tinged encounters illustrating jukebox tunes, the endearing colors of that scrapbook surface seep into timeless experience. Love and loss, the bliss of innocence and the gut-punch of experience—all are portrayed as couples join and separate, individuals dream, and the good old gang cavorts toward the horizon.

Taylor’s palette covers both bright and brooding action. Given his taste for social criticism, a harsh reality here pierces through pretty-picture Americana. A man can quiver or plop down in the middle of a frolic as if riddled by bullets and, upstage in silhouette, a parade of ghostly soldiers marches on while the rest of the cast swings and swoons.

For Jeanette Delgado, who has returned to MCB after a year’s sabbatical in Spain, there can be no better tribute to the late choreographer than this work, which enriched her career and will now inspire a fresh crop of dancers. “The choreography is so potent it makes you feel really alive,” says the principal ballerina.

From the array of emotions in Company B, the program enters a choreographic realm of clever formations and refined bearing with a couple of gems from MCB’s Balanchine trove. Both Concerto Barocco and Tchaikovsky Piano Concerto No. 2 premiered in 1941 on a tour of Latin America by American Ballet Caravan, a forerunner of New York City Ballet. By 1951 Concerto Barocco had changed into plain leotards and tights, a Balanchine signature, the better to show off an exquisite continuum of movement wedded to Bach’s Double Violin Concerto in D Minor. Originally called Ballet Imperial, using fancy costumes and a set, the Tchaikovsky piece acquired its current look—edited, décor-free, and dressed in serene colors—at a NYCB restaging in 1973.

“There are so many layers to Piano Concerto No. 2,” says Delgado, glad to dance the lead in a fitting homecoming. “This is crazy hard technically, but the music is so luscious it pulls you through.”

Delgado is quick to point out that the piece, while evoking the grand ballet style of Imperial Russia, is not just about exclamatory moments. “There’s an intimacy here that can be heart-rending,” she says. “In the second movement’s pas de deux, with so much subtlety, you get to see a side of the bravura ballerina which is unexpected.”

As a tried and proven Balanchine specialist—a pedigree held in high regard as she freelanced in Europe last year—Delgado brings to this ballet the speed and clarity honed throughout 15 years at MCB. And she feels especially moved to be dancing alongside Renato Penteado, who after an equally distinguished career will retire from the company at the end of the season.

“My role in this piece,” contends Penteado, “is more than anything about partnering.” Beyond a couple of showy sequences, a supportive relationship with the ballerina defines the essence of his part—and this feels perfect at this point in his artistic journey.  “I can now dance more by trying to push less,” he explains, knowing smaller details and an assured presence—not just flashy steps—can often make the best impression on stage.

“Success for me involves helping my companion look good,” says Penteado. “But that’s the beauty of this.”

Nina Fernandes, a young Brazilian who debuts with the company in the corps de ballet for the Tchaikovsky concerto, is thrilled to carry on the Balanchine tradition surrounded by such seasoned professionals. Coming from the Houston Ballet, she brings some experience with neoclassicism.  But she emphasizes this new foray has upped her game considerably.

“It’s great how this keeps me focused technically,” says Fernandes. “And I’m also learning a lot about the mental aspects of dancing. At the end of rehearsals I can feel exhausted, but I love it!”

According to artistic director Lopez, the opportunity for performers to explore and grow, in an interesting mix of substance and entertainment, makes for the worthiest of programs. And she’s planned for the season to continue on the high ground as a big, bold company premiere (Brahms/Handel, a Jerome Robbins-Twyla Tharp collaboration) joins the return of notable repertory: Robbins’ Dances at a Gathering, Balanchine’s The Four Temperaments, Justin Peck’s Heatscape, and in spring the groundbreaking production of A Midsummer Night’s Dream.