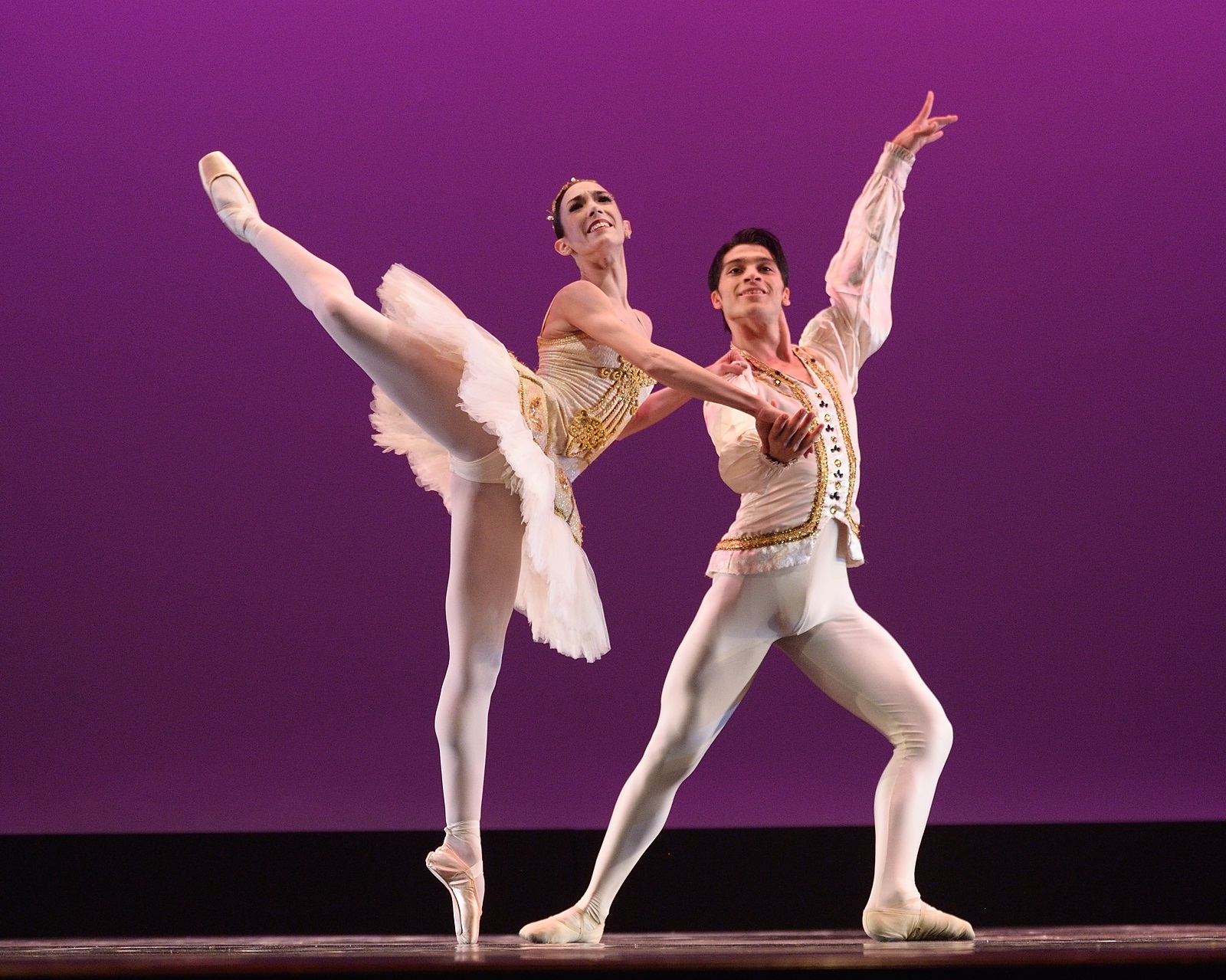 The XXIII International Ballet Festival of Miami’s contemporary program at the Manuel Artime Theater included two works that drew attention to what’s best about this yearly event—for the first time without its founder, Pedro Pablo Peña, who died last March, and under the direction of Eriberto Jiménez, a long-time associate. Miami-Dade’s Arts Ballet Theatre of Florida brought Possession, a world premiere, and Compañía Cuerpo Etéreo, from Mexico, staged the intriguing Eclosión de un Arte (The Hatching of an Art), each piece in different ways expanding our dance horizons. The local company revealed a novel side of itself, and the visitors allowed us to discover ingenuity beyond our borders.

The Mexican offering, with choreography by Brisa Escobedo, managed to be both well-grounded—in technique, imagery, dynamic progressions—and otherworldly. The intertwining of a woman and two bare-chested men, all in white body makeup, legs draped in pale layers, portrayed waiflike beings on a mission to spread an eerie joy. Ranging from forceful lifts to exploratory scurrying, the dancers (Mayra Alarcón, Jesús Garay, and César Zetina) took to the delicate yet keen intonations of the Flower Duet from Léo Delibes’ opera Lakmé.

A second piece by this group, Draft: El Espacio Vacío, choreographed by Escobedo and company director Jaime Sierra, led to internecine struggles for the cast of seven, in relation to a mysterious woman. Despite the domesticity promised by a sofa used to climb and plop on, angst ruled the roost throughout wholeheartedly energetic scrambling.

Haunted by a dark mood and given to excitability, ABTF’s Possession was a segment from company artistic director Vladimir Issaev’s Vertigo, based on the Alfred Hitchcock movie. The female duet harkened to an episode where the lead character Madeleine is spellbound by a painting of her forebear, Carlota Valdés. Here melodrama hit the register of fascinating ambiguity—supernatural phenomenon or twisted psychology?—especially with the exquisitely skilled ballerina Mary Carmen Catoya acting out attraction and trepidation entangled to her legacy, represented by Lusián Hernández as the painted image come to life.

About the challenges of her part, Catoya has commented: “I have to become another, fusing the dramatic to the technical to create the scene with each step.”

Her execution of turn after scintillating turn, as well as frozen arabesques, underscored the theme of compulsion. And such an artistic task bore not just physical but emotional weight. “I can’t deny its demands—maestro Issaev never creates facile movement,” says the ballerina.  “This takes a lot to carry through for the whole dance.”

Other pieces on the program, with varying degrees of success, further showcased both area and foreign performers. Miami Hispanic Ballet, the festival’s producing organization, presented Clash, choreographed by the dancers, Dayron Parra and Dayanis Mondeja, who were fluid and flexible, to aggressive percussion, upholding what the title promised. Grace Arts Florida featured long-time advocate of flamenco experimentation Niurca Márquez in her own choreography for Encuentros, accompanied by agile guitarists José Luis de la Paz and Alberto Puerto. She entered with one shoe off and–though soon fittingly shod—so also exited. Moment to moment she seemed to question or surrender to her dance form’s tropes: in brandishing the voluminous red skirt, say, or breaking out in taconeo.

The most expansive work of the evening came from Italy’s Lyric Dance Theater: Caravaggio: amor vincit omnia, with lengthy sections and varied groupings featuring eight dancers.  The Latin part of the title assures us that “love conquers all,” but the serious intent of the piece—as explained in a program note—to render in dance terms the Italian master’s dramatic painting style and subject matter failed to conquer the piece’s somnolence, especially under the gauze of a sighing score.

Only in its later editions has this festival included a separate contemporary program. Despite some edgier and bigger-cast contributions throughout the years, the event has historically tied its repute to the classical pas de deux, not without glories but frequently over-stocked and sometimes unfussily curated. The more traditional programs on the upcoming weekend galas thus aim for the thrills of athleticism and a grand manner on a well-trod base.  And this comes from different quarters: Compañía Colombiana de Ballet; Birmingham Royal Ballet (England); Ballet Nacional Sodre (Uruguay); Compañía Nacional de Danza (Mexico); Ballet Manila (Philippines); and Corpo di Ballo del Teatro di San Carlo (Italy), among others.  Appealing additions this time out include Miami City Ballet, with Rainer Krenstetter and Emily Bromberg mining Balanchine’s Diamonds, and Dimensions Dance Theatre of Miami.

ABTF’s Catoya extols the value of also contributing to this classical program in a trio from Issaev’s Chipolino. Based on an Italian children’s story, later a Soviet animated film and ballet, the fable conjures up rebellion in a vegetable kingdom. Though light and sweet, as Catoya insists, the work shouldn’t be underestimated.

“This calls for a great deal of expressiveness, a continuous dialog in movement among the three characters. And it’s meaningful in the way they cooperate to liberate their land from oppression,” notes the Venezuelan-born ballerina, pointing to the ballet’s relevance in a world full of political turmoil.

As festival director, facing the future of the festival after Peña, Jiménez pledges to stay on course showing works from both ballet’s great storehouse and its evolving forefront. “I’ve always gotten pleasure from organizing and promoting this event, to spread knowledge about an art so close to my heart,” he says.