The Ever Popular ‘Tango Lovers’ Returns to South Florida 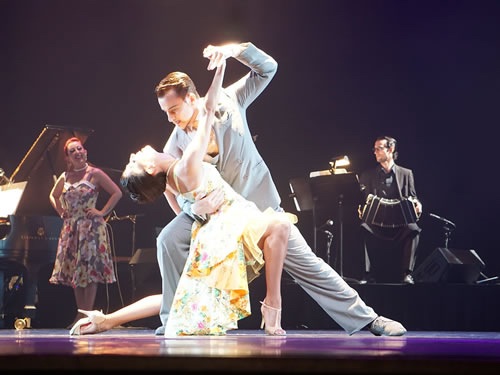 Even people who can’t find Argentina on a map and believe tangos only happen in Paris know La Cumparsita’s iconic four beat opening. Like a bar’s last call, La Cumparsita tells tango dancers the night (or, rather, the morning) is over. Tango aficionados hear those first beats and either make a beeline to a special partner for the night’s last dance or a breakaway to the parking lot before the crowd can come to their senses.

Because it appeals to tango neophytes and long-timers alike, the hit Broadway show “Tango Lovers” celebrates the song in their return to South Florida for two shows on March 30 and 31at the Fillmore Theater and the South Miami-Dade Cultural Arts Center.

Though most of us identify Argentine Tango with – well – Argentina, the composition of La Cumparsita tells a different story. “The tango – La Cumparsita – was composed by an Uruguayan medical student 100 years ago,” explained “Tango Lovers”principal singer and show producer, Alfredo Lerida. When asked about the motivation behind making this song the show’s centerpiece, he replied, “The tango genre has evolved throughout its history up to our present day, but the focus of ‘Tango Lovers’is on the essence of tango.” La Cumparsita is the show’s focus because it is the one constant of that tradition.

The show begins “with a potpourri of tangos like el Choclo, Loca de Angel Villoldo and many others to introduce the audience to tango’s Golden Years,” says Lerida. “It then advances until we arrive to today where we present them with the most recent compositions by our own gifted young musicians.”

This year marks the second tour for Carlos Gardel Prize winner Lautaro Greco, who rejoins the show as principal bandoneon player. Describing the qualities his playing brings to the show, executive director Pierina Asti-Schultz commented: “Lautaro brings a fresh perspective getting closer to younger generations while bringing the best of tango to our classical and traditional audiences.”

Where tango music plays people dance. But in the course of a hundred years the dance, like the southern cone culture, has undergone dramatic changes. As Julliard grad and “Tango Lovers”principal dancer Tere Sanchez Terraf described: “The styles of music, the dance and costume evolved over time. This happened both in the social dance and the more theatrical tango shows danced on stage.” In “Tango Lovers,” the audience travels through time watching this process. “Beginning with the ‘50s and the traditional tango salon ‘Tango Lovers’transports the audience to the present and exposes them to Piazzolla and the most recent musical innovations and tango fusions,” where traditional tango mixes with jazz, Argentine folkloric dance and ballet.

Terraf is herself Argentine, but her first introduction to tango occurred like it does for a lot of Argentine ex-pats – far from the southern cone. “While I was in New York studying, I met some tango dancers who took me to a milonga — a place where people dance tango, something like a disco for tango.” From that first exposure Terraf caught the bug and pursued study of the dance on breaks from school when she was back in Argentina. She’s quick to point out the irony. “I may have studied tango when I went back to Argentina, but I fell in love with it in New York!”