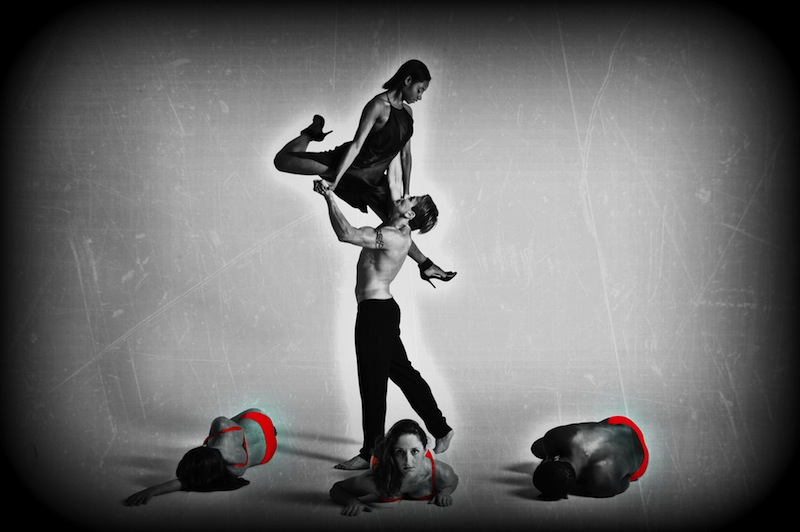 Beneath the wrought iron roses on the arch of the Colony Theater’s stage, two rows of dancers lay is if meditating, heads toward the audience. Glued in a tight embrace, Janine Maffucci and Luis Vivas step among them, Vivas kicking his foot in an occasional gancho, a tango step where the foot flicks into the flash of space that opens between a dancer’s legs. As the bandoneon solo from Piazzola’s La fugata screeches out a scale, their steps lengthen then freeze in a lunge as Maffucci’s left leg wraps around Vivas’ waist and Vivas draws her right arm behind his head.

Twelve rows back, in a blue-and-white striped herringbone cap, Miami Contemporary Dance Company (MCDC) artistic director and choreographer, Ray Sullivan, watches, intently directing Vivas to deepen the lunge and to hold the pose for the violins to join back in. In that moment he speaks with the precision of the foreman of a construction site implementing an architect’s design as he readies his dancers to debut the show, Tango Undressed, for Miami audiences for the first time in five years at the end of May.

This show first premiered in 2004, proving to be a relief from the shows put on by most touring tango companies that limit the dance to endless rehearsals of Disney-like romance and fuzzy notions of porteño machismo.

With this in mind, the first question to Sullivan during a break from rehearsals at Segafredo café on Lincoln Road was why, after such a hiatus, he had now decided to restage Tango Undressed.

He explained that the impulse grew out of a community outreach project with youth in Overtown last fall. “I wanted both to teach the MCDC contemporary dancers and some of the young people in Overtown some basic tango to prepare the dancers for this piece and to broaden the horizons of the kids.”

Sullivan insisted that another reason were the dancers themselves, who herald from all over the world. He felt the 12 dancers now forming the troupe (all on full-time contracts) presented him with an opportunity to push the envelope with the show’s themes, given their diversity and strong dance skills.

The show is made up of 16 short dance stories linked to the period when Sullivan danced with Argentina’s El Ballet Contemporáneo del Teatro San Martín for five years in the early 1990s. The choreographies are inspired by the people he met in the dance events, or milongas, during that time.

The show pushes back against the narratives and the motifs that made tango marketable to a worldwide audience. “The tango shows in Buenos Aires have repackaged tango to give tourists what they want,” Sullivan observes. “I feel very strongly that tango is a dance that should always evolve. Those narratives and motifs should be broken apart and explored.”

Speaking with infectious energy, the choreographer explained that the original idea was to get past the big hairdos and sequins typical of tourist-style tango shows and tell stories other than the folkloric bar scenes that end with someone breaking a bottle and brawling over a girl.

“I went to the milongas of Argentina for so many years, I needed to stare all the cliches right in the face,” he explains. “For instance, in the show there is a duet for two men. It is based on my memory of two men in a milonga in Buenos Aires who were very obviously in love with one another though they were both with women. When one would get up to dance, the other would sit in his chair and appreciate him. Neither of them thought anyone noticed, but I did.”

Sullivan understands that when people see the show they will of course fixate on those moments when guys rip their clothes off and the women pour water on themselves.

However for Sullivan, each of these 16 pieces carries forward a unified theme and for him this is what Tango Undressed is all about — undressing the clichés that imprison bodies, sexualities, and spirits.