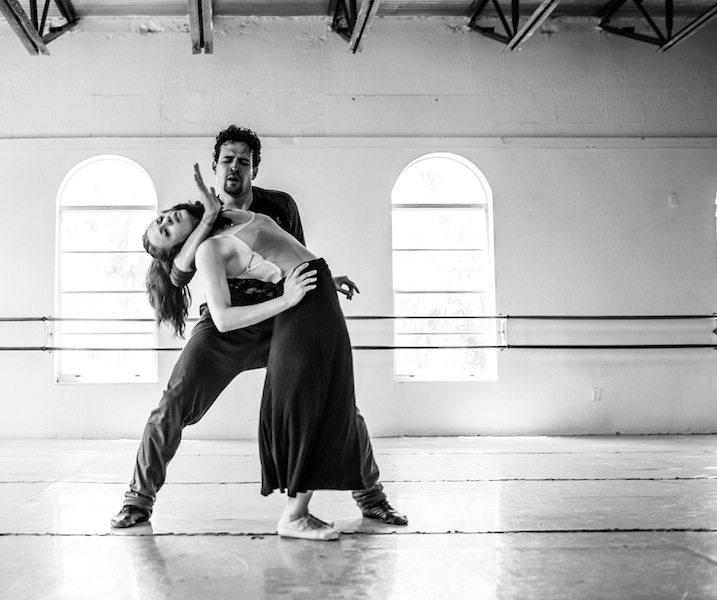 With every great new love, the beginning is a crucible of extremes – will it endure for decades or permanently scar?The program for Dimensions Dance Theater of Miami’sJuly 8show, “Fiebre: A Night of Summer Ballet,” captures the uncertainties that electrify the air when a great passion first takes root.

On a rainy Wednesday the company rehearsed one of the summer pieces, C’est la vie – a new work from Boston-based choreographer Kevin Jenkins, and the company’s 12th premiere in its first year.

Flashing a rose tattoo on her back, dancer Chloe Freytag pivots, and rests her hand on the chests of dancers Stephan Fons and Eduardo Iglesias, then kicks, first left then right, as Marie Laforet croons the 1966hit “Manchester et Liverpool”– it’s a quirky mix of Paris bistro meets Austin Powers. The sequence ends with a leap and a lift, her hands on their shoulders, framed above them like a ‘50s starlet.

Boston-based choreographer Jenkins claps as they finish. “What a game-changer,” he congratulates the dancers. Jenkins’ choreography shows the influence of his training in classical, jazz and hip-hop. “The idea behind C’est la vie is a night club setting where everyone feigns being super cool, but beneath [they] are borderline paranoid, afraid that someone else will upstage them.”

Next, founding company directors Kronenberg and Guerra warm up for a run of their piece, Transparente. “This piece … is more theatrical and the opposite in mood,” says Kronenberg. “The curtain opens and you know there’s a problem with the couple.You have this sense that here are two people at the moment when they say, ‘either we face the problem and move on or else…’ The choreographer – Ronald Sovkovik – is very selective about the companies he allows dance it and right now DDTM is the only company in the world with the rights.”

The couple takes position at the center, seated on two black chairs with hands on knees, faces stony, eyes lowered. The piece opens to Spanish guitar and the lyrics of “Malmequer,”sung by the popular Portuguese fado singer Mariza.

Within moments the music shifts to a synthesized machine beat and at once Guerra is up, with body-length extensions and reaching turns, ending with arms outstretched at Kronenberg’s feet. Then the fado returns. Guerra places his cheek on Kronenberg’s forearm and the two pivot and embrace in unison, Guerra assisting her in lifts until she halts him. Preparing for a great leap and lift, Kronenberg runs at him. Guerra deliberately hesitates as if he might let her fall, then catches her liquidly and secures her against his chest and shoulder.

It’s hard to catch a breath as the two perform.

“This choreography doesn’t work as well with young couples,” explains Kronenberg. “It just doesn’t fit them. Sovkovik insists that only a mature couple should dance it.”

For Guerra, performing this piece with his wife of over a decade, the timing is right. “It’s coincidental that the chance comes now to dance this, after 11 years of marriage and 15 years of working together. We might not have been ready to immerse ourselves in its emotional intensity at an earlier stage in our lives.”

Then comes the rehearsal for “Fiebre,”the title piece for the summer show and the work of Venezuelan choreographer Vicente Nebrada. “Fiebre” first premiered in San Francisco in 1995 and featured Cuban singer La Lupe. With the help of choreographers Yanis Pikeiris – who danced with Nebrada – and Nebrada’s long-time collaborator Zane Wilson, DDTM intends to revive the dance with its original format and energy.

“The partnering work in ‘Fiebre’ is incredible because the guy supports a lot of lifts,” says Kronenberg. “One reason we chose this ballet is to draw in a new audience who may not be interested in seeing ballet but they love La Lupe. Alain Garcia and his Latin Power band will join us live for our performance.”

Kronenberg reflects on the challenges DDTM faces as a new company in its first year. “The love of what we do gets us through it — we don’t feel we have a choice. I’ve thought about letting it go but there is something inside me that says, no! Some people tell us this is a fabulous idea, some people have said we may not be rational, and a couple others think it downright suicidal.”

Financially it’s a tough road, she says, with long days and nights. “We really have to go out there and sell our vision and so we have to be invested in it 120 percent.”