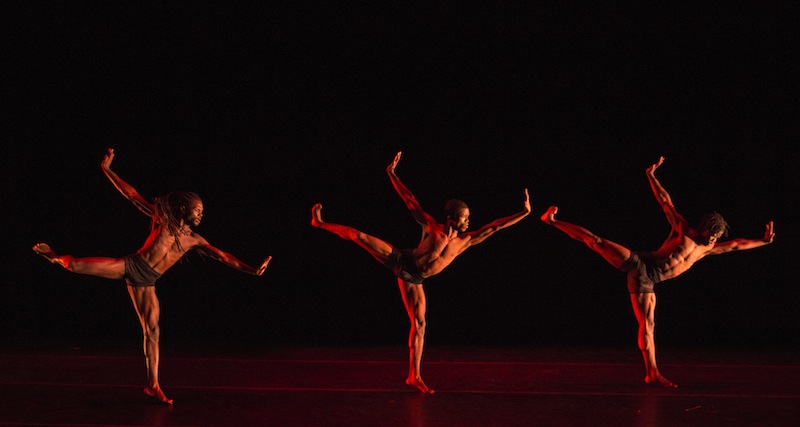 Haitian dance company Ayikodans may be based in Port-au-Prince, but the group is one of Miami’s treasures. Endangered by the 2010 earthquake, the company has since been sustained through a partnership with Miami’s Adrienne Arsht Center for the Performing Arts. In 2013, a three-year funding effort by the Arsht Center allowed the struggling group to build a new home studio outside Port-Au-Prince.

Ayikodans returns to perform in Miami annually, one of the highlights of the dance season each year. For their 2016 appearance, the company debuted a commission for the Arsht Center’s 10th anniversary: M’angaje (Kreyol for “I am committed”). The title of the piece nods to the artistic alliance between the Arsht and Ayikodans, but more significantly it represents director Jeanguy Saintus’s very personal commitment to his own cultural heritage and spiritual practices.

As written in the evening’s program, M’angaje describes “the necessity or the duty to return to the roots, delving into one’s inner soul, and asking the spirits safe passage through a great distress.” Where references to Haitian vodoun are usually present in Saintus’s choreographic work, here they appeared in barest form. Less adorned by abstraction, M’angaje enacted spiritual rituals and frankly depicted possession. Props included offering bowls and traditional sequined flags adorned with esoteric symbols for the lwa (the spirits celebrated, petitioned and appeased through vodoun rituals).

The dancers were shaped by Saintus’s exacting choreographic control to display postures of the face, eyes, fingers and toes one might see in a devotee possessed by a particular lwa. And vodoun songs, rendered with soul-baring intimacy by Renette Désir and James Germain, were woven into the immaculate performances of the dance ensemble.

Some in the audience might not have identified the exact ritual meaning of some of the movements, props, and songs, yet a lack of familiarity wouldn’t necessarily dampen the impact of this work. A message of devotion carried through. Vodoun is often viewed as a scary and threatening practice, but M’angaje reveals that for many, it offers hope and strength. Based on the deeply emotional undertone of M’angaje, the spiritual practices of vodoun may be seen as one of the few resources available to lift up and sustain a people who have been battered by both nature and humankind.

The brief evening program also included Phases, which opened the show. Both pieces were strongly contemporary with a core of traditional movement and a clear artistic voice. In an era where choreography is often generated by collaborative relationships with dancers using improvisatory composition, Saintus proves that a singular, refined style transmitted through strong leadership produces master-level work. It was a refreshing contrast to the bland style often produced by a collective process, seen too often in local productions.

In comparison to M’angaje, Phases was less about storytelling and more about movement. It was somewhat monotone in its arc, giving an impression of suffering with no end, a kind of airless space. The dancers at times literally gasped for air as a component of the choreography. Phases stood on its own, but also provided a context for the message of M’angaje. On opening night, the audience audibly acknowledged the depth of impact made by each piece with a pause of silence before breaking into applause.