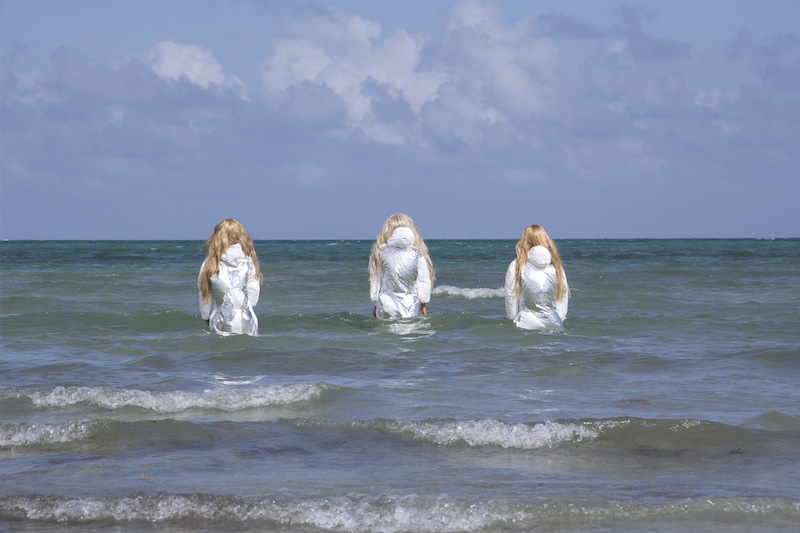 Miami choreographer and dancer Pioneer Winter knows a thing or two about producing a live performance piece that integrates its surroundings in order for the piece to become fully realized. His Ebb/Flow took place aboard a floating canoe in Biscayne Bay for the SoBay Festival of the Arts in 2012, where Winter along with dancer Marissa Nick, engaged in a dance fight. As integral as the choreography was to the piece, the way the water reacted to the dancers was just as integral. “The water created a metaphor that represented the ebb and flow of a relationship between two people,” says Winter.

Technically, Winter emphatically states that the dance for “two in a canoe” wasn’t rehearsed in a studio, and then plopped into the water, but rehearsal was “on site, every day.”

This is what six artists will encounter as part of the inaugural class of Grass Stains, who have each received $5,000 grants from Pioneer Winter Collective to develop six site-specific premieres throughout Miami in unexpected locations.

“You see something in your mind’s eye that you wish you could go and see a performance of and it doesn’t exist, so you create it. That’s what Grass Stains is,” says Winter.

Jenny Larrsen, Niurca Marquez, Ana Mendez, Agustina Woodgate, Marissa Nick and Hattie Mae Williams began their training in a four-day intensive residency this week with Stephan Koplowitz, whose site-specific resume includes 66 works and 46 commissions. On Friday, Koplowitz, Winter and the six artists — four of whom are choreographers and dancers, plus a dancer and performance artist, along with an installation artist, will reveal their selected locations. The mentor and his class will also discuss with the audience their experiences about the learning process throughout the four days.

“This is really the kick off before they begin their in-the-field work,” says Winter of the public talk, which will be held Friday at Spinello Projects. “The free event gives the public a glimpse into what the process of creating site specific works and to be part of the exciting announcement of locations.”

The locations were not pre-selected, but will emerge from the workshop. “That was part of the application to not have a specific location in mind. They could suggest, but we really wanted those selected to have a sense of openness,” says Winter.

Koplowitz explains the importance of this in the works: “My approach to making site-specific work is to think of the chosen site as the ‘script,’ the text, basically the entire inspiration for all creative decisions. I try to not have any preconceptions or bring any pre-made materials to the project. With that in mind, the dance-the site becomes intertwined so that, yes, the dance comes out of the site and the site is ever present in the work.”

Buoyed by an award through the Knight Arts Challenge and a matching award from the Florida Department of State Division of Cultural Affairs, Pioneer Winter Collective received 54 applications for Grass Stains. Panelists Mary Lisa Burns, dean of dance at the New World School of the Artists, and Anthony Spinello, founder of gallery Spinello Projects, plus Koplowitz awarded six winners.

“These six artists represent choreographers and artists who are operating at a high level in Miami, but, with Stephan’s mentoring, they will get even stronger. The hope is that as their level heightens, so will the rest of Miami’s performance communities. These are artists who aren’t afraid to get their hands dirty,” says Winter.

Grant winners are also expected to network with each other, something that the choreographer feels is lacking within the performance community in Miami.

And then there’s the important task of engaging with Miami itself. “The works may be in spaces that we pass by every day but don’t realize their beauty. With Grass Stains, I am hoping to highlight the hidden geographic magic of Miami.”

Each artist will present their works at different times. The tentative schedule, according to Winter, will be two of the works debuting in September 2016, two more in October, then the final two in November 2016.

The artists are allowed to choose a scheduled performance or to present as a Random Act of Culture — an unexpected performance without prior announcement.

Whatever they are, Winter hasn’t a doubt they’ll be transformative. “The goal is to push the boundaries of these artists’ practices, serve a sense of non traditionality, and by offering these performances free of charge, make the work accessible to everyone.”