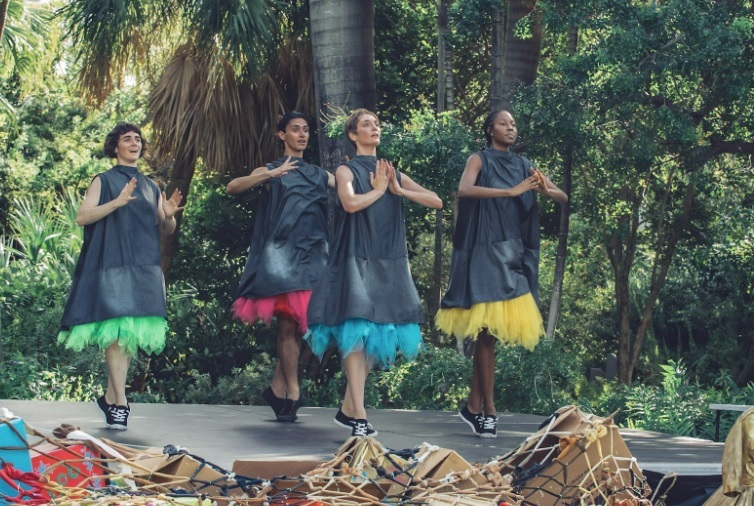 The activations were presented outdoors at the Miami Beach Botanical Garden and at Collins Canal Park. The conference took place May 9 through 12 and is expected to become an annual event.

Brigid Baker, choreographer, dancer, educator, and director of the 6th Street Dance Studio in Little Havana launched the Aspen dance performance series on the lawn of the Botanical Garden on May 9 with a site-specific reworking of Part 3 of her “Return of the Birds” trilogy, “Numinous Land.”

Dancers from the Brigid Baker Whole Project appeared, one at a time from behind trees, each carrying large, eye-catching, often bizarre, hand-constructed props, repurposed here from different Baker productions. Before the performance began, Baker shared, “Many hands have touched these pieces.” She described herself as blue-collar, and said her performances are in part about hard, manual work, about people working together to build community with dignity and in stewardship of the earth. 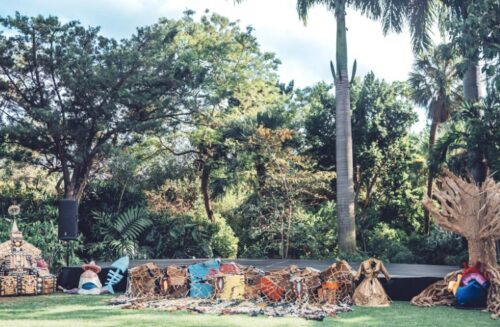 The grass of the Miami Beach Bontanical Garden draped with a large woven net in Brigid Baker’s “Numinous Land” at the Aspen dance performance series. (Photo courtesy of Rod Deal)

On the grass was a large net woven from countless pantyhose, rolled and tied together. Hand constructed, it appeared intimately feminine and introduced another central theme of Baker’s blue-collar work: the idea of women crafting as their art form. Decoratively placed on top of the net were cutout ceremonial bird shields, each adorned with a painted feather and felt beads. The shields, Baker explained, honored the nearly 3 billion birds that have disappeared across the United States and Canada since 1971, due in part to climate change.

The dancers wore grayed-from-use black A-line sleeveless sack dresses. Revealed at each of the hemlines were differing flashes of brilliantly colored tulle. Conical princess party hats with a twirling windmill sat atop each dancer’s head, creating the illusion that all four were powered to float above the stage by renewable wind energy.

Dancer Meredith Barton appeared first, holding a long broomstick with a stuffed black raven creation which flew ahead as a harbinger of what was to come. Next, a colorful soft fabric human heart was walked onto the lawn by dancer Amy Trieger. Arielle Francois, carried above her a stiffened, heavily painted golden dress. Following closely was Isaiah Gonzales, holding a stuffed, thick, pink, hand-knitted sweater jacket.

The dancers then appeared as if struggling to move an enormous gold crown, part of the “Return of the Birds” trilogy, which had to be carried in by all four with Baker assisting.

As one, the workers went from hauling into dancing, extending themselves into a graceful and painfully emotive performance accompanied by the evocative, icebreaking, journey music of Gavin Bryars’ “Trip to Archangel.”  Their movements were precisely, intricately choreographed, great control of movement and an absolute of breathing which showcased what Baker calls Lightbody, which she developed, a technical movement practice which consists of breathwork, motion and discipline.

The four returned to work as they floated onto the grass. Together, they pushed and pulled until they raised an almost 12-foot cardboard tree covered in an odd assortment of written words: “Dandelion, beaver, heather, cheetah, poppy.” The referenced words are ones that had been removed from the Oxford Junior Dictionary in 2009 to make way, as Oxford stated, for more modern terms.

On stage again, the dancers moved seamlessly as one. They spun around, huddled close, unified, separated, paired, regrouped, they hunkered deep into the ground, then stretched upwards as if they were reaching far into the sky.

Following the performance, Gonzalez explained how deeply he had felt the difference of creating the piece outdoors. “I’ve never done this outside before. It was a bit frightening, looking up reminds you how small you are.” 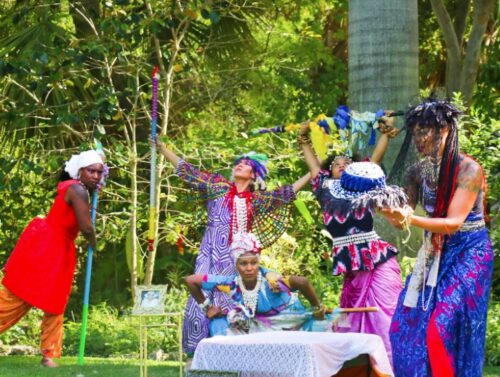 On May 10 at 4:30 p.m., again at the garden, “RoseWater” by Michelle Grant-Murray was performed. She is the choreographer, educator, author, performer, and the artistic director of The Olujimi Dance Collective. Grant-Murray describes “RoseWater” as a dance ritual piece that talks about climate change, environmental racism, generational gentrification, carbon footprint, and water ethics. The work, she said, is designed to give reverence to the earth, offer it a prayer and activate ancestral memory.

Behind the powerful climate justice activism that Grant-Murray embodies in her performance storytelling, lies something much more personal in “RoseWater,” she explained. “The work of ‘RoseWater’ is a recipe that my grandmother, Elma Julius Newton-Henry, made, water that she would put on my body every night after she would bathe me. And I remember asking her one night, “How, why are you doing this? And she said, ‘It is going to sustain you,’ she said.”

Before the performers arrived and already on grass performance space were small, individualized altars, with photographs of older women and personal mementos of hats, teacups, candles, flowers, and bottles or bowls filled with water. Each altar was personalized, decorated by the dancers to honor their grandmothers.

The female dancers entered in a procession of contained movements to strong rhythmic beats. They wore dizzying colors and styles, personalized ancestral costumes of faith, memory and identity. Arriving on the meadow of grassy altars, their movements were ritualistic and slow, then increased in pace. Finally, they grew to a crescendo of color, light, motion and music as the procession became dance.

Throughout the performance the music changed constantly, from the repeated moments of all important water sounds to the familiar, with Aretha Franklin and Kere Kay, to AfroBeat funk and fusion, interrupted by a strong female voice in spoken word, “Some women don’t give a damn if you don’t like our hair, we are out here holding our signs, reading signs, redesigning how we’ve been defined, and we are bad, we fly.” 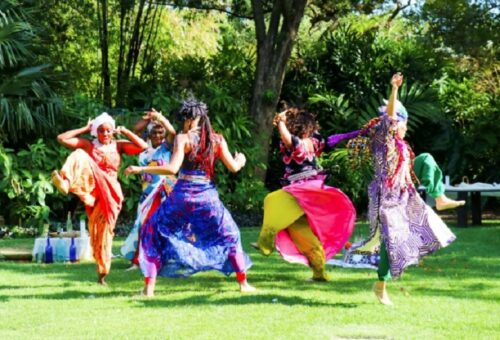 Dancer A‘Keitha Carey, veiled and dressed in long layers of electric blue and silver sequins, began a highly focused performance at the center lawn. In a dance of sorrow and loss, she cleared the surface of her altar then draped a white cloth on the empty table, placed flower bouquets then climbed onto the table and ultimately curled into a fetal position. The other dancers stood back, but in solidarity with her pounded a beat with their staff, then headed to their altars, to seek their grandmothers in photos, in worship, and in the case of Grant-Murray to make rosewater.

Across the lawn, Shanna Wood was wearing her Auntie Audrey’s 1970s bright orange afternoon tea dress. Shanna explained a few days after the performance, “I love the dress. I love what it represents for me. My family. We come from Black church experiences. It made me imagine what my great-grandmother was like. I believe that it is through dance, through the stories that we tell, we’re not only acknowledging our lineage, but we’re honoring the lineage of the people who originated here.”

“Such Rooted Things,” by Dale Andree, choreographer, dance artist, filmmaker and educator, presented the final performance day on May 11 at the Collins Canal Park.  Andree is the founder and director of the National Water Dance (NWD), an expansive state and nationwide collaborative dance project which connects nature, dancers, and audiences simultaneously through water and dance.

Originally created by Andree for the mangroves of Miami’s Matheson Hammock Park, “Such Rooted Things” was adapted to the site of the Collins Canal Park, a long narrow park designed to adapt to climate change and sea-level rise. 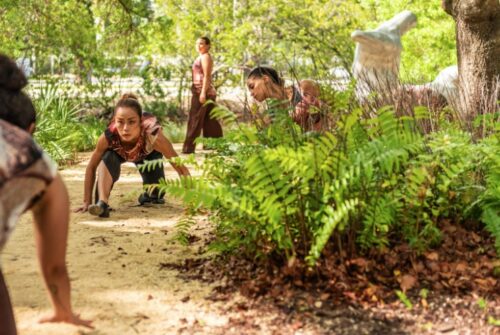 On Andree’s canal pathway stage, birds both real and created opened the performance. A group of three performance artists Kael Baez, Luciano Cortes, and Jacabel Guerra became wholly birdlike as they emulated, wielded, and propelled their paper-mâché birds made by local sixth-graders from Carver Middle School. The bird-dancers moved together harmoniously with their birds, they lifted, arched, spun, glided and dropped their arms, and they gave the students’ creations the power to fly virtually unfettered, and occasionally they even flushed out a real bird which took flight up into the sky.

As dancer Park crawled close to the ground on all fours, she dug into the dirt with hands and fingers and reached out towards dancer Franco, who in turn crawled toward Park in the same way. They reached toward each other and the space between them closed in as they formed a visceral connection to each other through the earth. In this way, dirtied but determined they connected through an impactful, improvised, and emotive dance movement. 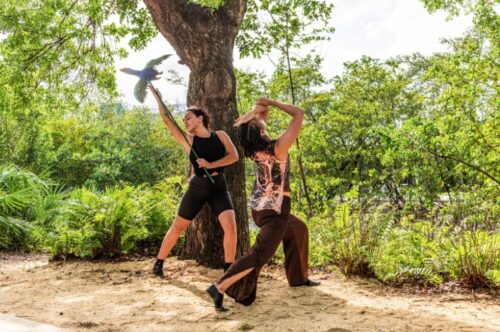 Nearby, in another space in the park, next to one of the huge aluminum sculptures from Dutch artist Joep van Lieshout’s “Humanoids,” dancer Spring unrolled herself upwards, from bent to standing she unfurled her body upwards through the air and unraveled.

With her fingers bent inwards like claws, her arms circled each other one over the next, she grasped at the thin air between herself and the tree as if there was something there that she had to find even though it was invisible. Her progress was less beautiful than painful, her face determined, her movements relentless to reach out and find something tangible in the air.

Spring has been with Andree for 30 years and after the performance said, “For me, it’s really about imagining or envisioning myself as an element in nature, as a human being in nature, not outside of it. And I think that is part of Dale’s message, that we have to remind ourselves to remember that we are a part of nature. We don’t stand outside of it.”