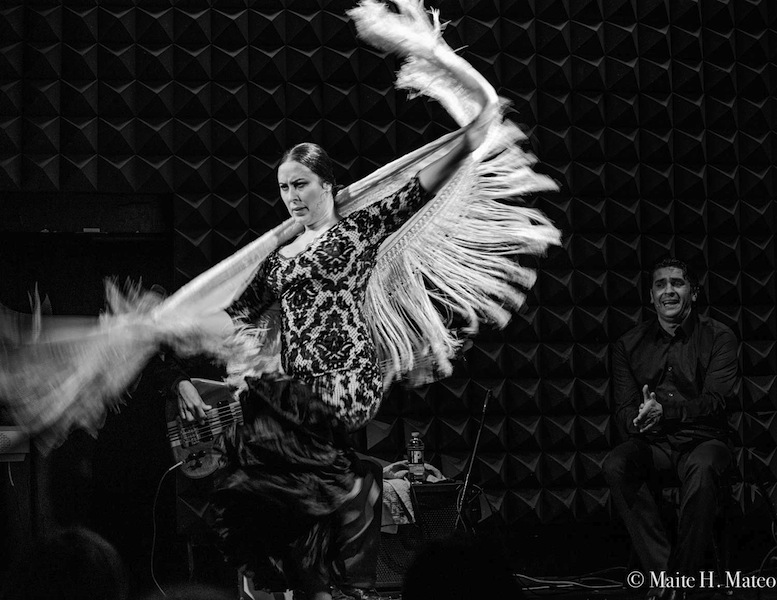 In Andalucía, Spain’s southernmost region and the birthplace of flamenco, during the dog days of summer the sun doesn’t go down until after 10:00 p.m., and it’s only then that any self-respecting flamenco festival kicks into gear. The beer and wine flow, kids play in the dirt aisles between sets and the singers, like vampires, only stop with the first light of morning.

It was with a passion for the art form honed at events like these that guitarist Paco Fonta and dancer Celia Clara began Siempre Flamenco’s Festival de Cante. “We looked around and saw that what was missing from our lives in Miami was the singing,” Celia said. The couple started the project on a shoe string budget, recruiting local artists and crossing their fingers — not only in the hopes that people would show up, but also wondering if the intense, gut-wrenching sounds of pure flamenco singing would resonate with Miami audiences more accustomed to rumbas and sevillanas and other forms of “flamenco lite.”

They needn’t have worried. Marking its 10th anniversary this year, the festival has come far, from its humble beginnings at the Manuel Artime Theater in Little Havana to consistently sold-out weekends at the Adrienne Arsht Center’s Carnival Studio Theater. The line-up of performers that will be on hand from Friday through Sunday looks back to the past as well as forward to the future of this traditional yet ever-evolving art form.

Singer La Susi will be the biggest draw, particularly for aficionados of a certain age who cut their teeth listening to Camarón de la Isla, Lole y Manuel or Enrique Morente. Along with these icons of the 1970s, La Susi helped to usher in a new age of what had been seen as a musty, clichéd art form. Paco Lucía himself discovered her when she was only a teenager singing and dancing in a Madrid tablao. Soon, she was touring with Camarón, the greatest flamenco singing idol of all time, and was given the nickname “la Camaronera” for the way in which she was influenced by his singular style.

Rumbas like “Romper el Cristal” and “Tangos del Ole y Ole” wore out the airwaves in Andalucía and her impossibly green eyes were as bewitching as her raspy, velveteen voice. Although she made her fame with “cantes festeras,” the catchy tunes with strong rhythmic lines that sold records, Miami audiences may be surprised to find out that she is equally at home singing “deep song,” that plumbs the depths of human feeling with gnawing insistence. This is not flamenco for the faint of heart, but its payoff for aficionados is intensely rewarding.

Dynasties are not uncommon in this art form, and many of this year’s artists hail from powerhouse clans of gypsy flamenco, where some still assert that “el flamenco, hay que mamarlo.” The expression means that in order to be a truly authentic flamenco artist you must have taken it in with your mother’s milk. Singer Ismael de la Rosa and guitarist Paco Fernández are cousins from the famous Fernández family of Seville, and José Méndez is the nephew of La Paquera de Jérez, one of the greatest female singers ever recorded.

Méndez is a throwback to another age, an unabashed purist whose style reminds listeners of flamenco’s roots in the taverns and peñas of the Spanish south, where men and women would beat out rhythms with their knuckles on the table tops, and, clutching a hand to their chests, would let pour forth traditional lyrics handed down from generation to generation. His voice is clear and powerful, like that of his aunt’s, his rhythms precise, his communication with guitarists absolute.

And while hardcore enthusiasts may go to these shows to hear the singing, everyone stays to see the dance. Celia Clara will perform a new choreography with bata de cola, a long trained dress that should appear almost as a partner, dancing with the performer who wears it. Sonia Olla, an exquisitely beautiful performer born and trained in Barcelona, highlights the intimate connection between cantaor (singer) and bailaora (dancer) that is evident in the best flamenco performances. In Olla’s dancing, the singing — in this case that of her partner, Ismael de la Rosa — is always the motivating force, the catalyst to which her explosive feet, fluid arms and sinuous torso respond in exquisite harmony.

This festival is dedicated to the memory of Manuel Molina, who was slated to perform here this year but who passed away in May at the age of 67. As part of the duo Lole y Manuel, he was instrumental in flamenco’s resurgence in the 1970s and ‘80s and particularly in its growing relevance for young people searching for a voice in post-Franco Spain. As a songwriter/poet, his lyrics are reminiscent of Leonard Cohen’s in their brilliant use of metaphor and narrative. The concerts will begin with an homage to his legacy, performed by all of the artists together.