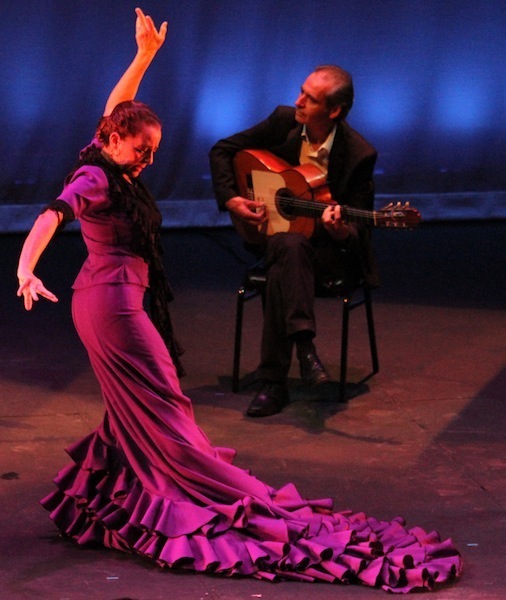 I first saw the flamenco dancer Celia Fonta perform with her husband, Spanish guitarist and singer, Paco, some 20 years ago at Café Miro, a small Spanish tapas bar on Espanola Way in South Beach. My friend Elizabeth Cerejido, a curator, who took a stunning series of portraits of Celia, and I were devotees of the duo. Celia, in particular, mesmerized us. Just as a flamenco song can crescendo into a lament, at its most heightened moments, Celia’s dancing evoked a sense of struggle, as if she were struggling against the dance itself. I sensed that this illusive quality reached beyond technique, beyond talent even, although Celia clearly possessed both. Originally from Chicago, she had lived in Spain for many years where she learned the language, culture, and dance.

Fonta and her company Siempre Flamenco will bring their version of flamenco in “Duende,” this weekend at the South Miami-Dade Cultural Arts Center.

Celia explained in a recent interview with Artburst the essence of duende: “Duende is a word used often in flamenco to explain that moment when one is singing, dancing or playing the guitar, and the power, magic, spirit, essence — all the words we use to explain the unexplainable — overtake you and you become ‘entranced,’ completely absorbed in that moment, not thinking, just letting the duende take over and flamenco magic happens. You will know when you see or hear it because you will feel goose bumps.”

De la Paz makes a case for dismantling the dichotomy of fusion – a fusion with theater, with other rhythms, with other instruments, with other voices or with other styles of music and dance — versus “traditional” flamenco: “This concept of ‘fusion’ is more of a commercial brand than a concept,” he points out. “Flamenco has been a result of fusion with other cultures from the beginning, it’s part of its nature; so, coming from Spain, I don’t understand this worry about fusion. Being ‘fusionado’ is part of being flamenco…. And, at the end of the day, only a few of those encounters will be integrated into flamenco. But it’s part of being flamenco, feeling the necessity of making contact with other sounds, movements or styles of arts.”

Performer Niurka Marquez defines duende as a capacity to connect: “My perception of it over time has expanded to include other understandings, like our connection to the earth under our feet and our reaction to a really beautiful musical phrase or a deeply felt song. It is always present because it is precisely about being present and to me, that is what lies at the core of my art.”

In literary and dance circles, the word duende has often been romanticized. In the end, it may be important to demystify the word because it has become associated, at times, with convoluted ideas and exoticism. As de La Paz asserts: “Duende is nothing, and it could be everything, but it’s not the property of flamenco: It’s part of life. Duende could be present in a gaze, or in a gesture or in a child’s smile. You only have to be able to recognize it.”