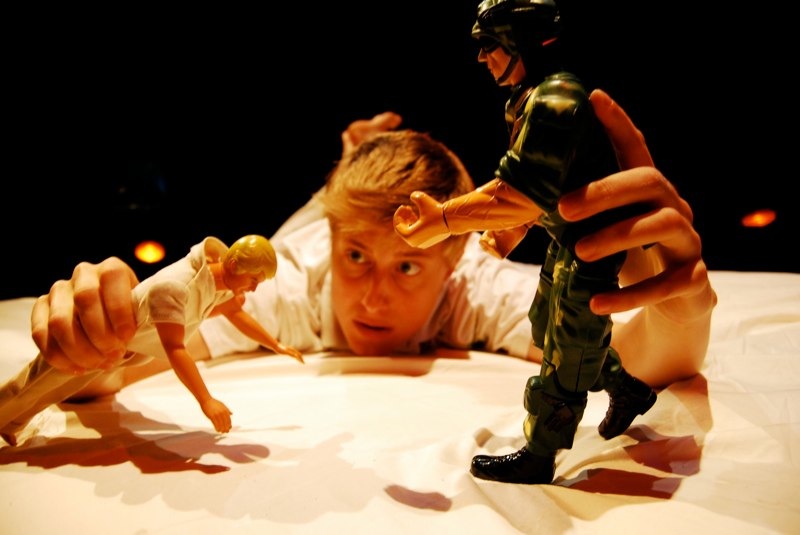 Transgendered performance artist Scott Turner Schofield is a collector of stories. Growing up in the South, the tales that were told about the gay and trans community were the ugliest kind of fiction. The story he tells in his one-man show, Becoming a Man in 127 Easy Steps, coming to MDC’s Live Arts Lab Thursday through Saturday, has the advantage not only of being true, but also of being enlightening and entertaining. We talked to him about his tales and how they unfold on stage, which differs with each performance.

Tell me about your show Becoming a Man in 127 Easy Steps. Does it work for eighth graders?

Does it work for eighth graders? Hmm…The show is different every night, because there are different stories picked by the audience in each performance. There are a couple of sexually explicit stories, but I mean nothing more than what they would see on television. It’s probably PG 13, as long as you’re okay with them asking some questions later.

Let’s go back in time. You were raised in the South?

I grew up all over the place. I was mostly raised in Texas and North Carolina and Georgia.

It’s why I am who I am today. When I was 15 years old I was going to high school in Charlotte, N.C. and [the award-winning play centered around the 1980s AIDS crisis] Angels in America came on a regional tour; there was such a huge fight that the County Commission voted to pull all of the money from the arts–the symphony, kids after-school programs…. Our elected officials were saying things like, “All homosexuals should be pushed off the face of the earth.” The thing about teens is, everything is really intense in adolescence. And so it wasn’t like those words were just spoken, it’s like they were blasted into my face.

That is the first moment that I had ever had a suicidal thought — it told me that the government thinks that me, a child, that I am unworthy of being alive because I’m different.

That was a pretty deep spiritual moment. It’s also when I tapped into my righteous activist anger. So, it was a double-edged sword. It was the moment of the greatest pain of my life but I was also in the South, which has a deep civil rights history and a long tradition of how to do that, so that’s where I learned.

What do you say to kids today who are going through some of the things that you went through?

I would say, look, I spent 20 years looking really hard for what was wrong with me and then I realized that there is nothing wrong with me. Whatever your identity is, whatever words you use for it, however you feel about that, there is absolutely nothing wrong with you. There is something wrong with someone who is going to hate you because of it. But if you are coming at your life with love and if you are helping the community through your life, and the lives of others, you are doing it 100 percent right.

What should we expect from the performance?

The show Becoming a Man in 127 Easy Steps is overall a lighthearted comedy about my life and process of becoming a man.

I have 127 different short stories that are about me and my experience. It’s definitely my experience and not the experience of trans people in general. You get to the universal through the particular, right? I have these 127 stories and only a few of them are about that moment when I decided to change my name and my social identity. There are a bunch of stories about what it was like to be a kid and being very clear about what my identity was and being told I was wrong about that, and the effect that that had on me.

Then there is the experience of realizing that I was trans and the exhilaration of finally having the right label to put on myself. There’s the moment when I transitioned and then there’s everything that happened afterwards. Other stories include what it’s like to be in a relationship as a man when you’ve been in all lesbian relationships before.

It’s just a really wide variety of stories that I choose from, funny stories. I chug a beer in one story — that’s all I do.

People have interesting experiences at work. Funny sh** happens with friends. That’s really the point of the story, but you’re seeing it from a transgender person’s outlook. Which you usually don’t get, so you may as well come and see it.

Are you trying to get at our common humanity?

Here’s the dirt and let’s have fun playing in it.