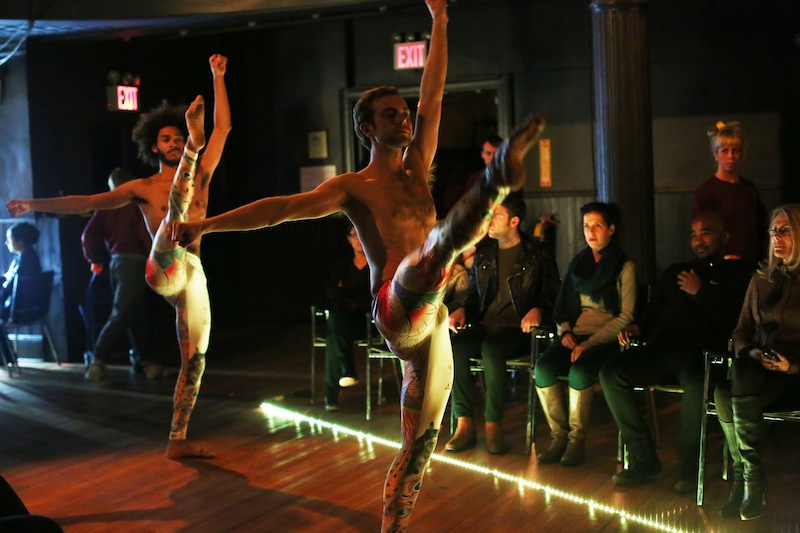 On December 3 and 4, the same theater served as the kitsch stage for Ryan McNamara’s latest performance piece, MEƎM 4 Miami: A Story Ballet About the Internet. In MEƎM McNamara translates the Web’s pixilated multi-verse into a ballet for the Internet.

In line for the second performance, I made a new friend in Edie Nehls, advancement director for the Museum of Contemporary Art in San Diego, who was in town to help museum trustees navigate the Basel galleries and admitted she was entirely “without expectations” of McNamara’s piece.

Still chatting, we were led into the purple auditorium where ushers diverted us towards two large squares of chairs — one right before the stage, the other toward the back of the room. The arrangement left open a large central space beneath the hall’s enormous chandelier.

Moments after taking our seats, the hall went dark and the ballet opened to three dancers in black halter-tops and deep blue tights circling the stage in a repetitive shuffe-shuffle-skip step set to a jazzy club music mix. Projected on the wall above their heads a moon of orange light seemed to rest on a mysterious shelf.

At roughly the five minute mark, a right leg jutted up from the shelf.  Previously hidden by the angle of sight, a young woman’s animated torso and arms gradually shifted into view moving like a caffeinated robot as the trio circled below.

A whistle sounded. Movements sprang up throughout the theater. To the left a vaguely hermaphroditic Dr, Frank-N-Furter writhed before an illuminated mirror. A phalanx of stagehands began wheeling away still seated audience members using hand carts. Some formed a line of surprisingly passive, Art Basel hipsters on the main stage, many of whom began recording the dancers in front of them on smart phones, apparently oblivious to having become part of the show.

Then came my turn for vertigo as my chair lifted up and back and was then wheeled away to make a new row in front of two Richard Simmons throwbacks gyrating spontaneously beneath the chandelier.

That was the first of many queasy re-positionings. Some of the choreographies were clearly meant to recall the Web’s irrelevance. Feeling forgotten in a back room, I sat for ages as two women slowly rotated in place, one head glued to the other’s shoulder.

Most performers seemed oblivious to the shifting pairs of eyes, but one young dancer in torn black shirt and Guy Fawkes beard prowled between walls in a back hall, then intensely held our gazes as he menacingly stalked his temporary audience.

A blonde Borg in head phones, pale-green tights, and waist-long dread locks danced for a mirror that ran the length of her elevated stage. In her own world, we were immediately placed in ours as a stagehand fitted us with headphones that channeled us the music that she — presumably — also heard.  After an hour a final whistle sounded. Wheeled back to the original hall, the dancers now stood still, backlit, fixedly looking down at us from the balconies while a voice called out names: Ryan, James, Sarah, Nancy, John…

The lighting, the surveillance of the dancers and the roll call reminded me of an internment camp. I realized I was listening for my own name, and wondering, if it was called, what would that mean in this virtualized space?  McNamara’s choreography of chairs had left me feeling atomized, cut off from even my elegant friend, Edie, who would later confess the night left her feeling, “moved between Websites,” her “focus and attention only being asked for a few moments.”

And perhaps the ballet had summoned back the spirit of Hefner himself. But I was left reflecting on the fate of his work and how in network dominated societies of control we all become, as Deleuze terms it, dividuals — embodied beings progressively flattened into lines of code.