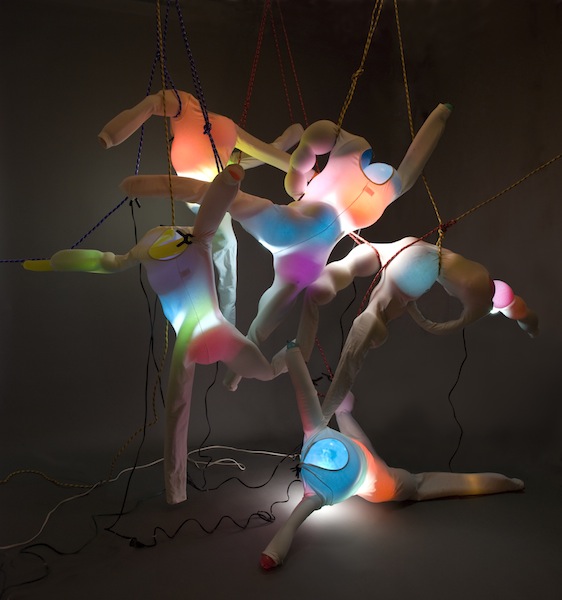 Click.click.click.click.click — and bright screens flood by with Internet news feeds, utopic shopping, and afternoons at work killing time Google mapping it through Paris streets. We’ve all heard the mantra of the Web’s sobriquets — information superhighway, great democratizer of access, peace pipe for a global media village.

And yet more recently, and more insistently, the Internet parades by its own ominous prophets – Snowden, Greenwald, Assange, Anonymous – each assuring us that someone’s algorithm maps our online consciousness to be tantalized by a Facebook streaming ad (or analyzed by an NSA contractor).

Ryan McNamara’s work, MEƎM 4 Miami: A Story Ballet About the Internet, invites us to remember the enthusiasm this ubiquitous digital interface continues to excite at regular intervals as it opens up new possibilities for communicating and creating. It also claims to reflect critically on the range of Internet-linked practices at the heart of many of our routines.

MEƎM 4 Miami — being performed as part of Art Basel Miami Beach — is McNamara’s ambitious attempt to translate the pixilated multi-verse into human movement. As McNamara mixes music, audience members are literally carted by stage hands with hand trucks from one choreographed ‘portal’ to the next where dancers perform hip hop, modern, and ballet in different sections of the darkened theater.

The performance engages several coexisting conceptions of the Internet: as a communication commons; as surveillance infrastructure; as downright mind numbing clutter; as motor for a 24/7 infotainment culture.

RoseLee Goldberg is the founding director and curator of Performa, the leading national organization that explores and promotes live performance and which will be presenting McNamara at Basel, describes the effect of MEEM this way: “It’s layered and fragmented, as when many screens are left open on your laptop when you’re online.”

For McNamara, the performance tricks us into remembering our basic ‘embodiedness’ easily hidden by our now cyborgic dependence on ever-at-hand smart screens. The dance portals throughout the theater create physical analogues of the cluttered nature of the digital realm, and the frequency and speed with which material is copied, created, appropriated, repeated, plagiarized, mined, projected, and passed on.

Created as a Performa Commission for the 2013 Performa Biennial in New York City, the original work, Meem: A Story Ballet About the Internet, premiered to critical acclaim and was awarded the second Malcolm McLaren Award as the most innovative and thought-provoking performance of Performa 13. As this Miami performance of MEƎM occurs as part of Art Basel, Ryan intends this Miami MEƎM to reflect both the character of the city and the event.

As McNamara explains, “Not all art is easy to sell in an art fair booth. It is impossible for a performance like MEƎM  to remain static. Variations in location, audience, and time palpably shift the piece, making MEƎM 4 Miami a new experience that will only fully reveal itself each night as its being performed.”

So, whether it’s the latest cyber Monday numbers showing retail’s continued Internet creep or the images from the Rosetta probe beamed back from a comet’s craggy surface, the Internet’s dreamscape has changed behaviors and expectations now for over 40 years. Perhaps McNamara’s MEƎM 4 Miami will finally grant our ‘hooked-up’ selves a vantage point from which to analyze our now decades long cyborgic dream.

“MEƎM 4 Miami: A Story Ballet About the Internet” is Art Basel’s second collaboration with Performa and will be presented at 8:00 and 10:30 p.m. on Dec. 3 and 4 at the Miami Grand Theater at Castle Beach Resort, 5445 Collins Ave., Miami Beach; tickets are $30, stand-by only; for further information artbasel.com/miamibeach/meem4miami.

On Thursday, December 4, at 4:00 p.m., Ryan McNamara will be in conversation with the art historian and critic Claire Bishop. The talk is part of Art Basel’s Salon program and will take place in the auditorium in Hall C of the Miami Beach Convention Center.