Rumpletsiltskin Puts On His Dancing Shoes for Momentum 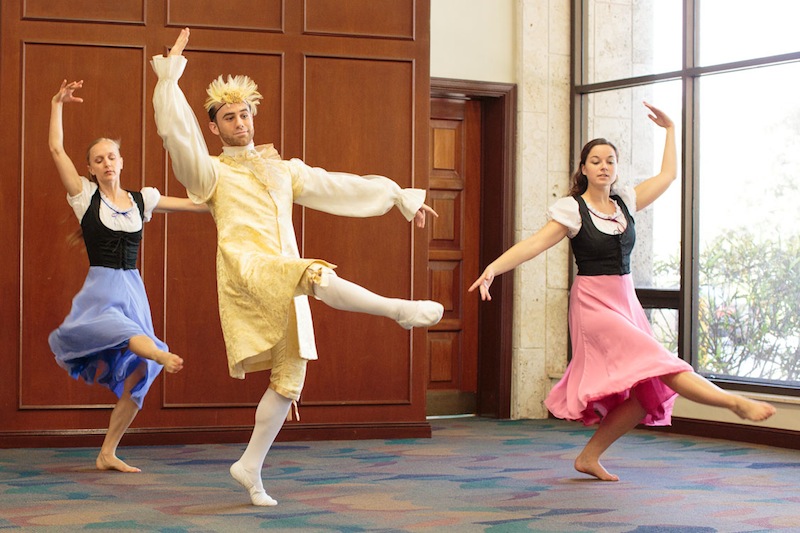 Always with an eye for movement, Momentum Dance Company’s founder and Artistic Director Delma Iles chose to base the company’s latest children’s ballet on Rumpletsiltskin in part because she was intrigued by the movement possibilities that come with spinning straw into gold. Iles also wanted to tap into the idea of wishing as the catalyst for change: “Rumpletsiltskin isn’t as prominent as some other [tales] in today’s culture. But the ideas about making something happen because you wish for them, and finding magical unexpected help are still current. Of course, the thought of turning base objects into gold has been around since the Middle Ages,” says Iles.

For those who need a refresher, Rumpletsiltskin is a fable from the Middle Ages about a miller who tells a powerful king that his daughter can spin gold from straw. The girl, desperate to please her father and the king, receives help from the diminutive Rumpletsiltskin who magically appears and offers to help the girl in exchange for her firstborn child. She agrees to it, thinking she will never have to make good on their deal. But when the time comes, the cunning little man says he will release her from the contract if she can guess his name.

Hollywood and television are not lacking in renditions of the classic fable — ABC’s Once Upon a Time, set in a contemporary quaint town and numerous other parallel universes, is the most relevant example. The TV show’s crafty Mr. Gold has made numerous life or death deals with other characters, proving that a great story can always be spun in a new way.

Momentum’s production features color-blind casting, and Rumpletsiltskin will be played by a woman: “We like to select stories that are equally appealing to boys as to girls,” explains Iles. “That is why we have never done Cinderella or Sleeping Beauty.”

Now in its 32nd year, and with over 40 performances this season alone, Momentum Dance Company is one of the few local dance companies that is committed to creating dance performances for young audiences on a regular basis. Admission is also often free of charge, which is the case with Rumpletsiltskin. “We think that children deserve to have access to intelligent, fun, thoughtful, and developmental dance just as much as adults, probably more so, says Iles. She adds that kids make great audiences: “We like kids and we like doing things with them — call us selfish! Dance is our medium, so we share it with kids.”