Rude Mechs: Gaming, Evolution and Performance in the ‘Now’ 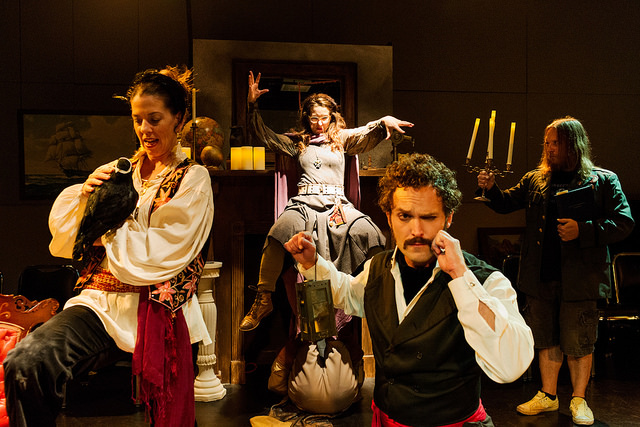 Treasure hunts offered to an audience as an integral part of a theater performance? An interactive immersive event inspired by evolutionary biology and the Brontës?

Yep. All that and more as maverick theater collective Rude Mechs comes to the Lightbox at Goldman Warehouse presenting Now Now Oh Now, with several performances every weekend night starting Friday (limited to 30 audience participants for each) and running through March 1.

The group, founded in 1995 in Austin, Tex., describes itself as a “genre-defying cocktail of big ideas, cheap laughs and dizzying spectacle.” And it has a track record to prove it. Back in 2013, MDC Live Arts — a co-sponsor of this series — introduced the Rude Mechs to Miami with a performance where the ensemble reduced A Street Car Named Desire to the lines of secondary actors in a clever play on method acting. Small wonder Rude Mechs won the award for the best new play by an ensemble, at what is among the world’s most innovative arts gatherings, the Edinburgh Fringe Festival.

We talked with company member Shawn Sides, who describes herself as the one dressed as Stevie Nicks at the performances.

So what is all this about a treasure hunt at the Lightbox?

SS: Rude Mechs has discovered that our audiences are happiest, and we are happiest, when the audience is actively participating in a work, not just watching. It’s then that a tremendous amount of heat is generated, and theater becomes alive. But I’m not talking about pulling some poor soul up to a mike or pushing somebody suddenly in the spotlight. So yes, there will be a treasure hunt.

Our audiences at each performance will be small, 30 people. And during the second act our audience will find themselves becoming members of a clan that must follow clues and solve a puzzle to reach the third act.

Does anybody stay lost in the second act?

No, no. We couldn’t have that. But I don’t want to say too much more. It would spoil the fun. But know this, a different puzzle will be used at each of our performances.

Then would you tell us how Rude Mechs worked with audiences in one of your previous plays?

One of our audience favorites was Get Your War On. The play played with themes of carnivals and the myth of The Western [movie genre]. The play’s mechanics revolved around when the audience would watch carnival antics and when they would participate.

So, we presented our audience a carnival with booths where they could learn how to tie rope or have a Margarita or talk into a video camera about all the ways their parents messed them up. We also had various foods fried in the shapes of famous Westerns. A great time was had by all.

Your Miami presentation Now Now Oh Now is billed as “Darwin meets Dungeons & Dragons,” science meets gaming and science fiction. Can you tell us anything about the ideas that are at play here?

I’ll say this. Perhaps “survival of the fittest” cannot explain why one bird loves one particular song.

Yep, the treasure hunt is on.