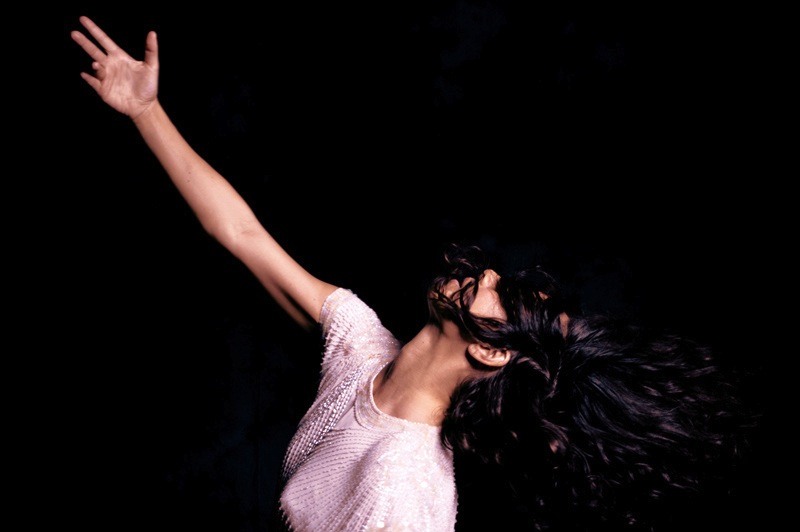 Local choreographer Rosie Herrera, one of Miami’s notable creative offspring, is known for a particular style of snarky and darkly humorous dance theater. But for Cookie’s Kid, her newest project with Miami Light Project opening this weekend, Herrera is turning inward to a more vulnerable creative space. We had a chance to speak with Herrera about her creative process and the final product that is still in the works.

Cookie’s Kid is a solo piece. That’s new for you, right?

It is new for me on a lot of levels. Firstly because it’s a solo work, which I’ve not done before. And I usually don’t perform in my work, unless someone’s injured. So it’s the first time that I am performing in my own work as well. That’s a huge departure.

How do you feel about being a performer this time?

If I’m being totally honest, it’s a huge struggle. It was a very conscious decision for me to take myself out of my work. Because when I was dancing in my own choreography, I felt like I couldn’t really enjoy being a dancer. And I also couldn’t enjoy being a director. But when I was originally approached by [Miami Light executive director] Beth Boone, the minute that she suggested it, it scared me so much! I was like, “Oh God!”

But on a personal level, I think this was important for me as well. The story is deeply personal and that is something I struggle with, because I’m a surrealist and so everything I do is deeply personal, but hidden underneath many layers of symbolism.

That sounds like a really juicy creative process. It’s like you’ve been directing it from the inside.

Yes, as much as I can. I work in a very specific way. I don’t use mirrors, I don’t record rehearsals. But with this, I just had to be flexible. I film myself, and then I go back and I watch it. Which is never an accurate portrayal of what is actually happening on stage. But I think it’s important, in a solo work … you really have to approach it as a performer and just be a person onstage having an experience. I also feel like, subconsciously, there is a little bit of hiding.

When it’s other people, I’m like, “that’s so powerful!” but when it comes to me, it’s like, “ugh, this is not interesting enough, nobody wants to hear this,” all these weird insecurities. Which I think, like you said, will be very juicy.

In a way, you’re allowing audiences to view you in a state of uncertainty.

Yeah. There’s a rawness there that I think is appealing. And I’ve been submitting myself to that process. The piece is drawing a lot of inspiration from my family, particularly my mother, who I had kind of a tumultuous relationship with. Every work that I have, I try to start from a gut feeling. And then intellectually, aesthetically and personally, find my interest and deconstruct it that way.

With this, it was about being tough, and the emotional oppression of toughness. My mother is a tough-ass South Bronx Puerto Rican with a nickname “Cookie.” Everybody calls her Cookie for the irony of its sweetness, because she’s not that way. I was interested in this toughness, and how it shaped me, and part of that process is to go looking for answers, and some history, and to connect the dots in a way that I’ve never done before.

And any woman who is talking about her mother, I’m sure if you sit with it, you are two minutes away from crying! It’s always a tumultuous relationship, and incredibly complex.

What pieces of your personal story have you found?

I reached out to my family in New York, and I knew that my grandfather was a guitarist. But mostly what I knew is that he was an alcoholic, and he was really abusive, and we never really knew him. It was like that side of the family. But I was completely floored that this person that I had painted this picture of in my mind, that was really dark and not present, had such incredible depth emotionally, as a composer, as a singer, as a person.

And I sat with that for a while, “Wow, this is my mother’s father.” This shaped her in a way that I could never understand. And so I reached out to her again and she sent me a box of 45 cassettes — all his music, all his poetry. Tapes of my family just hanging out in the Bronx, endless hours of him talking, the kids talking, him reciting poetry kind of half-drunk. And then also him singing, and playing guitar and whistling, and of course that changed my whole freaking show!