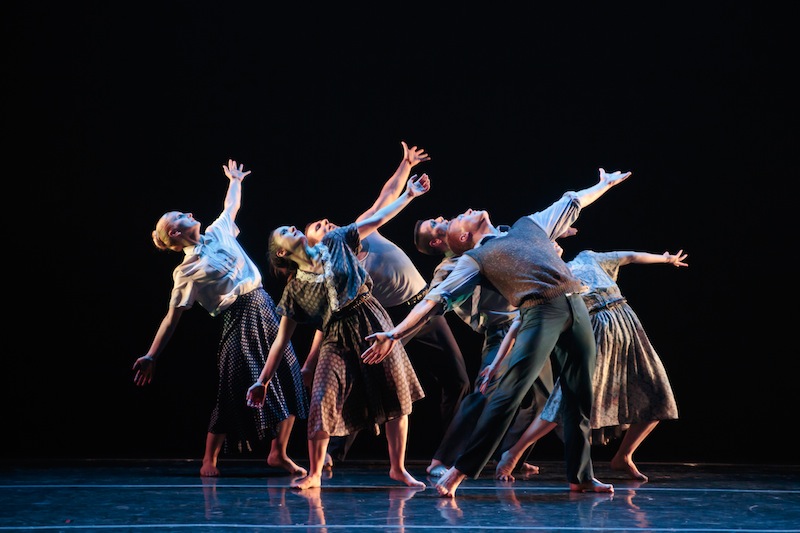 Choreographer Pascal Rioult realizes the timelessness of one of his pieces. It’s a few days after the November attacks in Paris — Rioult’s birthplace — and he’s pondering his choreographic work Wien, a darkly moving dance about a civilized world’s spiral into violence.

Wien will be part of Rioult Dance NY’s four-piece program at the Arsht Center for the Performing Arts on Friday, Dec. 11 and Saturday, Dec. 12.

Set to Maurice Ravel’s La Valse, Rioult depicts a deconstructed take on proper European society disintegrating between the two world wars. But it was the Los Angeles riots in 1992 that sparked the development of Wien and current events that have him re-thinking its relevance.

“It’s really about how a group of human beings can undo the fabric of society and do evil to each other and really how little it takes.” Rioult steps back, however, and says that he doesn’t make accusations in Wien. His pieces are not narrative, he cautions. “Very rarely there is a story,” he says. “It’s usually emotional content that is between the lines, therefore as the audience is going through it, they can grab whatever is significant to them. They are left to make up their own minds.”

His modern dance pieces are always choreographed to classical music. It is the way he must create.

“There has to be a tension in the score,” he says. The Arsht program will feature two works set to the music of J.S. Bach (Views of the Fleeting World and City) and two to Ravel (Wien and Bolero).

Combining his love for physicality and the classical music he “absorbed” from his mother, a classical pianist, Rioult found a dance niche in creating what shows up on stage in highly charged contrast. “I love to juxtapose the classical music and classical form and give it a contemporary twist — how the modern works with, and against, the classic.”

Rioult’s road to professional dance wasn’t a perfectly carved path, either. He never expected to be a choreographer running his own company, which he founded in 1994. “In France, I was what you in America would call a jock,” he says. A track and field athlete who went on to teach physical education, Rioult said he was drawn to movement and the connection between how the body moved and music. “I loved to dance socially. I would dance like crazy all night long. I didn’t know I could make a living doing it.”

After visiting contemporary dance classes in Paris, he became mesmerized. At 25, he moved to the United States and started with Merce Cunningham on a six-month scholarship from the French government.

“I realized something was missing there for me, though, but I had little knowledge of dance at this time,” he says. Once Rioult found his way to the legendary Martha Graham, he felt that things just clicked. “When I discovered her, I knew I was home.” Rioult also met his wife, Joyce Herring, while both were Graham dancers. She is co-founder of Rioult Dance NY and is associate artistic director. “We complement each other,” he says.

As a Graham principal dancer, Rioult interpreted many of the most prestigious roles in the Graham repertory. In 1990, Graham created the central role (Death Figure) in her ballet Eye of the Goddess for him.

From his close relationship with Graham, his work contains the principles and essence of the Graham technique — sharp, angular, and direct movements, but he infuses it with his own drama. “I like to say that I’m in the continuum of a certain lineage of American modern dance — pushing it forward. My choreography isn’t just about dance or about making beautiful lines; it’s to use the technique at the service of human expression. It’s more poetic than dramatic.”

The finale of the program is Bolero, Rioult’s interpretation of Ravel’s one-movement orchestral piece. “The music has been very overused in movies, commercials, you name it, and it has been choreographed so much, too.” Yet the rabid Ravel fan had to create something from the composer’s most popular piece. “I tried to find the obscure statement, a social or sexual statement. I struggled.” Then he realized what he needed to do. “Ravel said, and I quote, ‘I’m going to figure out a way to repeat these two phrases of music as much as I can without boring my audience.’ I decided to challenge myself and do the same thing in my choreography. The dance becomes an engine that starts slowly and then builds and builds and builds. It’s a tour de force for the dancers. There’s an electricity to it.”