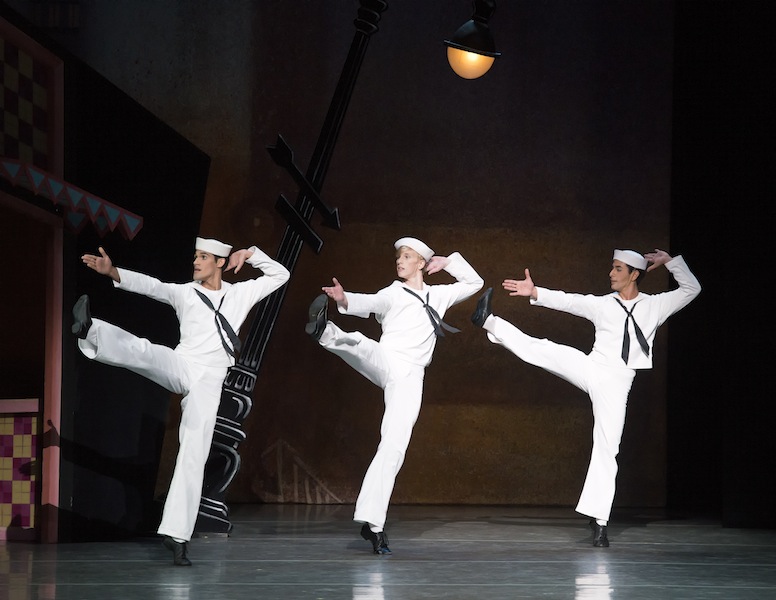 There is magic in numbers, and three especially conjures up power. Multiply that by 10 and you get the potency of the artistic spell Miami City Ballet has been casting for three decades. The company began celebrating its 30th season at the Arsht Center last Friday with a pointedly varied program — and a promise that the enchantment shall continue, guaranteed by a bonus, pre-main event garland dance interlaced with students from the MCB school.

In fine-looking display there came Balanchine’s compressed Swan Lake for heirloom classicism, Liam Scarlett’s Viscera for high-strung contemporary excitement, and Jerome Robbins’ Fancy Free for a mid-20th-century ballet’s flirtation with musical comedy. But the revelation that flew out of this multi-flavored birthday cake was newly hired principal Simone Messmer, who exactingly portrayed Odette, Queen of the Swans.

Using Tchaikovsky’s music for Acts I and IV of the full-length 19th-century ballet, Balanchine paid tribute in this one-act Swan Lake to his Russian legacy, especially Lev Ivanov’s choreography, after brushing away the cobwebs from the creaky Gothic romance. The essence of the fantastic tale remains: lakeside, a royal hunter falls for a birdwoman bewitched by a sorcerer — love takes wing but loss awaits at the landing. No need to get tangled up in a timeworn yarn, however. The real story here lies in the choreographer’s championing of a filtered classical beauty, satisfying the tastes of traditionalists while remaining true to his innovative values. In the shifting symmetries of the ensembles, in the held tensions and unleashed motions of the solos and duets, these images retain the weight of their lengthy past yet gain a fresh vitality.

Once the relationship between Odette and Prince Siegfried (Rainer Krenstetter, more cautious than impassioned) was established, we could sit back and relish the joys of pure dancing. And purity, indeed, was what Messmer offered, her emotions distilled and her movements refined. She showed fortitude in solo work and pliancy in her partner’s arms — the brave stance of a woman in doomed love shot through with the alarm of a flustered creature.

The group dances, too, brought their share of feminine stamina and avian flutter. The signature Dance of the Cygnets joined Leigh-Ann Esty, Ellen Grocki, Ashley Knox, and Zoe Zien for those well-known delightful little jumps and persnickety steps. In the Pas de Neuf, Jordan-Elizabeth Long ensured elegance at the helm of eight other ballerinas. The darting dozen of the Valse Bluette had Emily Bromberg in her lyrical element guarding metrics with aplomb. Of course, a pack of bow-wielding hunters and Rothbart, the wicked wizard, also put in an appearance, but here the foul took a back seat to the fowl.

Having had its world premiere with this company just over three years ago, Viscera let some dancers reprise roles they originated. Back then, the company earned bragging rights for giving life to a wonderful new creation. At this time, they’ve solidified their artistic ownership with every fervent move. Fleeting but clear, athletic but spiritually self-possessed, their performances galloped on Lowell Liebermann’s Piano Concerto No. 1 to the mandates of Scarlett’s tone-sensitive and beat-smart choreography.

The groupings and single exclamations of the opening and closing sections of this three-movement ballet sped by but never became blurry. Jennifer Lauren, Callie Manning, and Zien rightfully gained prominence bringing into sharp focus — alongside Renato Penteado and Kleber Rebello — demanding step combinations. Yet other ensemble members — say, Michael Sean Breeden and Esty or Jovani Furlan and Knox — in their coming together and quick breakaways also kept this organism taut and pulsing.

The formidable Patricia Delgado cut a solid shining figure, gold in the rushing stream, as she stood out in bold contour throughout the fast passages. And, between the outer two movements, Jennifer Carlynn Kronenberg and Carlos Miguel Guerra, alone on stage, renewed the claim they staked on the adagio at the 2012 premiere. Their interpretation managed to be both thoughtful and impulsive, with a suspenseful longing in pauses and sustained positions and an urgent fulfillment in difficult lifts.

Fancy Free, to Leonard Bernstein’s jaunty score, featured three sailors on leave in the big city, a premise that later evolved into the Broadway musical On the Town. Joking around and taking in the urban hubbub, the fellows wrangled up female company for drinks at a bar. But, make no mistake, the gals (Rebecca King, Messmer, and Long) served mostly to set off the guys, and the kicks here came from a testosterone cocktail. Renan Cerdeiro, Chase Swatosh, and Rebello served this — both shaken and stirred — with great flair. The best sequence had them showing off their prowess, with Rebello as the most assertive contender turning splits into a weapon of miss seduction. The competition became so heated it turned into a brawl, just another excuse for the boys to bond. No one got the girl, but we get the point: even the most frivolous bits of Americana — and these hijinks could have come from the comics — gain stature hooked up with ballet.