Miami City Ballet opened its 37th season at the Adrienne Arsht Center with a reprisal of choreographer John Cranko’s ballet, “Romeo and Juliet,” set to music by the Russian composer Sergei Prokofiev. It is the third time MCB has presented Cranko’s ballet, the first in 2011 and the second in 2014.

Their attempt to pursue happiness ends tragically with their deaths.

The ballet is based on William Shakespeare’s classic love story which first debuted in January 1595 at the Curtain Theater in London. 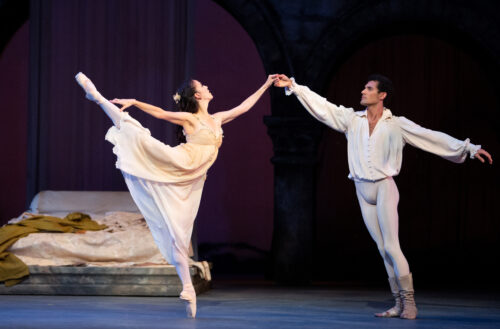 The Kirov Theater’s choreographer Leonid Lavrosky first presented “Romeo and Juliet” in 1940.   Sergei Prokofiev composed his ballet in 1935 for the Kirov Theater’s adaptation of the classic.   The Kirov ultimately rejected Prokofiev’s score because they considered the ending unsuitable for dancing.

South African ballet dancer and choreographer, John Cranko, was the first to bring Prokofiev’s score to the stage in 1962 when it premiered in Germany with the Stuttgart Ballet.  The first American company to perform Cranko’s “Romeo and Juliet” was the Joffrey Ballet in 1985 in New York.

In addition to the score, the ballet showcases gorgeous costuming and memorable sets.

For instance, the masked ball scene (Act 1, scene 4), opens to a stage full of male dancers in grand Venetian masks draped in full-length gold, black and scarlet capes.  The men begin the scene with four ominous stomps and then walk a pattern of four long steps to each side.

The women enter in full gowns and weave between their ranks. The sequence is simple but executed beneath a billboard-sized golden lion head with a flaring mane and bared teeth.  The assemblage exudes courtly power as the Prokofiev score masterfully trades fifths up and down the scale.

Directed by principal conductor Gary Sheldon, the Opus 1 orchestra – especially its horns, percussion and double reeds – made the Prokofiev score a highlight of the weekend.  Flutists Karen Fuller and Elizabeth Lu were oustanding.

Another happy feature of the weekend was the different castings for each of the performances, which allowed audiences to glimpse talented corps dancers tackling leading roles.

On Friday, Katia Carranza and Renan Cerdeiro danced the parts of Juliet and Romeo.  The two principal dancers brought strong technique and theatricality to the roles. 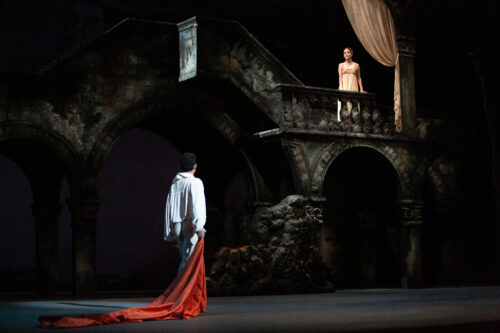 Renan Cerdeiro as Romeo and and Katia Carranza as Juliet in Miami City Ballet’s production of John Cranko’s “Romeo and Juliet.” (Photo courtesy of
Alexander Iziliaev)

The two were lovely during the balcony scene as Cerdeiro press-lifted Carranza overhead and Carranza melted her suspended body against his.

Cerdeiro’s double tours were the strongest among the weekend’s male leads while Carranza was a gorgeous Juliet who handled well the role’s demanding theatricality. Her dance sequences deepened a sense of the character she performed of a young woman experiencing her first real love.

On Saturday corps dancers Cameron Catazaro and Nina Fernandes took up the title roles.  The physical height difference between the two emphasized the youth of the characters (Romeo’s character is roughly 17-years-old and  Juliet is 13).

Also, Catazaro partnered Fernandes well when flipping her in arabesque and supporting her in lifts. The two were convincing lovers when they nuzzled during the balcony scene. 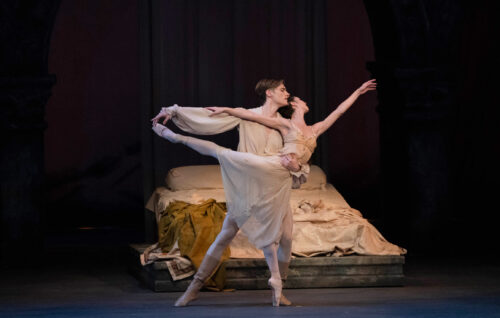 During some sequences, Landegger struggled, visibly winded.  However, Valero’s dancing and acting was consistently exquisite.  With careful pantomime and gesture she brought to life the codes of courtly propriety that Juliet uses to distance herself from her betrothed Count Paris – a role performed well by principal soloist Chase Swatosh on Friday and Saturday and corps dancer Francisco Shilereff on Sunday.

The ballet is strong on theater and many of the dance sequences behave as motifs that give body to the characters performed.  For instance, Romeo’s good friend, Mercutio, is witty, playful and wild, and his sequences expressed the character’s restless brilliance with lots of quick turns and sharp pivots ending with arms wagging and head bobs.

Alexander Peters made the sequences look effortless, which emphasized an important feature of Mercutio’s character as a brilliant swordsman.  Alexander Kadan on Saturday and Shimon Ito on Sunday were equally strong in the role. 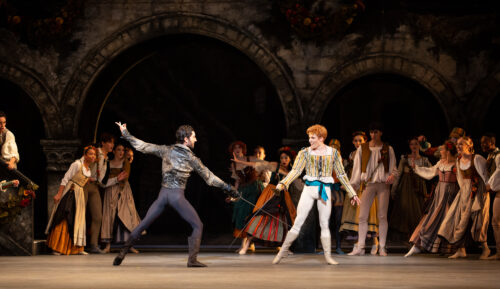 Damian Zamorano and Alexander Peters in a duel in Miami City Ballet’s “Romeo and Juliet.” (Photo courtesy of Daniel Azoulay)

Also noteworthy was Damian Zamarano as Juliet’s first cousin Tybalt.  With black beard and hair slicked back he made for a powerful and threatening presence onstage.  However, Steven Loch on Saturday strengthened the sense of Tybalt’s villainy through small additions as when he extemporaneously grabbed his sword hilt just as the lights went out as the two families faced off in the opening scene.

Performances of “Romeo and Juliet” continue in November at the Broward Center in Fort Lauderdale and the Kravis Center in West Palm Beach.