Review: The Duality and Sexuality of ‘HOST’ 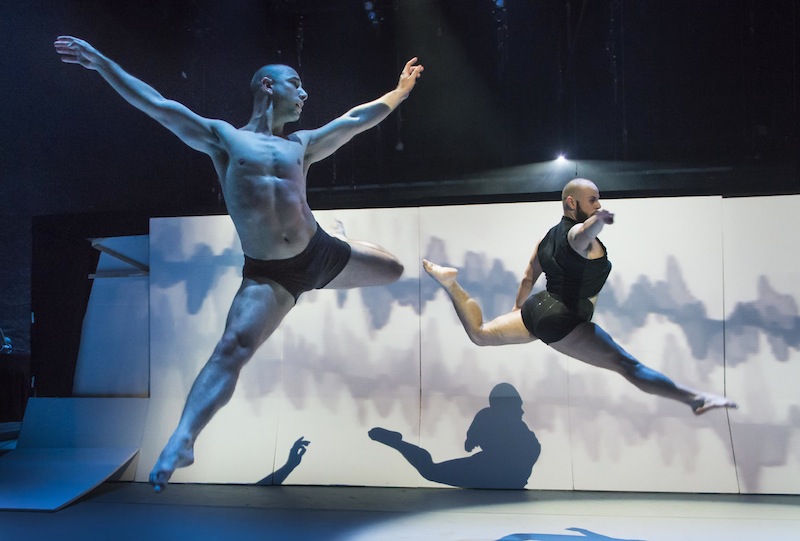 In HOST, the latest project by Pioneer Winter and Jared Sharon, two separate performances occurred. A simple, bare Styrofoam wall was constructed right down the middle of the stage in parallel to the audience. On any given night, audiences could see only one of the performances based on where they were sitting. The other was out of sight, visible only to the other half of the audience.

For its apparent simplicity, the wall created some rich dynamics. Most importantly, sound travelled easily across the wall even though sight was restricted. The result was a partial awareness of the other side, often a seemingly forbidden form of participation, like an audio voyeurism. Conceptually, the wall evoked a seedy motel or some other hook-up spot where sexuality can barely be kept private.

Vocalizations and audible strikes with each others’ bodies or the floor were built into the choreography. Nobody spoke, exactly, but they grunted, sang, clicked, among other amorphous communications. In many cases, the effect was some expression of manipulation, violence, or sexual ecstasy. Sometimes the meanings of the sounds were confused or mixed, depending on where one was sitting and what visual information was available. What sounds like orgasm from one side of the wall might be seen actually as a form of agony, with the performer writhing in isolation on the floor. Such play with perception and meaning was clearly deliberate.

The characters in HOST were fairly simplified “types” set in opposition or dynamic relationship to each other. On one side was a dominant/submissive pair, almost a caricature of manipulation and control. On the other side was a trio, including an insatiably affectionate pleasure seeker plus two others who connected and separated in various combinations. In this case, with an all-male cast, homosexuality was front and center. The sexual nature of the characters was foregrounded, as in much of Winter and Sharon’s work.

Overall the wall and its divisions metaphorically stood for separation between internal/external selves, private/public acts, and self/other. HOST implies that from any one position, literally or figuratively, it is almost impossible to know what lies outside or beyond.

Perhaps the most engaging aspect of HOST was the performers’ often unconventional physicality and the way each embodied movement. Dario Gonzales, the insatiable character on the trio side of the wall, is starkly thin. When he was stripped almost bare at the end of the show, he looked hungry and impoverished in all senses. On the duo side of the wall, Alberto Pena Jr. was the controlled. His dance training was evident in beautiful leaps and poses, but his slightly heavier body suggested a sense of insecurity or weakness that was exploited by the dominant character played by Winter. While neither Gonzales or Pena Jr. would appear oddly proportioned on the street, the dance stage is a place where nearly perfect bodies are more the norm (for better or worse). Winter used this to his advantage.

The performers physical eccentricities were paired with focused types of movement and vocalization to fully articulate each character type with some depth. Further, the movement did not feel artificial or forced, but rather as though each performer had internalized his character and was acting and moving from inside his role.

This may well be a product of the creative process Winter used to create HOST. He has said recently that he prefers not to use mimicry with dancers repeating set sequences. Instead, he has chosen to work more improvisationally, giving the performers loose instructions or physical challenges and allowing them to choose what that might look like. In the final product, each character has a way of moving that seems to belong only to him. Yet a high level of choreographic vision is evident in the way that all five characters, in the duo and trio, were integrated into a whole.