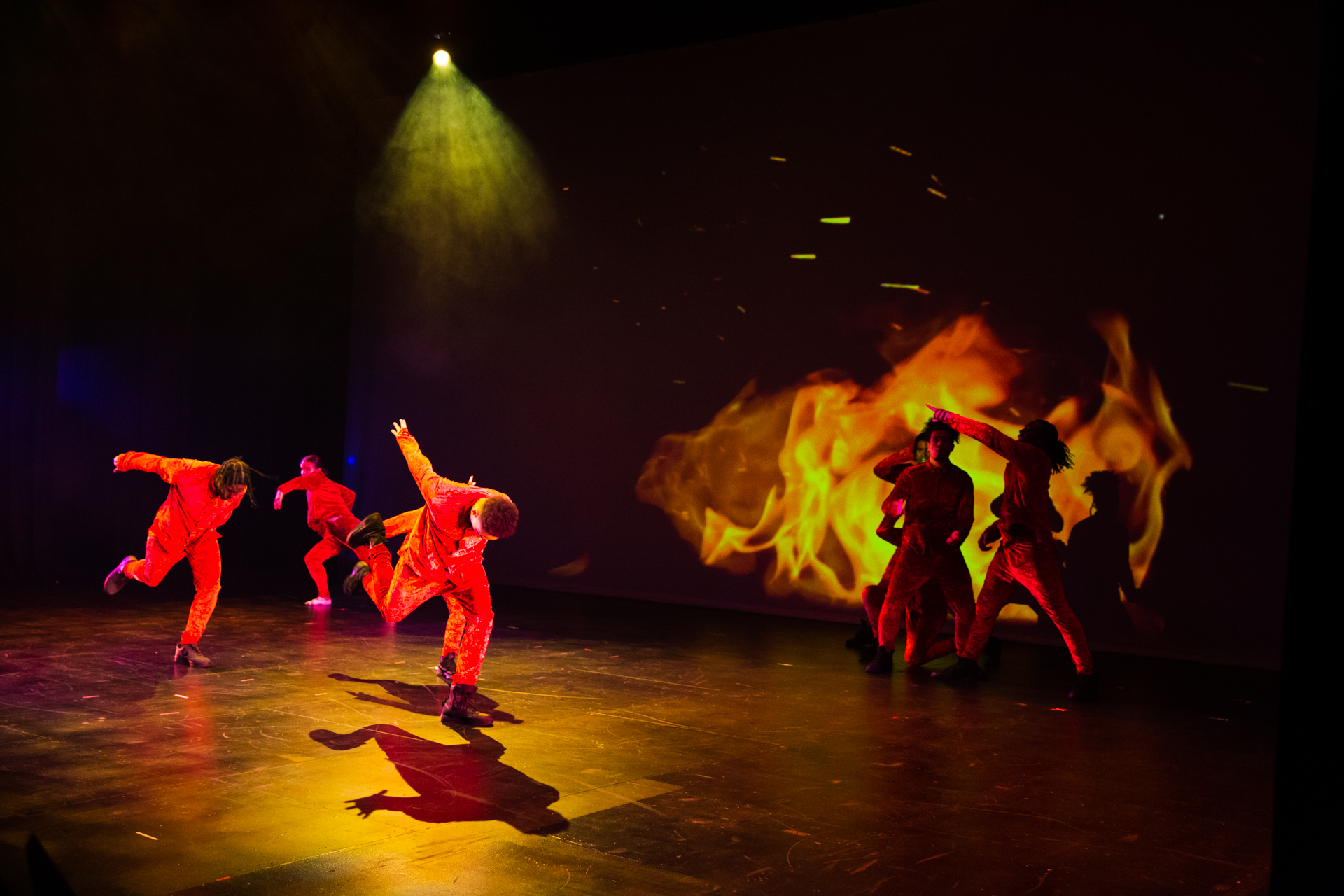 “Love Heals All Wounds” – the latest collaboration from South Florida’s Jon Boogz and Memphis-based Lil Buck – combined theater and poetry, dance and film to address issues of racism, police violence, mass incarceration and gender oppression in its Feb. 8 presentation at the Adrienne Arsht Center for the Performing Arts.

The program, at the Arsht’s intimate Carnival Studio Theater, offered an exciting and smart mix of street dance, spoken word and visual projections and extended the vocabulary of street dance to embrace activist narratives and social commentary.

It opened to a backdrop of pulsing stars, and Jon Boogz and Lil Buck stretched side by side on the floor as violinist Jason Yang spun out a mournful, adagio melody.

Boogz and Buck slowly stood while, at center stage, poet Robin Sanders – in a full-length, white-and-gold dress – chanted verses to the sound of flowing water.

“Hydrants spray water as brown as their skin,” Sanders chanted, introducing the theme of environmental racism.

In silky blue shirts, the two dancers sent waves rippling from shoulders to fingertips and back, while scenes flashed behind them showing hurricanes flooding city streets and citizens from low-income neighborhoods struggling to rebuild.

Five other dancers formed a pyramid around Boogz and Buck. The group cycled through patterns of snap pivots and re-directions, torsos rippling, arms and hands fluttering. Projected behind them, a man held high the sign, “Flint Lives Matter.” 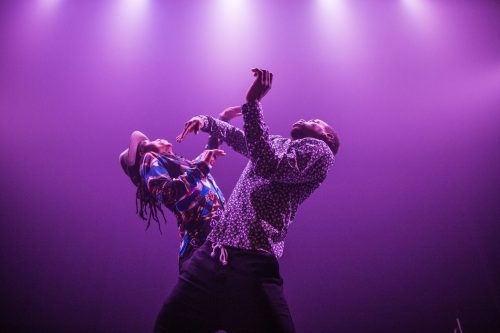 Then Sanders returned, and the group formed a tight line behind her. As they swayed gently, she asked the audience to “breathe deeply” and “inhale the stench of inequality,” marking the shift from water to the element of air.

Of the four opening vignettes featuring elements, “Fire” was especially effective.  As four dancers in red formed a cross on the floor, Sanders’ verses played with associations of fire to anger, with phrases such as “ashes of destruction,” before centering on a message of renewal, “I can tame them. I can restore them.”

With that, the four dancers stood and began a complicated sequence of moon walks, floating forward and to the sides as images of fires raging through Baltimore minority neighborhoods appeared on the screen behind them. The scene ended with the dancers huddling around the poet.

“Love Heals All Wounds” consistently resisted the temptation to soften the harsh social realities it framed. From vignette to vignette, talk of the power of unconditional love or faith in social progress consistently shifted to show the violent realities of structural racism for many African-Americans in the United States.

In one instance, Sanders introduced the next piece with the half-sung, half-chanted refrain, “Black boy, you bring so much joy,” as dancers in street clothes circled the floor, clapping and stomping. Forming a tight group at the front of the stage, they took turns rapping lines and snapping out athletic dance sequences.

As the audience joined in a call-and-response, the theater morphed into a neighborhood street corner. One dancer explained to the audience how he managed to add a twist to his flip.  Another riffed on Sanders’ opening lines, strutting to the center with, “Black boy, black joy, I’m talking about me.” The audience burst into applause.

The warmth and camaraderie of the scene vanished with the wail of police sirens. The dancers scattered as the vibe shifted instantly from joyful to dark.

This performance was followed by a brilliant examination of the contemporary crisis of mass incarceration and its roots in the history of American slavery.

“What’s going on?” questioned Sanders, as she opened the segment spinning out lyrics that forged potent links with the visuals.

As she spoke of “power as the new narcotic,” and being guilty “by simply breathing while being brown or black,” black-and-white images of chain gains and prison yards full of African-American men flashed on the screen.

Four dancers in prison suits stood at the center of blocks of light on the floor, crisscrossed with shadows reminiscent of prison bars. The men shed their shirts, framing startling choreographies that ran the gamut of the penal experience from the hammer strikes of forced labor to impacts received from beatings.

One dancer in street clothes bobbed and feinted like someone locked in argument, half pantomiming, half dancing. Exasperated, he raised arms in surrender, then kneeled and placed his hands behind his head as a voiceover described the meteoric rise of U.S. incarceration rates during the past 50 years.

It was the evening’s most powerful piece.