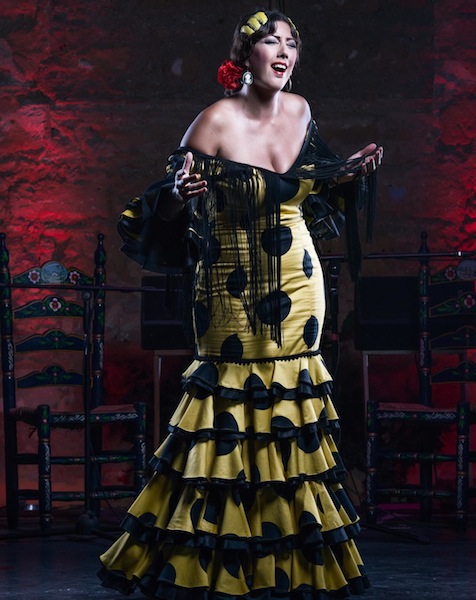 Siempre Flamenco’s Festival de Cante opened Friday, Sept. 2 at the Arsht Center’s Carnival Studio Theater to a small but generous audience, who responded warmly to singers Nano de Jerez, Miguel Lavi, and Sara Salado, all brought from Jerez, Spain for this, the 11th edition of the weekend-long festival.

The evening followed the format of most flamenco concerts, starting slowly with the heavy and tragic cante jondo (“deep song”) and gradually lightening into the buoyant cante chico, particularly emphasizing the bulerías rhythm that is so emblematic of Jerez.

While honest, traditional singing is the festival’s raison d’être, this year’s inclusion of three fine guitarists was a luxury seldom seen outside of Spain. Paco Fonta, Ángel Ruiz, and José Luis de la Paz are all Miami transplants who can be heard often on stages throughout the city. It was a special treat, however, to be able to appreciate them together in this setting.

De la Paz (formerly known as José Luis Rodríguez) accompanied singers with the calm and focus of a Zen master. It is fascinating to watch him watch the singers, subtly following their tonal shifts and adorning their phrases with lovely melodies as fine as the ornate plasterwork in a Moorish palace.

Ruiz, who like De la Paz has played for some of the preeminent dancers of our day, shone in the sound of his round, rich rasgueado, the strumming technique so characteristic of flamenco guitar. While his accompaniment of Miguel Lavi seemed somewhat tenuous, like mechanical gears that didn’t quite mesh, between the singer’s verses his playing was sure-footed and strong. Lavi sounded best when, alone center stage, he rapped out a rhythm with his knuckles on a small wooden table and reached back with his raspy voice, full of feeling, to flamenco’s early, pre-guitar origins.

Of the three singers it was Sara Salado who seemed most in form at Friday’s opening night performance.The 33 year old has an impressive command of her instrument, a voice that is at once well trained and emotionally expressive. Her style is firmly rooted in pre-Camarón de la Isla, pre-“nouveau flamenco” traditions. The way she takes flamenco back to basics is as comfortable as slipping into a favorite pair of old shoes. In her alegrías de Cádiz, she sings two-hundred year old verses as

naturally and with as much freshness as if they were written last week. When she stepped downstage into the footlights with her womanly figure and form-fitted costume, she looked like one of those 19-century singers Toulouse Lautrec delighted in drawing, and the texture of her voice was as rich as the deep blue velvet of her dress.

Dancers included Celia Clara, who performed a soleares accompanied by all three singers and guitarists. Dancer Raúl Ortega showed off his strong footwork in another alegrías de Cádiz,as well as an unfettered and somewhat unusual sense of humor. (Seeing a male dancer wave, sad clown style, to first one and then another audience member in the first row during a footwork solo was a first for me, but the crowd seemed to love it.)

Although he seemed somewhat hoarse at times, the audience was also delighted with veteran Nano de Jerez, who provided more comic relief with a bulerías replete with sight gags that highlighted his considerable charm and impeccable sense of rhythm. When he took off his pinstriped jacket to mime a bullfighter’s pass, the gentleman next to me remarked, “He just stole the show.”