“Stravinsky and Balanchine: A Monumental Collaboration” at the New World Center paid tribute to two giants of music and dance. (Photo courtesy of Alexander Iziliaev)

There was palpable excitement in the air as two giants – Miami City Ballet and New World Symphony – came together Jan. 31 for “A Monumental Collaboration.”

The program at Miami Beach’s New World Center was a fitting tribute to the artistic union of two other giants: composer Igor Stravinsky and choreographer George Balanchine.

“Stravinsky and Balanchine: A Monumental Collaboration” opened  with a video introduction by New World Symphony artistic director and conductor Michael Tilson Thomas and Miami City Ballet artistic director Lourdes Lopez. It drew parallels with Stravinsky and Balanchine’s collaboration and explained the personal connections that Thomas and Lopez had to the composer and choreographer.

The evening began with the ballet, “Apollo.” Stravinsky’s work first debuted in Washington, D.C., in 1928 with choreography by Adolph Bolm. When Sergei Diaghilev’s Ballets Russes dance company performed “Apollo” a few months later in Paris, it was paired with choreography by an emerging talent, the 24-year old George Balanchine. It became the first collaboration between Stravinsky and Balanchine.

As the theme expanded, it connected gorgeously with the violin solo rendered by New World Symphony fellow Kevin Chen. With the start of Chen’s solo, MCB’s Renan Cerdeiro entered in white tights and a draped tunic. At first tentative in his attack, Cerdeiro settled into the space and shaped a terrific “Apollo” who stretched and lunged, alternating between strict dance and miming the performance of the thaboura. 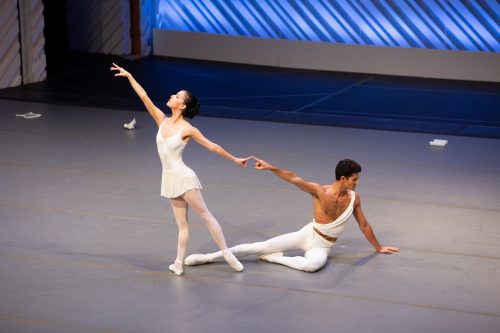 The prologue closed with the appearance of the muses: Emily Bromberg as Calliope (poetry), Jennifer Lauren as Polyhymnia (mime), and Katia Carranza as Terpsichore (dance and song). All three sparkled, both in their solo variations and together with Cerdeiro, whether performing a weave at the center or miming the horses of Apollo’s chariot. Carranza was especially memorable in the way she communicated the nuances of the orchestra’s phrasing with her upper body and the timing of her footwork.

Next up was “Circus Polka” (1942), which Balanchine originally choreographed as a dance for 50 elephants, commissioned by circus man P.T. Barnum.

Miami City Ballet performed this back in 2018, with 48 students acting as the elephants and Lopez assuming the role of ringmaster.

For “A Monumental Collaboration,” both the elephants and the students were replaced with sumptuous, thought-provoking visuals projected on the hall’s massive sails by Emily Eckstein.

“Circus Polka” opened with a chaotic tumbling of strings and, from there, the melody vaulted forward. Especially notable were the gorgeous, controlled bass tones in the baritone and trombone that alternated with the winds. The music remained tongue in cheek and danceable from start to finish, barreling through to a final thud.

The evening closed with Stravinsky’s “Violin Concerto in D Major” (1931). Stravinsky’s score stems from a collaboration in Paris between Stravinsky and violin virtuoso Samuel Dushkin. Balanchine had a choreography premiere at the 1972 Stravinsky Festival organized to recognize the composer’s death.

“Violin Concerto” starts with a toccata followed by two arias composed of a pas de deux danced by two couples; it ends with a capriccio for the entire cast. 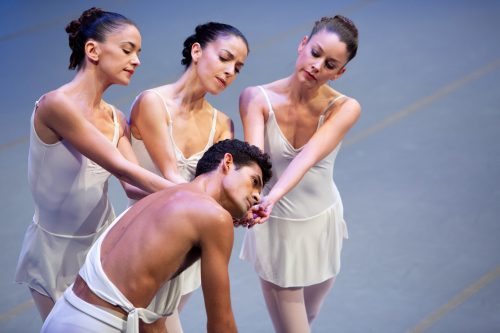 Each movement opens with a chord Stravinsky devised with Dushkin, which stretches from D to E to A6 and serves as an emotional thermometer for each of four movements. Violinist James Ehnes was brilliant in the opening toccata, cutting sharply through the opening repetitions of sixteenths and eighths that shuffled first between solo strings, winds and double reeds before being asserted again in increasingly dramatic combinations of voices.

In the first aria, soloists Kleber Rebello and Nathalia Arja powerfully channeled the shrill and otherworldly quality Ehnes laid down, as Rebello pilloried Arja at the center of the stage or pivoted her attitude from behind with the foot of her stretched leg on his throat.

The refrains of the chord in the second aria – danced by soloists Cameron Catazaro and Ashley Knox – shifted from shrill and threatening interruptions to a signal of the complicated emotions powering their pas de deux, as Ehnes developed an increasingly conversational quality with the orchestra.

While both soloists danced notably here, this was a breakout performance for Catazaro as he ate space and radiated theatricality in support of a distraught Knox, sweeping his arm over her shoulders, his hands over her eyes and, with the soloist’s final note, pulling her into a deep backbend.

In the final capriccio, Ehnes decorated the pulse of the orchestra with accents as the dancers skipped forward bent low, elbows covering their eyes. At the center, the two pairs of soloists circled each other in a Russian folk dance that closed the evening on a joyous note.

Most took to their feet as Thomas, Lopez and Ehnes joined the dancers onstage to receive the applause of an enthusiastic audience.