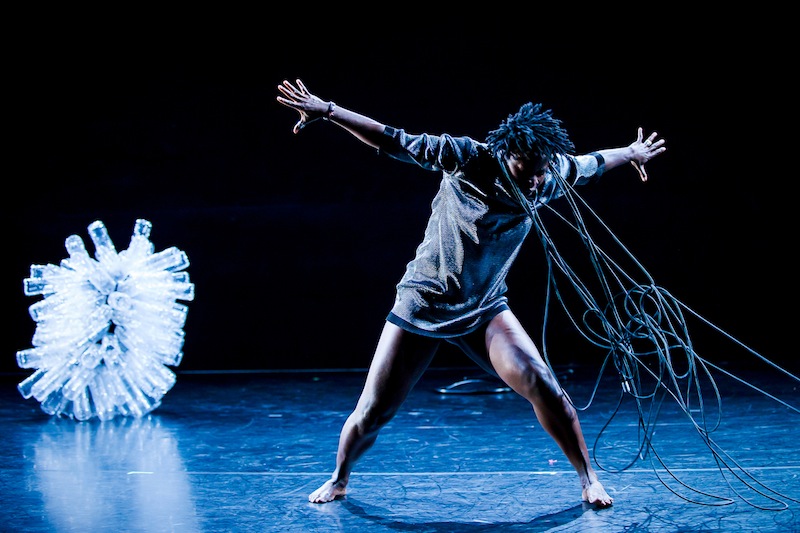 Tigertail’s Artistic Director Mary Luft has described Beugré’s work as electric. Quite an understatement, as it turned out. In her piece entitled “Free Territory,” Beugré managed to take the audience’s collective hand, push it hard into an electrical outlet and hold it to the current.

Welcome to her world: ancient agonies alongside indifference and despair; a confusion between diamonds and garbage, between voice and a bondage so deep it has no face. Dance is caught between pleasure and pain. The audience is asked to witness a destruction of the self, right out of a snuff film, and then asked what is that witness worth? Finally there’s a birth, a hatching — but of what? There is a farewell which might be a welcome, or as easily a suggestion of submission.

Using the entire back box as her stage, in a dance that alternated tableaus with extreme physicality and movement, Beugré brought her audience a performance so immediate it couldn’t be called performance at all, but rather a breathing documentary, a study of emotion. Beugré tells of an intruder (herself), one far beyond desperate, who is now at long last making a stand.

Part of the genius of the performance is, of course, her unequivocal reminder that her world is our world. Globalization has removed the refuge of innocence. And so Beugré stands within easy reach of an audience member as she chokes on the wires of a microphone that might have given her voice. On Saturday she stood there far too long. He didn’t blink. Neither did she. The audience was mesmerized and because of that somehow guilty. It took the guy so long to realize he could release Beugré that in the end it hardly mattered.

Her symbols, her metaphors are downright dizzying in their resonance. Not only was there the microphone, but Beugré uses curtains of empty water-bottles. Strung together they are dazzling, these discarded, thrown-away bottles become gorgeous. But at the same moment they tell a tale of pollution and materialism — “we have hit a wall” she said about this pollution that at the same time is salvation since those in the Ivory Coast must buy their water in order to live.

At one point she becomes the bottles. She hatches herself out of them. For a split second this reviewer remembered images of Josephine Baker’s banana skirt, but Beugré is eons beyond that as she tries to shake free of them, sometimes with the audience’s help.

Before she does, Beugré has sucked — she might as well have inhaled — an entire large plastic garbage bag. In the microphone segment she was perilously close to choking, here she is that close to suffocation. One can almost hear the entire audience whisper, “please don’t do this. Please don’t ask me to witness this.” Still, with her presence, no one can take his/her eyes away. This was the night Nadia Beugré danced for Miami, thanks to Tigertail.