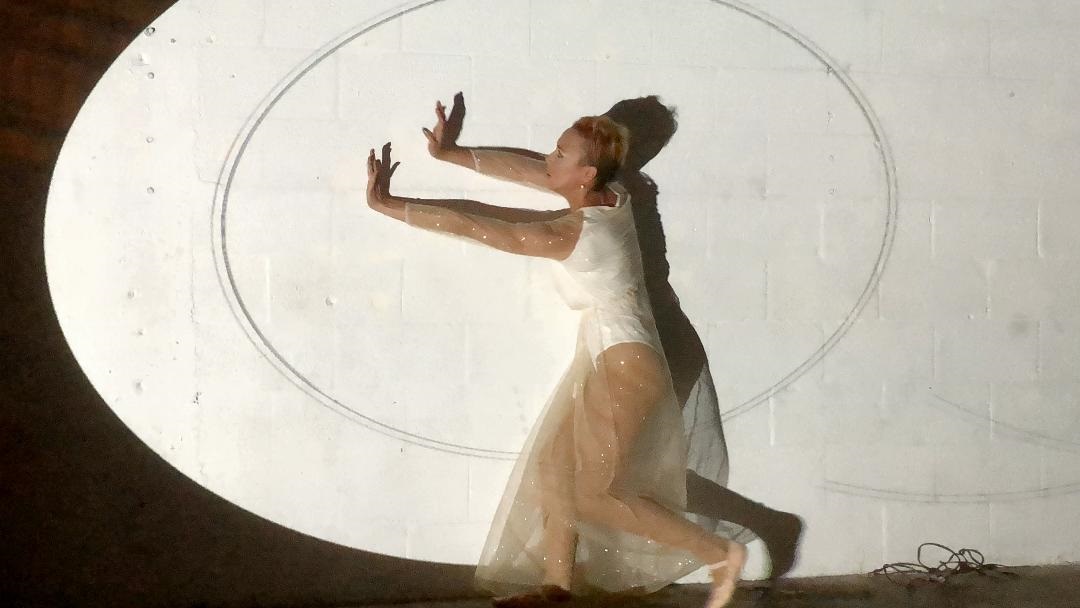 Question: What instrument was played as compellingly with metal pipe and violin bow?

Answer: industrial stool. And composer-performer Richard Vergez also skidded, rolled and bounced it around on the floor, conjuring uncanny expressiveness from this unlikely device.

The venue allows intrusive car sounds, but the casual atmosphere and free admission policy belie the originality, concentration and command of most presenters.

First up, and camouflaging much of the upcoming program, dancers Jenna Balfe and Nicole Salcedo blessed the space with a leisurely processional – while bearing leafy vines. Their measured movements, accompanied by Monica Uszerowicz’ poetry, evoked delicate beauty.

Next: psychodrama! Lorene Bouboushian threw herself on the mercy of a volunteer who daring performed – under instruction – intrusive purging of the artist’s memories of her mother’s effacement within the family. Rafa Vargas Bernard, newly arrived from Puerto Rico, mined similar material, inviting volunteers to expel their demons by writing on slips of paper, screaming and giving them to Bernard to swallow!

Nearly 20 hours of spectacularly diverse “acts” co-mingled in relative harmony. Among other highlights:

David Rohn is known for his photographic and theatrical character studies. Sporting a mortarboard, Groucho-like nose and mustache, he impersonated a stick-wielding instructor of the “Three Rs,” to comically critique vampire capitalism, environmental ravages and rabid politics.

In a similar tone, Randy Burman reconfigured his shtick of paper shredding to produce a Broadway-like MAGA rally. It featured the traditional fanfare of military music, flags and enthusiastically strutting dancers, but these “faithful” sported brown shirts, red “Lies are Truth” hats and sinister armbands. And Burman – center stage – fed paper banners reading “Reverence,” Respect,” “Justice,” “Public Education,” “Honesty” and other endangered values into a clear plastic shredder. Get it?

In selecting artists, “Originality is primal,” Oquet said in a recent interview. “Second is their capacity to perform. Is it believable? Do you see the artist in there? How do they use the elements and keep your attention?” Most of these artists ranked high by every measure; some truly excelled.

Electronic sounds were voice-driven, activated by dials, switches and patch cords or – as mysteriously performed by a costumed, caped and red-lit Juraj Kosj – by motion-sensors. Kosj also took advantage of the venue’s corridor proportions to create a shimmering river of undulating Mylar curtains.

Another haunting installation featured Claudio Marcotulli’s videography, combining web-like cones of netting with scrim, a duo of dancers and multi-hued immersive projections. It powerfully generated moods of entrapment, yearning and liberation. One M/P “regular,” Fsik Huvnx, who has traveled to the DR with Oquet – enveloped his rapt audience with mesmerizing waves of bowed guitar-based harmonics.

Ecstasy also arose from dueling arrays of synthesizers – sometimes accompanied by such arcane devices as bass, guitar or drums. Pocket of Lollipops, UOM and Chris Rey made the link to Churchill’s bar (itself a hothouse for nurturing regional talents). There was also welcome audience and performer overlap with the recent Subtropics Marathon.

Bobb Hart’s fishnet costume seemed an affectation until he grabbed his saxophone and wailed with the passion of Roland Kirk in a 1960s New York jazz club. Floor mounted processors generated multiples of Hart’s sound, as he crawled, posed and screamed before his giant projected twin image.

Elvin Diaz’s act was deceptively simple. He slithered through the “sphincter” of a six-foot-diameter balloon, briefly resided within, then exited through the same orifice. It required delicate execution, but more significantly, evoked a multitude of transformative physical and emotional states – mirroring the festival.

Besides Oquet, who emceed the marathon and performed an alternatively explosive and meditative shamanistic ritual, kudos are due to electronic punk musicians Greg and Eddy Alvarez (Jellyfish Brothers). Greg’s multi-layered, but un-muddled synth sounds were standouts, and the brothers’ technical assistance kept the festival on its tracks.

Dance NOW! Miami and Limón Dance Company together in hi...

Choreographer Claudi Schreier's "The Source" is her second work for Miami City Ballet and the main attraction of the last program of the company's season.
Continue Reading