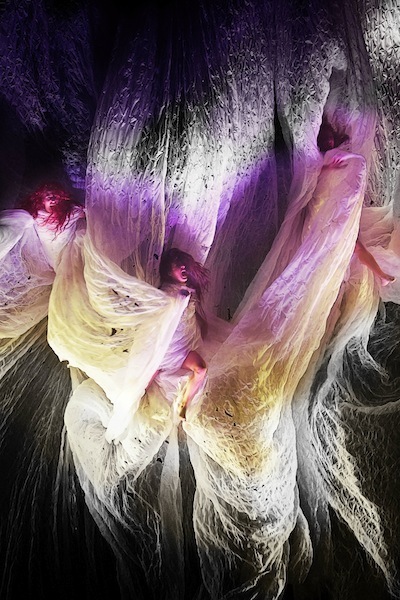 This past weekend, H2Ombre opened in Miami with a literal splash. Developed first for the Arsht Center, and soon to tour internationally, H2Ombre is an immersive multi-media spectacle that brings audiences right in, around, and underneath the action. Light summer fare for everybody, it is fun to watch and easy to like.

The Arsht Center team was heavily involved in the realization of H2Ombre, co-producing the performance with Pinchon Baldinu and Gabriella Baldini. Both Baldinu and Baldini were founding members of De La Guarda, an Argentine theatrical group whose in-your-face performances debuted to the world in the late 1990s. More recent De La Guarda performances include Villa Villa and Fuerza Bruta. While clearly drawing from De La Guarda’s performance playbook, H2Ombre does offer up high entertainment value.

H2Ombre is not shy about creative use of space. Audiences don’t enter through the usual lobby doors, but through the Ziff Ballet Opera House’s loading dock. Inside, a dark entryway leads to a transformed performance arena. The show kicks off loudly, and walls become floors while the air above the audience becomes an extension of the stage. Performers pop out unexpectedly, fly across the room on cables, and land in the middle of the audience.

Water, of course, plays a central role. The storyline theoretically revolves around the creative process, an artist’s battle with him or herself, or the struggle to bring an idea into reality. But this is just an excuse to spray water all over the theater, more than 6,000 gallons of it, and fill the room with high-tech eye candy including huge inflatable monsters. The multi-level performance is backed by loud electronica, something like a video game soundtrack or music in a club night. And the pace never lets up. As soon as you’ve oriented yourself within one full-impact scene, another takes its place.

The general audience gets the most exciting view. As in the Arsht’s 2012 production of The Donkey Show, the divide between audience and performers gets erased and the audience is literally inside the show. Dress to get soaked (and skip the mascara unless it’s waterproof). For those who would rather watch from afar, a reserved seating area with VIP tables is set back from the main floor. If standing is a hardship, or you’re planning to wear fabulous delicate shoes, go for it. But this is not the best seat in the house.

The fantastical flash of a show is followed by an after-party. A swank bar area to match the high-tech props has been set up for the audience to extend their post-show buzz a little longer, while local DJs keep the soundtrack going. It isn’t the usual stand-up-and-leave kind of ending, and people of every age can stay and circulate before heading home.

H2Ombre will be running through August, giving Miami audiences plenty of time to get wet and enjoy the show.