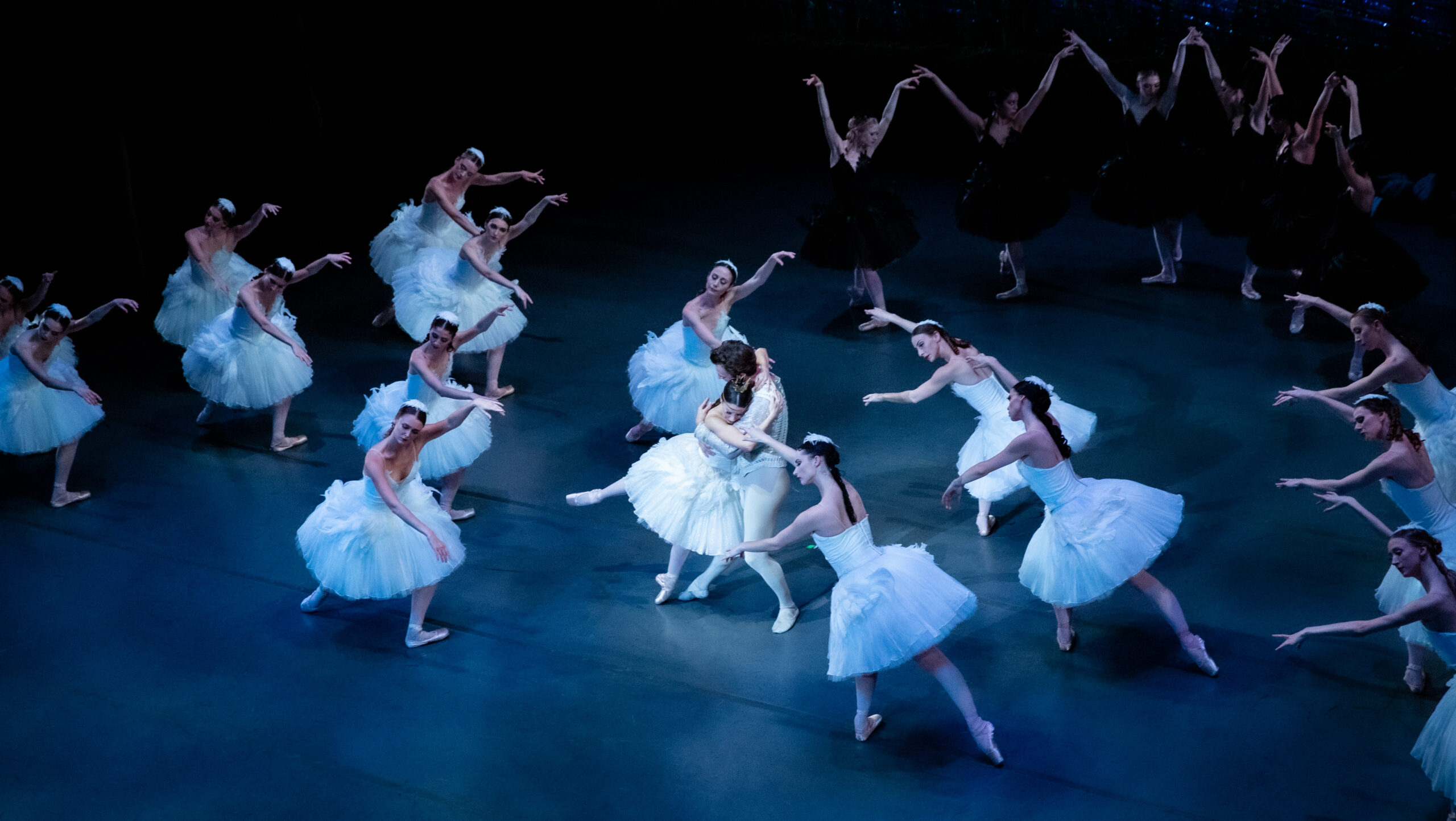 A few decades back, controversy erupted around restoration work on a famous Italian chapel. Some disliked the new striking and vibrant hues, preferring the familiar, softer colors, and found the restored sections jarring. A number even asked whether the project should continue.

Judging by the standing ovations from the packed house during Friday evening and Saturday and Sunday matinee performances, the South Florida audience appeared to have the opposite reaction — enthusiastically welcoming this vibrant, “restored” version, notable for its clarity of structure, its gorgeous music, scenery and costuming, its elite-level performances, and above all, its presentation of a very human story where virtuous and vicious characters brim with both strengths and frailties.

The three-act ballet tells the story of a woman named Odette who is enchanted by the “evil genius” Von Rothbart. By day, Odette and her court become swans. At night, they return to human form. The spell can only be broken by Prince Siegfried, but Von Rothbart tricks him into pledging himself to an Odette doppelganger – the “Black Swan” Odile – and Odette’s chance for freedom is lost. Odette and Siegfried then drown themselves, breaking the enchantment and freeing their love for the next life.

Miami City Ballet dancers in a grand scene from Act I of “Swan Lake” at the Arsht Center for the Performing Arts. (Photo/Alexander Iziliaev)

Ratmansky’s new interpretation depends on his study of the original 1895 production as preserved in Stepanov notation (a shorthand for writing down dance movements). It removes features that define later versions of the Petipa/Ivanov classic, which may be jarring to those audiences who know and love them.

But there are clear advantages to Ratmansky’s “restored” version. For example, dancer Cameron Catazaro performed a wonderfully theatrical Von Rothbart throughout the weekend opening – portraying this balletic bad guy not as an otherworldly genie but as an “evil genius” who is completely human. Although he’s still vicious, Catazaro played up the sorcerer’s comic side as well when he coached Odile on how best to manipulate the young prince during the Act II pas de deux. In a series of gorgeously pantomimed exchanges with Odette, we learn Von Rothbart possesses weaknesses she exploits to resist and, finally, defeat him.

Also, thankfully, Ratmansky’s “Swan Lake’ removes the Jester – a high-octane virtuosic role for a male principal – to immediate positive effect. Act I, Scene 1 traditionally has the Jester making moves on the girl in the yellow dress during the opening pas de trois, and his actions distort her delicate sequences as she shoos him off. The absence of this character cleared space for both Samantha Hope Galler on Friday and Sunday and Ellen Grocki on Saturday to shine as they hopped and circled en pointe. 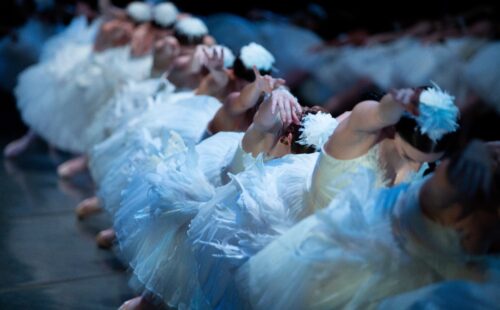 Ratmansky drains a lot of the “swanness” from this “Swan Lake,” and it’s a good thing.  According to the libretto’s logic, audiences never see Odette as a swan, since she only appears in dance sequences during night scenes. And yet, most versions have Odette incessantly flapping her arms.

Ratmansky has taken this out, freeing Jennifer Lauren to display masterful upper body nuance in the role of Odette on Saturday and Sunday. With less energy poured into flapping her arms, Lauren forged a bond with Rainer Krenstetter (as Siegfried) with the tilt of her chin or by subtly opening and closing the space between neck and shoulder.

A Ratmansky addition to Act I is the role of Siegfried’s best friend, Benno, who acts as a second partner (with Siegfried) to Odette during the Scene 2’s “Adagio.” Dancer Damian Zamorano was a weekend highlight both in the role of Benno and as the male dancer in the opening pas de trois.

When Benno supports Odette through a pivoted penchée, he gives Siegfried the space to admire her – and their relationship showcases trust and affection between men as Siegfried’s no-drama wingman. Zamorano cued this by placing a hand over his chest and lowering his gaze to show his respect for the couple, another example of the exquisitely pantomimed sequences the Ratmansky version includes.

Another important difference evident in the Ratmansky remake is the character of Odile, whose Act II seduction of Prince Siegfried crushes Odette’s chance for freedom from the spell. Far from Natalie Portman’s black-costumed swan featured in the 2010 film, Ratmansky’s Odile wears a dress layered in plum, teal and sparkly black tulle with a black and emerald-green bodice. This Odile is no swan, but rather a twisted, self-centered human.

Replacing an injured Nathalia Arja on Friday, principal Katia Carranza performed an Odile that was an equal partner to Von Rothbart’s viciousness in her Act II pas de deux with Prince Siegfried (performed on Friday by Renan Cerdeiro). The role of Odile takes balletic technique beyond the limits of the traditionally correct, and Carranza captured this in deliberately exaggerated backbends or sharp turns in attitude that projected power as Von Rothbart looked on from the throne, casually stroking his red beard.

Notable as well on Friday was Cerdeiro’s variation, in which he exhibited clearly defined beats of his feet and legs snapping in sailing cabrioles, landing in solidly planted arabesque.

Jerome Kaplan’s costuming and scenery presented detailed mountain landscapes and a palette of pastel fabrics accented with bright splashes of ribbon and flower baskets for the peasant dances of Act I, lovely ankle-length gowns with waist-length open sleeves for the fiancees of Act III, not to mention the lemony skirts and bodices trimmed in mint blue for the Neapolitan dancers.

Following a straight-forward romantic agenda, “Swan Lake” is a musical vehicle for connecting the audience with love of freedom as a transcendent passion. As such, Pyotr Tchaikovsky’s 1877 score teams with quotations from Richard Wagner’s “Lohengrin” and “Tristan and Isolde.” Tchaikovsky even took heat from critics for the ballet’s operatic tone.

For the 1895 ballet, composer Riccardo Drigo drastically re-arranged the Tchaikovsky score, but its operatic flavor remains, making for demanding music. 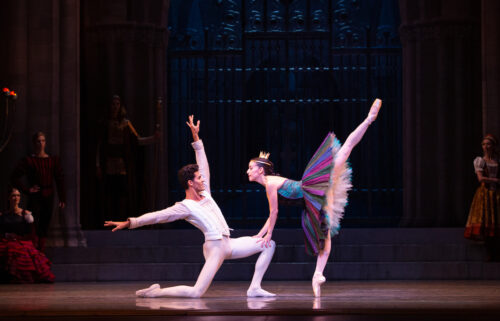 Ratmansky’s adaptation does not change all of the known features of the original. However, in MCB’s “Swan Lake” premiere, neither Carranza nor Lauren went beyond 27 fouettés for Odile’s dance in the coda. Odile’s 32 fouettés were a feature specifically written into the 1895 Ivanov/Petipa “Swan Lake” premiere for Italian sensation Pierina Legnani, who had previously executed 32 fouettés in the 1893 premiere of “Cinderella.”

Ratmansky himself has emphasized the importance of this bravura step for the restored version, so it was unclear why the ballerinas didn’t do them (though concern over injuries may be a culprit here, with the company announcing the sidelining of principals Carranza and Arja).

A special guest artist, Boston Ballet principal Viktorina Kapitonova, was invited to perform the Feb. 19-20 evening performances at the Kravis Center for the Performing Arts in West Palm Beach. Ratmansky personally selected and coached the acclaimed Russian dancer, who originated the role of Odette/Odile at Ballet Zürich, when the new version had its European premiere in 2016.

Six years in the making, and a pandemic later, this “Swan Lake” shows that much commitment and obvious care went into bringing the revamped classic to South Florida stages.

The remaining performances of Alexei Ratmansky’s “Swan Lake” are in Broward and Palm Beach counties. Catch it Feb. 19-20 at the Kravis Center for the Performing Arts, 701 Okeechobee Blvd., West Palm Beach; and Feb. 26-27 at the Broward Center for the Performing Arts, 201 SW Fifth Ave., Fort Lauderdale. Tickets start at $37 and are available via miamicityballet.org/swan. For safety protocols, visit kravis.org/healthsafety or  browardcenter.org/visit/health-safety-guidelines.