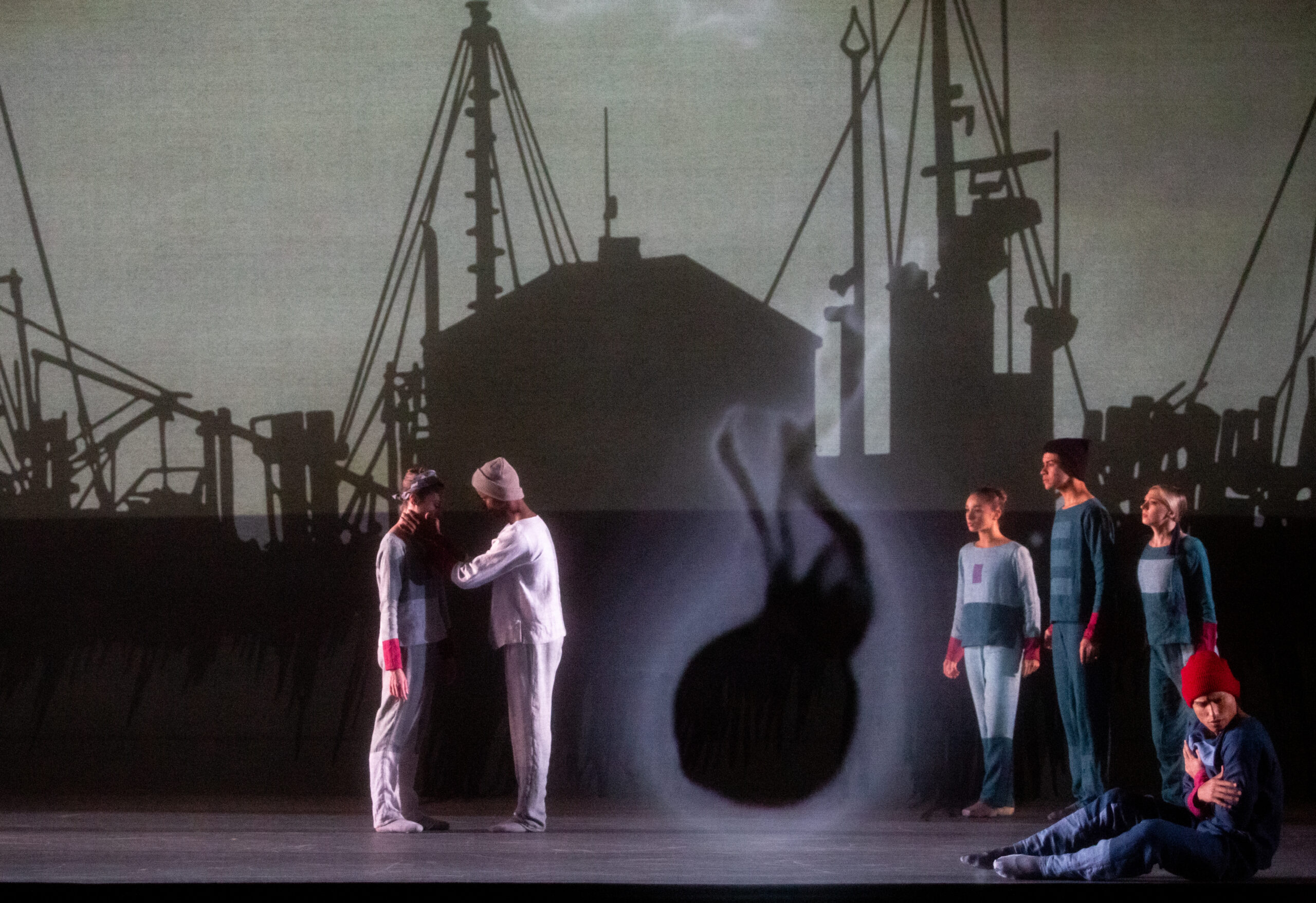 Miami City Ballet dancers in Claudia Schreier’s world premiere of “The Source,” one of the works featured in the company’s season closer, “Prodigal Son.” (Photo courtesy of Alexander Iziliaev)

MCB performed “Prodigal Son” in West Palm Beach at the end of April and in Miami, Friday, May 6 through Sunday, May 8. The final performances are in Fort Lauderdale at the Broward Center for the Performing Arts Center on Saturday, May 21 and Sunday, May 22.

Film plays a key role in “The Source.” Schreier’s partner and filmmaker, Adam Barish, as well as projection effects designer, Alex Basco Koch, deserve credit for the seamless way the visual effects and dance sequences combined to narrate a story of healing. 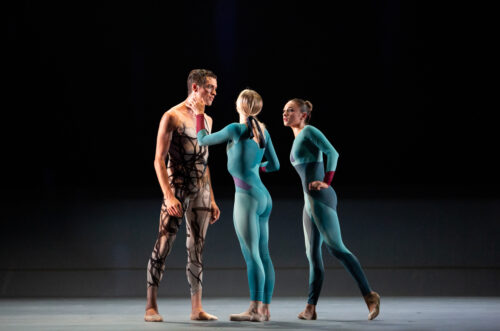 The action started with an oppressing scene of a port at sunrise.  Dancers in oversized shirts and pants in shades of gray plodded across the stage, heads down, occasionally stumbling or erupting in fights.  Occasionally, a viral-like streak streamed down the front scrim.  Many dancers held hands or fists on their chests as if in pain.

The narrative then transitioned from the oppressive opening to an encounter with a group of beings in white that revitalized them.  The piece ended back at the port with dancers interacting in an atmosphere of warmth and hope.

Applause from the Miami audience on both Friday and Sunday indicated that the work’s message of grief and healing came through across the stage.

However, “The Source” suffered some weaknesses.  These included an overly simplified dance vocabulary and the randomness of some scenic and video elements.  For instance, it wasn’t clear why the action opened and closed at a port, or the significance of the repeated sun images.  Ambiguities such as these distracted from the work’s straight-forward message of healing and hope. 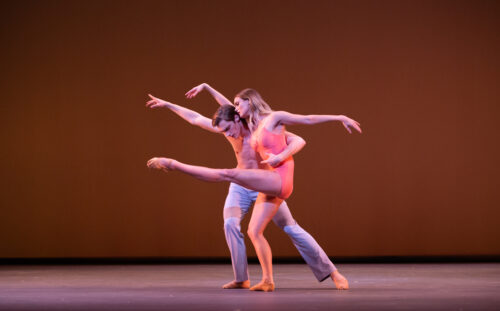 The work’s gorgeous lifts and quirky contortions communicate emotional intimacy through physical vulnerability as when the woman holds a full backbend as her partner rotates her or when she stands on his bent leg, leaning forward, sweeping her arms as if flying.

Opposite in mood and approach was the company premiere of William Forsyth’s, “Herman Schmerman.”  With a title borrowed from the 1982 Steve Martin comedy, “Dead Men Don’t Wear Plaid,” Forsyth famously stated the ballet “meant nothing,”

The ballet may “mean nothing” but what’s important is what it “does.”  It mocks gender distinctions in ballet mercilessly. It gestures to how ballet as an artform is a training for gender, where differently trained male and female bodies are disciplined to fulfill expectations audiences have around gender stereotypes. 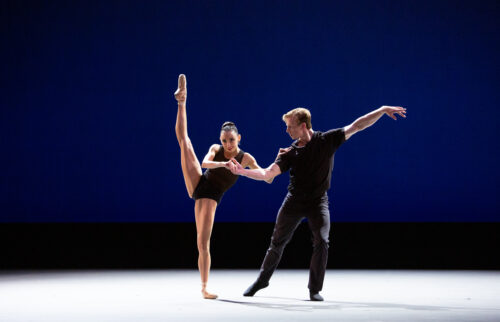 To a Thom Willems’ electro-funk score with a distinctly “Blade Runner” vibe, the two couples –Nathalia Arja and Chase Swatosh on Friday and Adrienne Carter (just promoted to soloist) and Steven Loch on Sunday – performed their roles powerfully with Swatosh turning in a stand-out performance.

The pas de deux begins with the male dancer struggling to support his haughty partner whose classical sequences demand his entire investment, blocking him from dancing.  The frustration communicated by both Swatosh and Loch was tangible.

Both female and male dancers executed a quick costume change and returned sporting yellow pleated Versace skirts.   The male dancer executed wild sequences and the rawness of his movements noticeably distracted his partner from her sequences.

When he again agreed to support her, he no longer offered the sculpted expertise expected from a classical male lead. She had to work within the forms of support he was willing to offer. 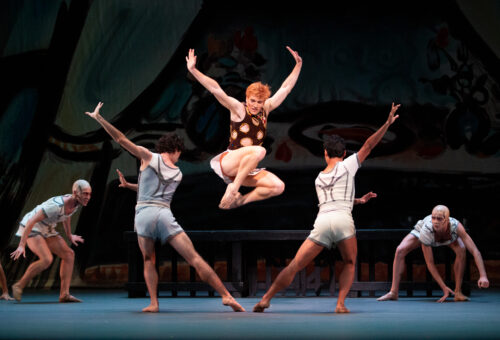 The ballet opened in a Georges Rouault designed Middle Eastern landscape with servants collecting the son’s inheritance.  The Prodigal – danced on Friday by Alexander Peters and Shimon Ito on Sunday – entered the scene ready to bolt, beating his knees, lunging to all sides with a great mimed yell before abandoning home despite the entreaties of sisters and father (performed by Cameron Catazaro).

The scene shifted to the tent of the Siren where ape-like servants, costumed in white with skeletal accents, paraded across the stage.

Their antics set up the entrance of the Siren – performed on Friday by Dawn Atkins (just promoted to principal soloist) and on Sunday by Adrienne Carter.

MCB’s season finale was worth seeing twice just to take in two very different takes on the Siren role with Atkins imperiously dominating Peters and Carter emphasizing the role’s carnality in her seduction of Ito.

If “The Source” suffered at points from narrative ambiguity, “Prodigal Son” presented few interpretive options.   Still, the dancers generated dramatic tension so skillfully that we were left in suspense to the ballet’s final moment whether the father would, in fact, take his errant son back.