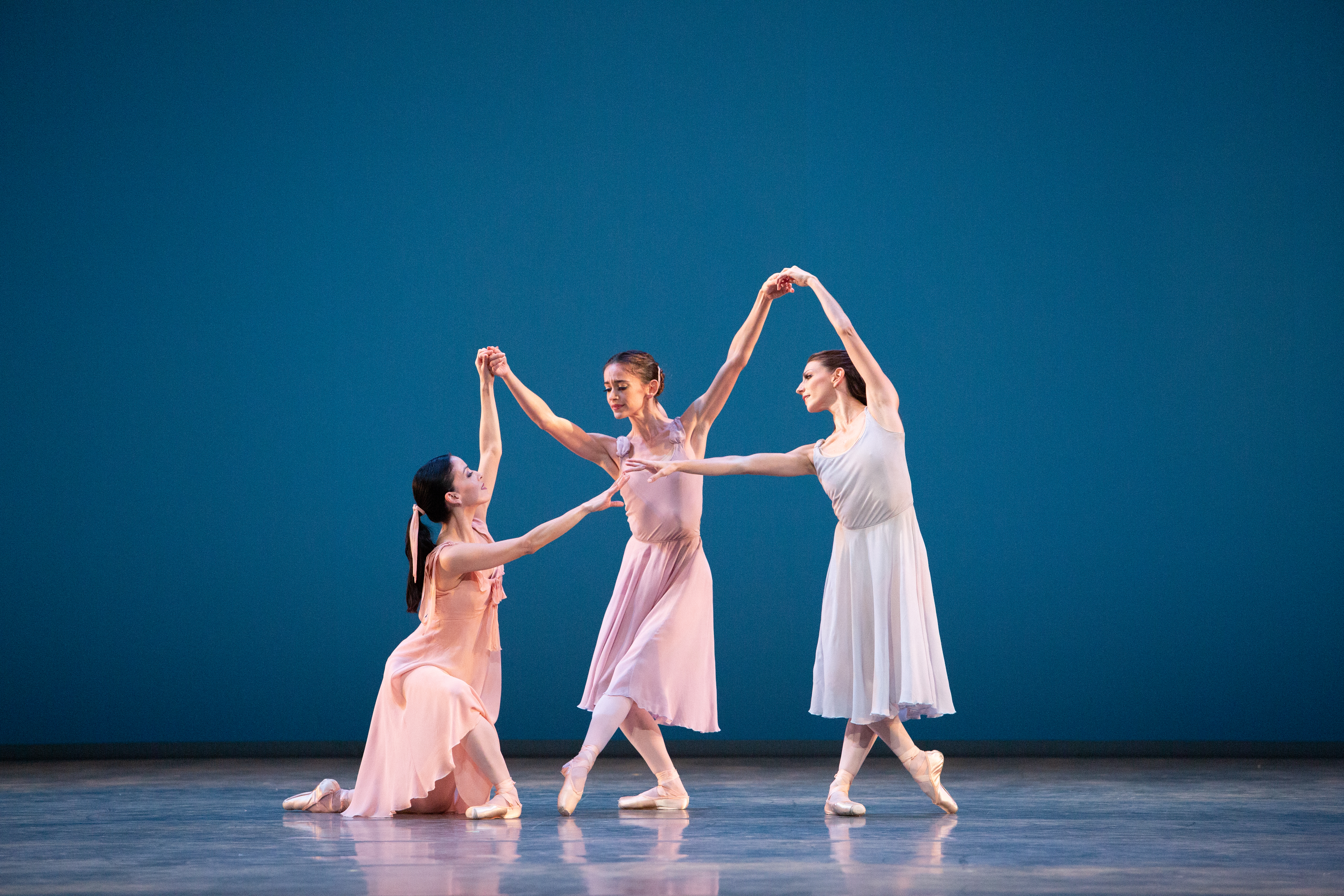 Miami City Ballet’s Program II opened Jan. 11-13 at the Adrienne Arsht Center for the Performing Arts with Jerome Robbins’ “Dances at a Gathering” and the Miami premiere of the 1984 Twyla Tharp-Jerome Robbins collaboration “Brahms/Handel.”

“Dances at a Gathering” is an hour-long masterwork Robbins composed after a decade-long hiatus from ballet. Based on the works of Chopin, the 14 dances explore the performative dimension of memory. The costuming and sets are simple, with loose-fitting dresses for the women, and tights, boots and blousy shirts for the men, with each dancer identified by the colors of their costumes. (Miami City Ballet will also perform the program Jan. 18-20 at the Kravis Center in West Palm Beach and Jan. 26-27 at the Broward Center in Fort Lauderdale.)

From the opening, the work invoked the theme of memory. A solitary Penteado in brown tights and white shirt walked out in silence onto an empty stage with aquamarine backdrop. With the first measures of Chopin’s mazurka (op. 63, no. 3), Penteado’s hesitant movements suggested someone returning to a once-familiar place as he moved in time with the waltz, hands on hip. The piece was notable for the simplicity of its sequences. For instance, from a pirouette, Penteado’s legs scissored in cabriole or slowly circled the stage with jetés, replacing the quick turn before the jump with a set of shuffling steps. The effect was of a dancer marking his steps, dancing more for himself than for an audience while he recalled former movements through a once-familiar space.

Danced to Chopin’s “Grande Valse Brillante” (op. 34, no 2), the sixth vignette performed by Bromberg (Mauve), Carranza (Pink) and Knox (Blue) was extraordinary. Also known as “the three sisters dance,” the sequence played brilliantly on memory’s special power to create concealed subjective spaces that remain hidden even to those with whom we are closest.

The vignette began with Knox and Bromberg, arms behind each other’s backs, watching as Carranza stepped forward en pointe, leg raised high in forward arabesque then swung back into attitude. She then took Knox for a spin to the waltz rhythm as Bromberg began her own performance sequencing many of the steps just danced by Carranza while Carranza and Knox looked away.

The same passage recurred later when Renan Cerdeiro (Green) entered and briefly partnered with Bromberg, pivoting with her to the 3/4 time through a succession of lifts as the other two women looked off. The sequence created the impression that Bromberg was lost in her own world, viscerally experiencing a former love.

The Miami premiere of “Brahms/Handel” followed. Since Miami City Ballet is the only company outside of New York City Ballet with the rights to perform the piece, one can hope this brainchild of a 1984 collaboration between Robbins and Tharp will show up in frequent future MCB programs.

The two choreographers divided the ballet’s 28 dancers into two teams costumed in simply squisito shades of green (Tharp) and blue (Robbins). For all three performances, the principal dancers shone. On Friday and Saturday, Jennifer Lauren and Kleber Rebello led the Blues, while Nathalia Arja and Alexander Peters led the Greens. On Sunday, Knox and Cerdeiro as principal Blues and Arja and Penteado as principal Greens turned in equally strong performances.

The ballet displays a complexity that takes its bearings from the music, Brahms’ “Variations and Fugue on a Theme by Handel” (op. 24). The Brahms piece sources its principal theme from the third movement of Handel’s “Suite No. 1 in B-flat major” (HWV 434). Handel set out five variations during the movement that Brahms then carried forward in 25 further variations ending with a fugue.

Just as an echo becomes more diffuse the further it distances from the initiating event, the Robbins-Tharp ballet grew increasingly complex as it progressed through Brahms’ reflections on Handel. One of the delights of the piece was to see these two very different choreographers frequently riffing on the other’s sequences. Although the sequences of the principals were interesting, often the most exciting exchanges occurred among the corps, with the women during the later variations being frequently floated in arabesque, cartwheeled through lifts or launched from one group of men to the other.

For instance, variation nine opened with the slow repetition of hard staccato chords. As the 14 blues took a knee, the stage crowded with greens. Arja entered standing on the shoulders of the men before falling forward full-body into the arms of four greens waiting beneath. Without skipping a beat, they turned her head over heels then seesawed her legs before lifting her by one leg as Arja’s other stretched back in an attitude. Wild!