“The Nutcracker” is a holiday tradition every year. But Miami City Ballet’s presentations this year are even more meaningful — representing, for many in the audience, a return to live dance since the onset of the pandemic.

MCB opened its holiday run of “George Balanchine’s The Nutcracker” on Dec. 10-12, 2021, at the Broward Center for the Performing Arts in Fort Lauderdale, with a roster of 54, including 16 new dancers. The Friday, Saturday and Sunday performances showcased a company with considerable depth of talent.

Each also featured gorgeous music performed by the Opus One Orchestra, under director and principal conductor Gary Sheldon on Friday and Saturday and guest conductor Laura Joella on Sunday, plus terrific violin solos by concertmaster Mei Mei Luo.

The late Isabel Toledo, celebrated woman’s bespoke designer, and her husband, artist and illustrator Ruben Toledo, revamped MCB’s “Nutcracker” in 2017, and their magic appears throughout the production, with costumes sporting eye-popping combinations of fabrics.  Wendall Harrington’s projections and John Hall’s lighting imbued traditional scenic elements with an otherworldly feel, as when the Christmas tree swells to titanic proportions.

Balanchine divided the ballet in two acts and fashioned it with roles for the entire company, from students to professionals. One benefit of so many stagings is that audiences often see dancers in unexpected roles, like corps dancers performing lead parts usually reserved for soloists or principals. This was the case for the Broward performances this year, with happy results.

The first act opened with a holiday party at the house of Dr. and Mrs. Stahlbaum, where guests have gathered including Herr Drosselmeier (performed by Reyneris Reyes). The watchmaker and inventor came bearing gifts: marvelous automated toys that dance for the children. Playing the toys, dancers Mayumi Enokibara as Columbine and Shimon Ito as the Toy Soldier best crafted the illusion of mechanical life — Enokibara hopping in arabesque and Ito spinning in double tours. 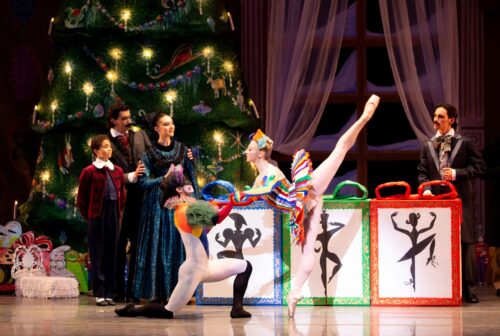 Drosselmeier also brought along his nephew (wonderfully performed all weekend by Dominick Scherer, in his ninth year with the production) and a traditional Nutcracker doll, both of whom captivate the Stahlbaums’ daughter, Marie (the radiant Allegra Dacquino Richerson).

When the partygoers dispersed, Marie fell asleep with her Nutcracker doll beside the Christmas tree, later awakening to the legions of the seven-headed Mouse King (Cameron Catazaro) infesting the house. Act II closed with her organizing the Nutcracker and toy soldiers to battle the mouse army.

Marie first had to travel through a wintry landscape on her way to the Land of the Sweets. To the first chirps of the piccolo, dancer Ellen Grocki rushed to the center, snapped en pointe, then rushed off followed by Enokibara, Matilda Solis and Taylor Naturkas. In the “Waltz of the Snowflakes,” 16 dancers crisscrossed the stage in ¾ time, pounded by a paper blizzard. One sequence had several dancers rushing toward the center, then leaping, snapping their legs and pivoting still in the air, speeding off in a new direction when they hit the ground, imitating the play of snow in the wind.

In Act II, Marie found herself now a princess escorted by her Nutcracker doll-turned-prince (Scherer) in a land teeming with sweets and cakes. Ruben Toledo’s tongue-in-cheek touches were everywhere, including lime slices framing a pineapple crown and 30-foot ice cream people painted on the leg curtains draping the stage. This transition set up a series of dances by the citizens of the realm ruled by the Sugar Plum Fairy. 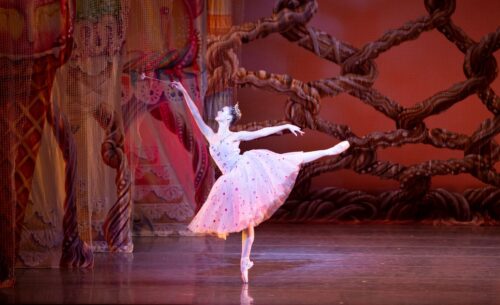 First up was the dance of Chocolate. Lead Chocolates — Nicole Stalker and Damian Zamorano on Friday and Sunday and Adrienne Carter and Francisco Schilereff on Saturday — snapped in attitude and sailed in saut de basque with equally high energy. The dark brown velvet coats and bodices of the dancers represent a Toledo winner here.

For the sinuous dance of Coffee, the Saturday night performance by MCB newcomer Hannah Fischer was spectacular, combining contortionism with impressive theatricality.

Both Ito and MCB newcomer Andrei Chagas were impressive as the male lead for the Tea segment. Ito was flawless scissoring his legs as he leapt forward in jeté cloche, and Chagas oozed energy, launching splits to close out the passage.

An equally energetic Alexander Peters launched himself through the dance of Candy Canes on Friday, snapping turn after turn jump-roping his hoop.

Grocki owned the role of lead Shepherdess on Friday and Saturday, flawlessly working through the role’s quirky pointe work set to staccato piccolo and flute.

Originally an image on a brand of chocolates in the 1880s, the Toledo rethink of Mother Ginger — performed by Bradley Dunlap on Friday and Harrison Monaco on Saturday and Sunday — had a satisfying air of the sci-fi monster about it. 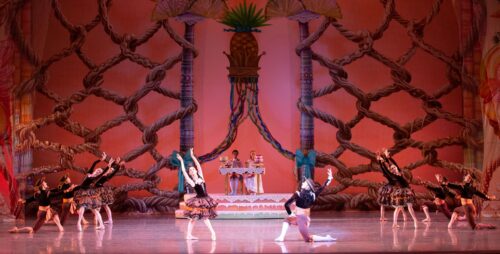 In the “Waltz of the Flowers,” principal Nathalia Arja in the role of Dewdrop wowed on Friday and Saturday, packing furious energy into the movements of her upper body and well-defined fouettés. However, a softer interpretation of the role by newly minted corps dancer Naturkas on Sunday was also memorable.

Principals Tricia Albertson and Steven Loch were spectacular in the roles of the Sugar Plum Fairy and her Cavalier. Loch attentively secured Albertson through spins and lifts, and his jetés in the coda were impressive.

Samantha Hope Galler and Ariel Rose played the pair in the Sunday casting and were also lovely. Hopefully, MCB has future performances in mind for this pairing.

Several North American dance companies succumbed to the economic challenges brought on by the pandemic, and some dance observers openly speculated whether audiences would even return to halls with vaccine availability, claiming dancers’ calls of racism and body-shaming might keep people away.

In this latest production, Miami City Ballet has presented a company whose talent base has clearly expanded during the shutdown, and whose Toledo-inspired “Nutcracker” continues to read as a commitment to classical dance becoming a genuinely multiracial and multicultural art form.

SAFETY PROTOCOLS: Be sure to review the COVID-19 health policies of your venue before attending a performance; visit arshtcenter.org/en/Visit/health-safety-covid-19 or kravis.org/healthsafety