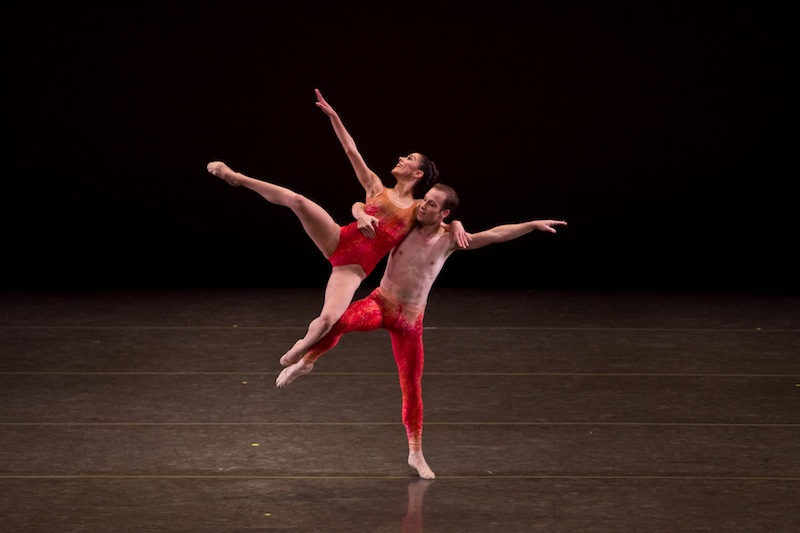 In its second program of the season, Miami City Ballet urged audiences to “Hear the Dance.” And, indeed, when the company opened at the Arsht Center last Friday, this band of dancers upheld harmony, staying in fine pitch as resonant as any musical passage from the orchestra or soundtrack.

Choreographic quality came guaranteed, with forays into Balanchine, Paul Taylor and Twyla Tharp repertory, each work distinctive yet equally admirable in its response to music. Just as rewarding, as has become the hallmark of casting under artistic director Lourdes Lopez, the evening showcased top company members while highlighting the considerable gifts of less prominent dancers.

Soon after the curtain went up on a diagonal of 16 ballerinas — in piercing white, their arms raised — and Stravinsky’s Symphony in Three Movements unleashed its clamor (Gary Sheldon conducted the orchestra), we knew we were in for a Balanchine at full throttle. The choreographer took the straightforward title of the score for his own composition, bonding the ballet’s structure and tenor to the edgy orchestral progressions; he kept dancers in plain leotards and held their complex inter-weavings in pure light. The lack of ornamentation served kinetic intricacy.

As the ensemble swept through in busy maneuvers, the atmosphere stirred with the run-around missions as well as in-place flourishes of three lead couples: Patricia Delgado (in true pink) and Renan Cerdeiro; Nathalia Arja (in framboise) and Kleber Rebello; Ashley Knox (in salmon) and Jovani Furlan. Arja and the men make up the company’s squad of Brazilian sharp-shooters — never less than thrilling. Knox revealed she can command the front and made us want to cheer this new phase of her career. Delgado brought the force that assured technique can deliver. Whether in holding a balance or calibrating her turns, she knows how to become an accurate instrument while mindful of the breath, the beating heart, that lends her performance humanity.

When in the ballet’s middle section she and Cerdeiro entwined for quirky images from Balanchine’s box of exoticism — Bugaku anyone? — the creatures they evoked, with strange angles and gestures, transformed the bare stage into an extraordinary habitat.

Paul Taylor’s Mercuric Tidings rolled out to effusive movements from Schubert symphonies. In flamingo-hued costumes, with the men bare-chested, dancers flocked in quick-shift formations, Tricia Albertson and Rebello at the helm. As performers, she is a spiritual being, and he is a full-blooded personality; paired, they adroitly represented Taylor’s dialectic of soul and flesh. Callie Manning was an enchantress leading cohorts around as if protecting coupled intimacies. Furlan and Chase Swatosh — with his crown prince blondness — best served the choreographer’s reliance on the strong male torso. But the whole ensemble sang, and the contribution of newcomers like Emilien Rivoire and Damian Zamorano and long-standing troupers like Bradley Dunlap and Zoe Zien showed their supporting steel can also shine like gold.

In the Sinatra Songs Tharp keeps us staring at modes of romance. Throughout nine segments, she offers both cool elegance and heat, sometimes flirting with awkwardness and even mis-steps, part of the trick in getting her athletic demands right. We can pick and choose favorites among these portrayals. For deepest adoration, there was Manning and Swatosh to “Strangers in the Night.” Jennifer Kronenberg and Carlos Guerra brought veteran know-how to “One for the Road.” To tickle, Jennifer Lauren and Michael Sean Breeden sparked “Somethin’ Stupid” into a cabaret version of a wind-up doll divertissement. Jeanette Delgado, in blazing red alongside Renato Penteado for “That’s Life,” fanned a great fire that the audience, in its ovation, seemingly wanted to rush to.