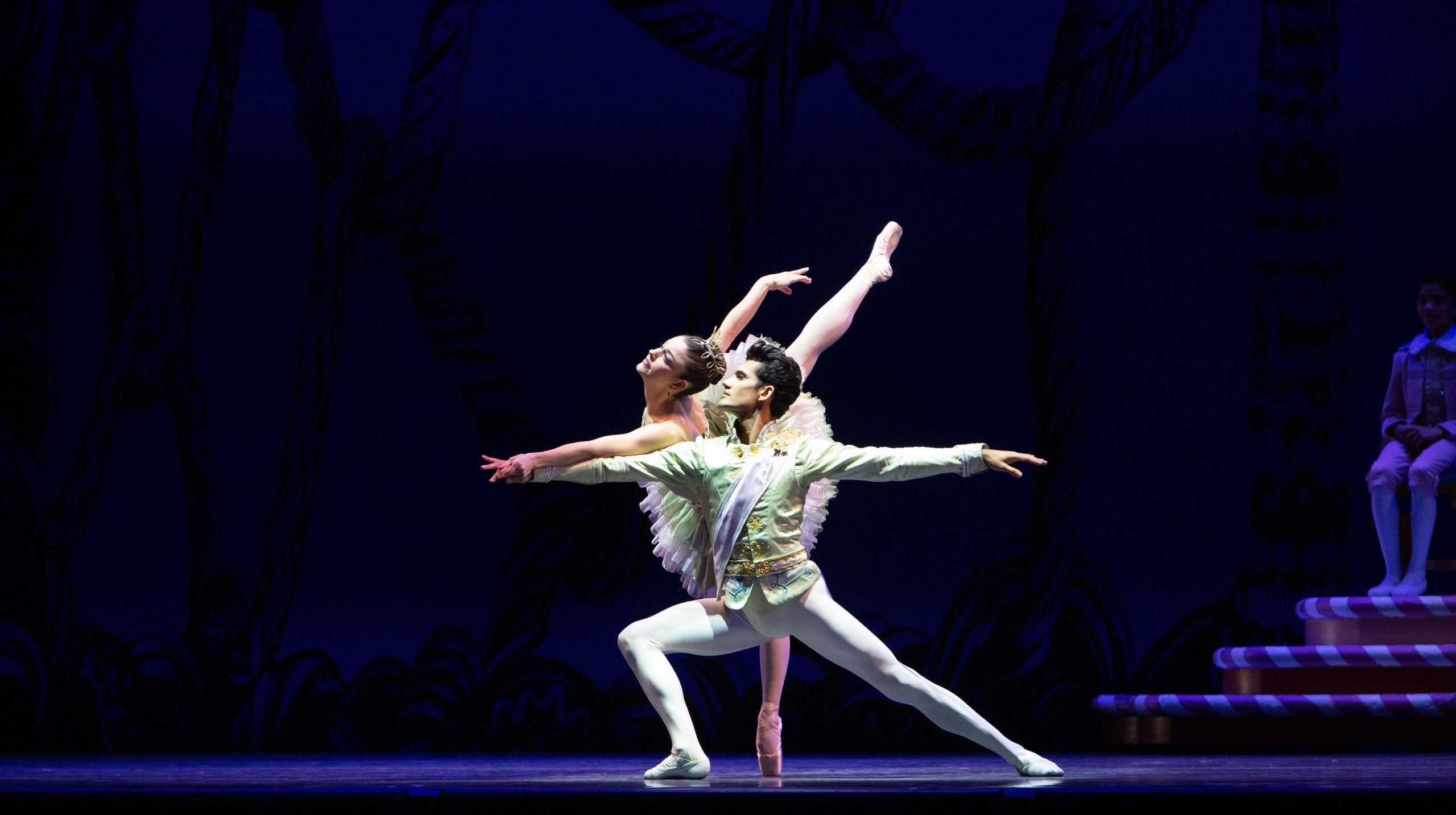 Every year, the “Nutcracker” ballet is a holiday tradition.

This year, ballet companies faced a difficult decision over whether to stage live performances. “Nutcracker” shows typically bring in a considerable percentage of yearly revenue for the nation’s ballet companies. Many companies that canceled their 2020-2021 seasons early continued to signal intentions of doing some sort of live “Nutcracker” well into the fall. However, in the end, they opted for online versions of the classic.

One notable exception: Miami City Ballet, whose 2020 rendition – entitled “George Balanchine’s Nutcracker in the Park” – is a live, full-length production with an outdoor audience and stringent safety protocols.

Presented through Dec. 31, this performance is a hybrid of filmed segments (mostly Act I) and live dancing (mostly Act II), based on the company’s 2017 “update” of choreographer George Balanchine’s 1954 version of the ballet. That update included new costuming by New York designer Isabel Toledo and scenic elements by her husband, Ruben Toledo, as well as South Florida-inspired lighting schemes by James Ingalls and gorgeous animated sequences from Wendall Harrington. 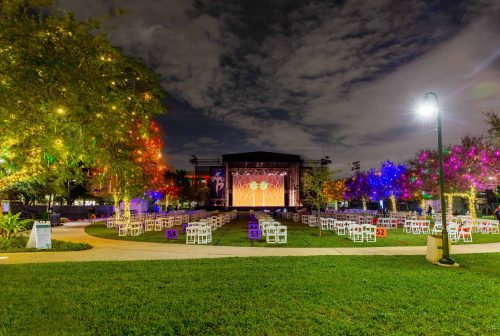 This new “pandemic version” of the holiday production at downtown Doral Park is the product of combined community forces, including the City of Doral, the Codina Family, and health-care sponsor Baptist Health South Florida. Together, they implemented strong measures at the park designed to maximize audience safety.

For starters, the ticket-processing was touchless, socially distanced and organized to keep people flowing into the open theater space. Ticketholders were quickly seated in “pods” – distanced areas with room for four. Audience members had seats or could bring blankets, depending on ticket level.

On Dec. 18, which was opening night, the familiar Wendall Harrington projection of the “Nutcracker” doll on the stage backdrop and rows of gorgeously lit trees shaped an outdoor theater that was noticeably informed by biomedical protocols yet still pretty and festive. The roughly two-hour performance included a 10-minute intermission, in which most people remained seated.

The audience capacity at the park was restricted to 600, which meant ample distance between pods. The Friday night performance was free for essential workers. Those in attendance complied with the frequent messaging to wear masks and remain socially distanced at all times. As dancers left the stage, they could be seen donning masks. 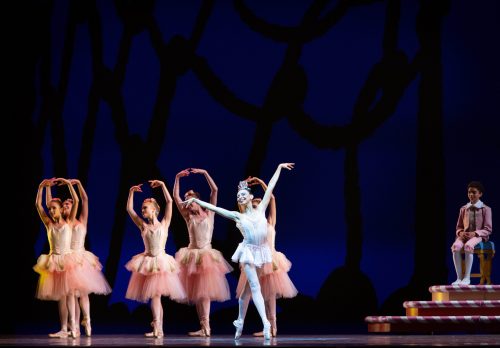 Nathalia Arja, in white, showed accuracy, speed and precision in her pointe work as Dewdrop in “George Balanchine’s Nutcracker in the Park.” (Photo courtesy of Alexander Iziliaev)

Aspects of “George Balanchine’s Nutcracker in the Park” were startling and offered a glimpse of what a marriage of digital production and live dance can do.

Act I’s film segments are a virtual-reality projection based on a post-2017 company performance of the ballet. The 3-D effect of the L.E.D. screen is so pronounced that it can be eerily difficult to determine when a shift occurs between live dancers and filmed segments. Adopting this approach for Act I’s party and fight scenes allowed the company to avoid safety issues involving dozens of child performers.

The film effects were not perfect. The white tones saturated certain segments of the film, making it difficult to see facial expressions and obscuring some dance sequences.

Still, the spell cast by the 3-D effects was so complete that when Marie – ably performed by a very real Mia Zaffaroni – entered to nestle into the red velvet folds of the sofa with her broken Nutcracker doll, the sight of a real body on the stage for the first time caused a couple of double takes.

The sensation was magnified with the first group number, “Waltz of the Snowflakes,” when 16 dancers executed snap kicks, coordinated pivots, and skimmed the stage in bourrées, in tight groups of four and eight. Watching a group perform live after so many months of virtual-only productions was electrifying.

Much of Act II continued the live dance, with a few notable changes. For instance, the act traditionally opens with “Dance of the Angels,” performed by the very youngest dancers. However, due to safety concerns, the current version replaces it with a Harrington animation of brightly colored sea animals, birds and dolphins whirling in a trippy vortex that resolved into a South Florida beach-scape version of the “Land of Sweets.” 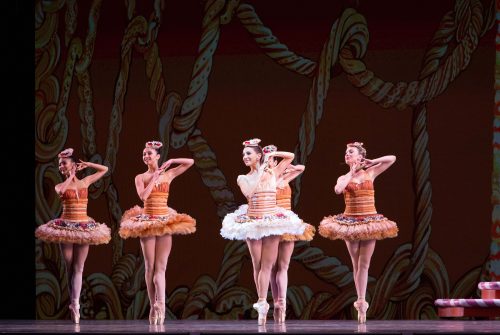 During the eight divertissements, some dancers struggled with the double tours, fouettés and ronds de jambe – entirely understandable given the cold (it was a breezy 60 degrees), the small dance floor, and the pandemic protocols.

Principal Jennifer Lauren was not one of them. In the role of the Sugar Plum Fairy, Lauren opened her solo against an emerald-blue backdrop, displaying terrific pointe work and piqué turns.

In the pas de deux that closes the act, Lauren returned with principal Renan Cerdeiro as her Cavalier. The two cast a spell, with Cerdeiro offering strong support during deep penchés, lifts and the choreography’s signature floated and pivoted arabesques.

Other highlights in Act II included the over-the-top exuberance that principals Lauren Fadeley as Hot Chocolate and Alexander Peters as Candy Cane brought to their respective roles. Emily Bromberg showed heroic attention to musicality throughout the contortions of the “Dance of Coffee.” Marzipan Shepherdesses Ashley Knox, Julia Cinquemani, Nina Fernandes, Suzette Logue and Helen Ruiz coordinated flawlessly throughout the intricate choreography’s slight, unforgiving shifts of weight, and principal Nathalia Arja as Dewdrop recalled her spectacular performance from last spring’s “Firebird” with the accuracy, speed and precision of her pointe work.

WHAT: “George Balanchine’s The Nutcracker in the Park”

COST: All tickets are sold as pods and cost from $120-$285, depending on the section and the date.  All tickets include free parking.

To read our preview for this event, click here.