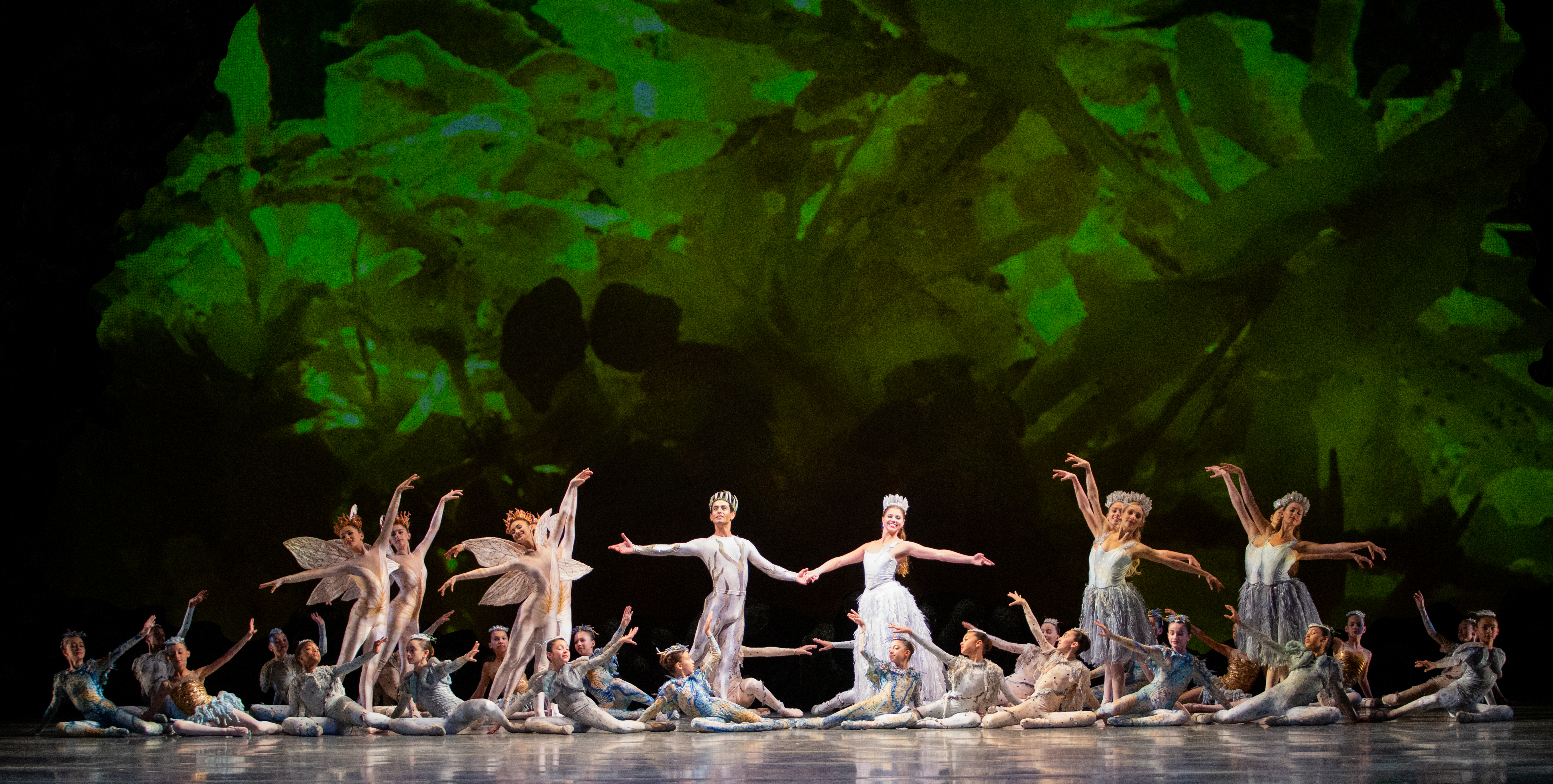 The final program of Miami City Ballet’s 2018-2019 season opened March 29-31 with George Balanchine’s 1962 adaptation of Shakespeare’s “A Midsummer Night’s Dream” at the Adrienne Arsht Center for the Performing Arts. The Friday and Sunday performances were well attended and marked the return of the company’s 2016 remake of the Balanchine classic, which translates the original forest-town setting into an under-the-sea, fantasia vibe.

From the overture, it was clear the night would be good for fans of Felix Mendelssohn. The winds, horns and strings were tight under American Ballet Theatre music director and guest conductor Ormsby Wilkins. The chorus was also remarkable. Sopranos Michelle Caravia and Sydnee Waggoner were lovely, alternating the first and second stanzas of Titania’s lullaby.

As a purely visual experience the production was a winner. Scenery and costume designer Michele Oka Doner slathered her sets with a gorgeous palette of greens, blues and golds reinforced by Wendall K. Harrington’s projections of floating plankton and seaweed. The front scrim during the first act completed the illusion of a watery medium.

Unfortunately, it also darkened the action. Thankfully, Doner chose bright whites and amethyst washes for the costume palette. She also shaped Oberon’s crown like a jellyfish bell, Titania’s train with a coral pattern and the hound’s masks with seahorse plates.

The Miami City Ballet student dancers were stellar. Whether in the role of butterflies, Oberon’s pages, fairies, courtiers to Theseus or the crowd-favorite seahorses, the students were a standout success.

The undersea theme, however, can be confusing. The remake doubles down on dream logic, in which people walk, dance and breathe underwater.

Balanchine, too, upended the play. Consider how Shakespeare presents the lovers, Lysander and Hermia and Demetrius and Helena. In the play, both couples are star-crossed. Hermia can marry the loathed Demetrius, accept exile with Lysander, become a nun or be executed. Helena is not codependent crazy, but she has been led on hard by Demetrius, and everyone knows it.

Balanchine ignores these nuances, and so the performances — even the steps — act as clues to character. There were many great performances on Friday and Sunday.

Jennifer Lauren and Chase Swatosh were lovely as Hermia and Lysander, their handhold foregrounded as a symbol of their concord. Lauren was also arresting in a later scene in which she raced the stage, haunted and hunted, suddenly halting en pointe, her arms floating up from her sides to scatter unseen insects from her neck. With no anchor in the play, the scene telegraphs Shakespeare’s observation that a fine line exists between love and madness.

As Demetrius and Helena, Renan Cerdeiro battled Emily Bromberg, who fought for his free hand or at least a hand on his hip to support a frantically struck arabesque penchée. Bromberg expressed the theatricality of desperation well. Cerdeiro channeled scorn even more convincingly on Sunday as a lover who doesn’t just prefer Hermia, but hates Helena.

Shimon Ito was a terrific bronzed Puck, lending a touch of the otherworldly to impressive leaps by the silence of his landings.

Both Kleber Rebello on Friday and Renato Penteado on Sunday squeezed every moment from Oberon’s scherzo with snaps of sissonne and cabriole between leaps, feet beating in entrechat six before landing and launching à la seconde pirouettes. Both principals pulled off the sequences while oozing nonchalance.

Lauren Fadeley as Titania was a physically commanding presence when she denied Oberon her priestess’ son (sweetly performed by Dev Jones) or directed a manatee-headed Bottom (comically mimed by Didier Bramaz) in love-drunk abandon to support her in arabesques and lifts.

Also notable was Jordan Elizabeth Long as the Amazonian Hippolyta, who presented power with a chain of 14 fouettées interspersed with double pirouettes.

Balanchine’s “Midsummer Night’s Dream” is not about Shakespeare’s play. It is about how dance outdoes speech. In the heat of passion, people say anything to get what they want. The real question is, what do they do? Dance has an advantage here, because the body can’t hide like the mind can.

This is why Balanchine makes the second act about an unnamed couple who perform as placeholders for the intimacy of partnership. On Friday and Sunday, Katia Carranza and Rainer Krenstetter were arresting in the pas de deux. Krenstetter offered Carranza a hand from behind that she took without looking, and he gently windmilled her arms up and over as she bourréed forward on the diagonal.

The Sunday show closed with the announcement that after 19 years at Miami City Ballet, Penteado’s performance as Oberon would be his final one at the Arsht Center. It was a shock. Simone Messmer and Jovani Furlan are also out, along with Reyneris Reyes and Didier Bramaz. Furlan is off to scandal-plagued New York City Ballet, and Reyes will remain as an instructor at the Miami City Ballet school.