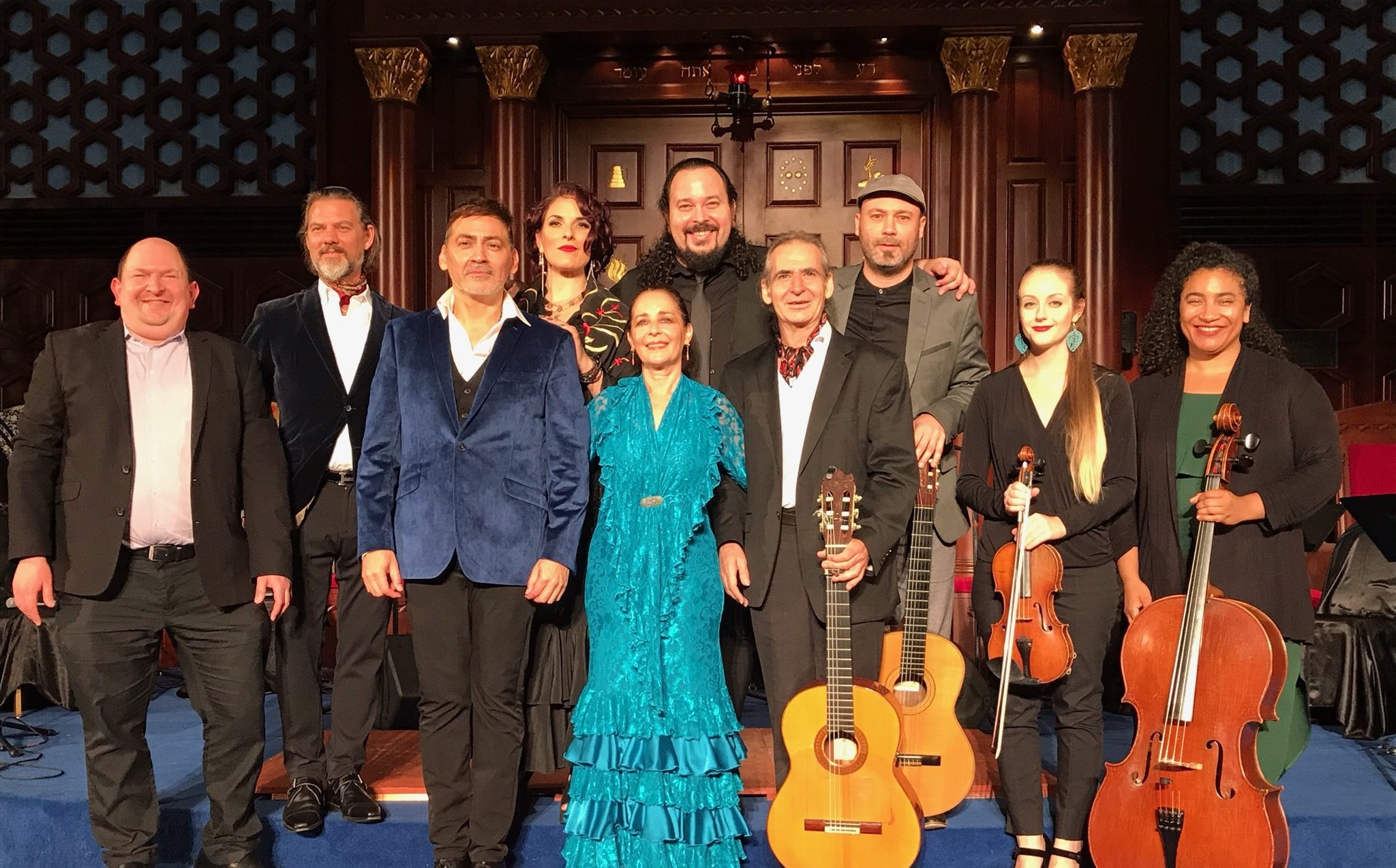 Miami increasingly figures as an international center for flamenco, second to Madrid, of course. Yet amid this sea of offerings, Flamenco Sephardit’s latest program in Miami Beach shone bright.

The Jan. 26 performance, “Flamenco Sephardit VII,” presented a fusion of Andalusian and Jewish traditions – blending Spanish flamenco with Ladino music and dance. It took place in a packed Temple Emanu-El and featured the well-known, husband-and-wife team of Celia and Paco Fonta. (The couple belongs to the Miami-based flamenco group, Siempre Flamenco, which is known for the  annual Festival de Cante Flamenco shows in September that have delighted audiences for more than a decade.)

After a quick introduction, Rabbi Marc Philippe – one of the evening’s singers – spoke about Ladino and flamenco’s connection to North African Muslim art forms and told the audience to think of the performance as an act of light and love.

Though flamenco dance and music are well-known, Ladino music is not as recognizable. Once spoken by Sephardic Jews from the Iberian Peninsula to the Ottoman Empire, Ladino is a dialect of 15th-century Spanish mixed with French, Italian, Portuguese, Greek, Turkish, Arabic and Hebrew.

Nowhere was this more evident than in the evening’s second piece, “Fel Sharah Canet Betet Masha” (“Walking down the street”), whose lyrics read as a mash-up of languages.

New World Symphony fellows Katherine Kobylarz on violin and Chava Appiah on cello laid down a slow, off-beat melody that spun into a gorgeous ballad with Philippe on vocals. This set up the entrance of dancer Jorge Robledo, who sprang to the center of the stage, striking in a blue velvet jacket and black vest.

With the bimah right at eye level, the synagogue proved a spectacular place to view the dancer’s quick footwork. Robledo caused the edges of the makeshift dance surface to pop off the floor with the strength of his rapid heel strikes. He snapped out an opening sequence before Celia Fonta – striking in a full-length turquoise dress ringed with ruffles from the waist down – joined him.

The two circled, mirroring each other’s sudden shifts of posture, pulses in shoulders, and quick snaps of the head. The audience burst into appreciative applause.

Celia Fonta returned with “Como la Rosa” (“Like the Rose”), and she was marvelous.

Mezzo-soprano Audrey Babcock, whose gorgeous operatic vocals were a highlight of the evening, spun a slow and mournful melody, accompanied by Appiah’s cello and Paco Fonta and Michel Gonzalez on guitar.

Celia Fonta theatrically arched her back and worked her arms sinuously while tapping out tight percussive sequences, her feet pacing the rhythms of her husband’s guitar. She floated forward on a wave of eye-popping footwork, pulling out all the stops as she high-stepped across the stage. Her solo ended and the audience went wild.

Another highlight was a “seguiriya,” which is a type of flamenco music in the “cante jondo” vocal style (“deep music”). It opened dramatically with Robledo slow-walking to the center, his eyes locked on Babcock. Without relaxing his gaze, he crouched and pivoted in place, finding the singer’s eyes repeatedly as he raised arms overhead. When Babcock’s solo ended, Robledo’s fireworks began.

As Paco Fonta spun an insanely rapid guitar solo, both dancer and guitarist riffed off the other’s rhythms, the dancer’s arms circling, fingers snapping, left hand holding open his jacket. Then with a snap of his head, he froze.

With the sanctuary silent, the audience first applauded but stopped as the violin and cello drove the melody forward. Robledo responded with intricate, infectious footwork that sent the hall vibrating. Many in the sanctuary swayed, and some at the front raised their hands. When the number ended, audience members got to their feet.

But the evening contained one more surprise, “A La Una,” which closed the performance spectacularly. Percussionist Jose Moreno started with a drum solo then suddenly sprang to the center of the stage and belted out a song before unmasking his skills as a dancer with a sequence of whip-like turns and lightning rhythms. Moreno’s theatrics ended the evening with the audience again on its feet.