Review: Dimensions Dance had audience on its feet with ‘Ballet Sculpture & Serenity’ 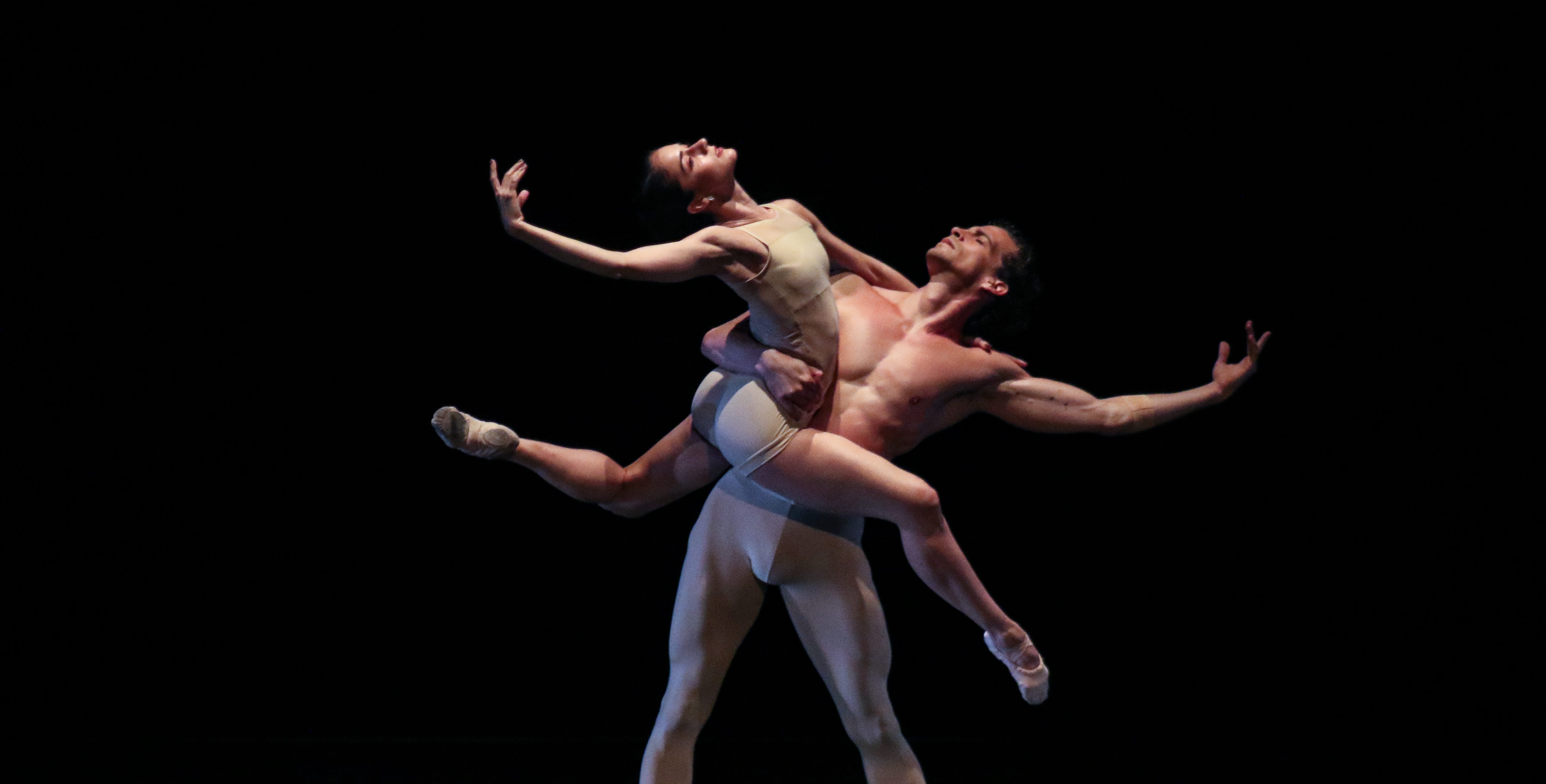 Dimensions Dance Theatre of Miami opened its season Nov. 16 with “Ballet Sculpture & Serenity” to a mostly full house at the South Miami-Dade Cultural Arts Center. Two company premieres and a world premiere headlined a program of works focused on the theme of metamorphosis in a company itself transformed by key departures and new additions.

First up was Tara Lee’s “Under the Olive Tree” for only its second full-length performance since the company’s debut in November 2016. The ballet is visually lavish even if its libretto – the Greek gods descend from heaven to experience human passions – was impossible to decipher from the performances.

Still, approached as a purely abstract work, “Olive Tree” works. It opened to Vivaldi’s “Four Seasons” with women in green and black leotards shaping the trunk, branches and leaves of a huge tree, framed by a column of yellow light.

One by one, they sprang apart, leaving Ryan Nicolas (new this year) alone to solo to the violin, spinning in pirouettes that ended in powerful lunges forward or to the side.  Group sequences followed with Trisha Carter, Meisy Laffitte, Yaima Mendez, Miranda Montes de Oca, Selah Oliver and Calista Olson.

In smaller groupings Carter, Mendez and Oliver were electric, but timing was a challenge in the large group sequences.

The strongest performances of “Olive Tree” were its two pas de deux, danced by Nicolas and Chloe Freytag and Natanael Leal and Mayrel Martinez. Nicolas partnered Freytag well, snap re-directions of her turns unfolding into surprising, mind-teasing lifts. Their dance contrasted wonderfully with the playful feints and sinewy game of catch performed between Leal and Martinez.

The audience showed its appreciation for “Olive Tree” with many on their feet.

Next up were the evening’s two strongest pieces: “Shogun”, a company premiere by Brazilian-Japanese choreographer Ivonice Satie, followed by “Apollo & Daphne,” a world premiere by Emmy Award-winning choreographer, Ben Needham-Wood of Smuin Ballet.

“Shogun” showcased two of DDTM’s most accomplished male dancers, Kevin Hernandez and Yanis Eric Pikieris, in full-length, pleated, red hakamas knotted at the waist. Drenched in a Persian blue light, sequences invoked the relation of master and disciple, with Hernandez striking a lunge imitated by Pikieris as both scissored into full splits then popped back to standing. 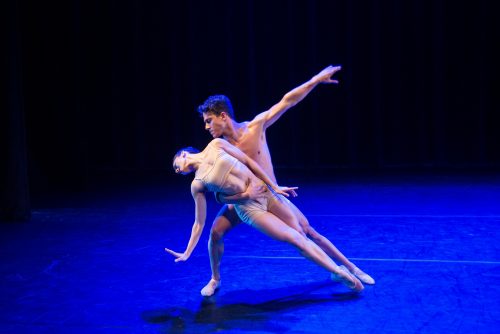 Other segments externalized the inner conflict of acquiring a spiritual discipline as Pikieris at the center spun furiously, leg swinging off center in contrast to Hernandez, who paced slowly behind him, rooted and meditative.  Throughout the piece, both dancers performed with spectacular precision and energy.

The piece began with Morales dwarfing the petite Lezcano in an opening that recalled DDTM’s “Space Between Words.” Morales moved magisterially, more like a force of nature than a love-sick god, suspending Lezcano through a succession of lifts or sweeping her off her feet as if scooping up a kitten. Lezcano was lovely throughout and showed terrific theatricality, unable to prevail externally so withdrawing into reverie, whether standing alone or being mastered physically by Morales.

And this is where Needham-Wood’s take on the myth offered something new, presenting a Daphne who had escaped within, where not even a god could reach her. There was so, so much to like in this piece.

The evening closed with the world premiere of Yanis Eric Pikieris’ “Genus.” Loosely organized around an evolutionary vibe, “Genus” opened with two opposing groups of dancers, one in black and the other in nude-colored shorts and tops, the stage lit from both sides with bright cones of light.

Notable here was a pas de deux performed between Morales and Freytag – with Freytag supported at the waist and spun by Morales into a deep penché or floated across the stage in a split lift.  When Mendez (notably gorgeous here) joined them, the two women played for his eye as Freytag impatiently bourréed at his side, while Morales supported Mendez through a head-high kick that plunged into a deep forward bend.

Pikieris’ sequences for the women teased and surprised. Classical pirouettes suddenly snapped into an elastic hip roll, one arm lifted to accent the S-curve of the waist. The men generally supported and shadowed the women, rarely breaking out on their own.

Oliver was breath-taking in her pairings with Stephan Fons. Her attention to the upper body, wrists and fingers made the accents in the violin pop. She showed considerable strength, holding her frame steady but supple through lifts.

The ballet progressed by reconciling contrasts into increasingly complex groupings that toward the end grew repetitious. Still, the ballet closed deliciously, the back wall lit in washes of pomegranate and sapphire blue for a final tribal dance that included the entire cast.

With the drop of the curtain, the audience was back on its feet.