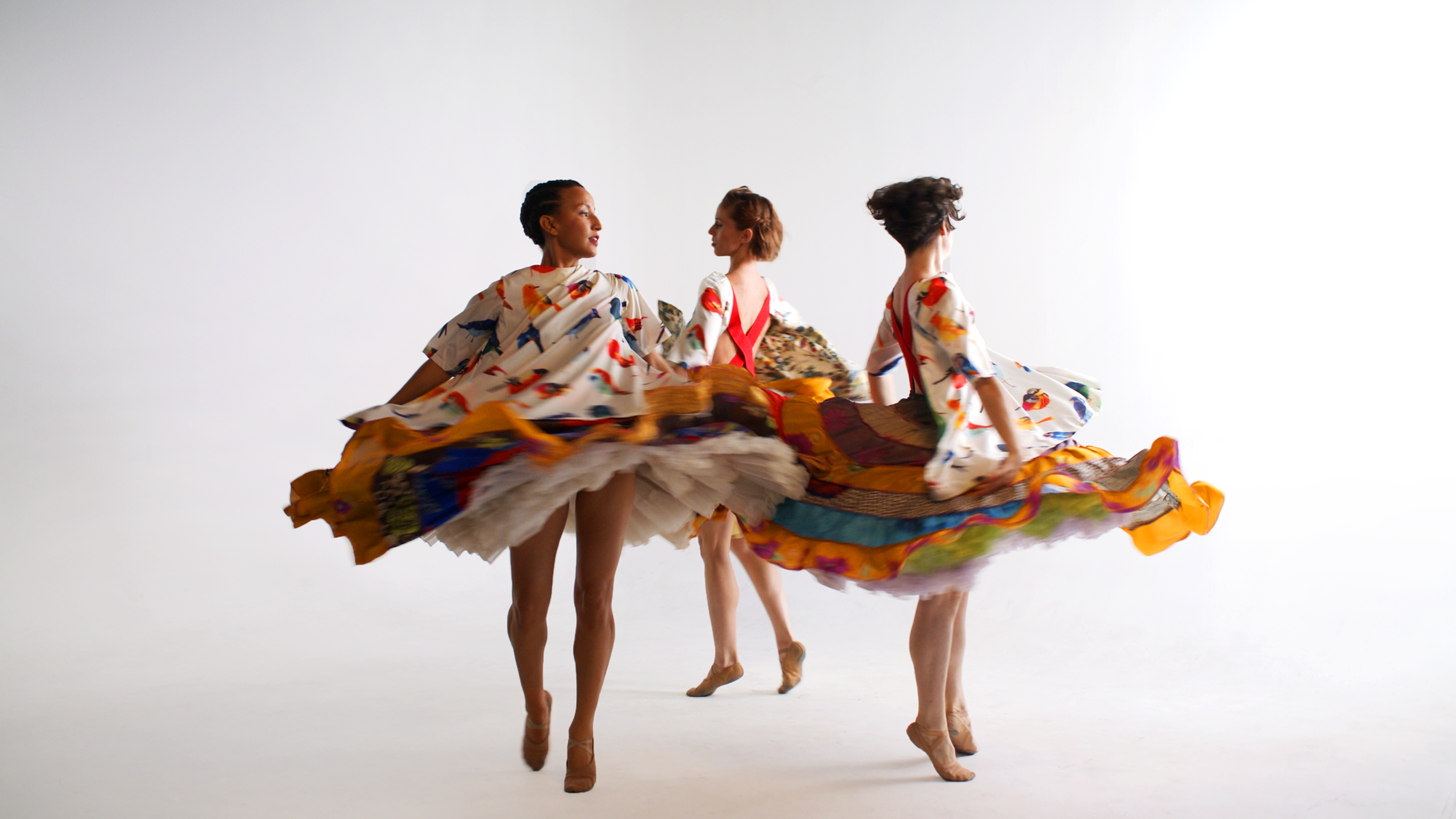 Miami choreographer Brigid Baker’s company, Wholeproject, performed “Big Wonder,” Jan. 17-18 at the Miami-Dade County Auditorium’s On.Stage Black Box Theatre. The Friday, Jan. 18, performance was sold out, and the theater was packed for an avant-garde program whose works explored the natural preconditions of the work of art. The first piece, “Wonderlawn,” was dedicated to the effects of the 1980s AIDS epidemic on New York’s artistic community. The second work, “Big Beautiful,” argued for a shift in ethos toward the natural world.

“Wonderlawn” opened as dancers Meredith Barton, Myriam Frederick, Liony Garcia, Isaiah Gonzalez, Nadina Liberatore and Juliana Trivino walked onto the stage and stared intently at a 6-foot mass of tightly bound branches and leaves, sheathed in paper, bound with rope at the top and painted gold like a massive bouquet hung upside down. Elevated far above to the left of the stage hung a gown, also in gold. During the opening, the dancers swayed gently in place or were motionless.

On a small screen offstage, a film segment featured a crow in flight. As a voice slowly spoke the refrain, “Love, sure, is a good example” (composer Robert Ashley), the dancers made quick shifts between soft, circular movements to hard pivots framing boxes with arms and wrists. Two of the dancers moved with the slow, deliberate speed of the speaker’s voice, the others laid out a rapid flow that intentionally contrasted with the music, arms circling, legs popping to attitude then sweeping through to float a quick pirouette. The effect was powerfully melancholic.

The middle section of “Wonderlawn” opened to Darius Milhaud’s “Suite Pour Ondes Musicales Martenot et Piano” (1933), an adagio piece set to piano, flute and strings. As opposed to the group synchrony of the first movement, here the dancers moved independently of one another, pivoting, circling or lunging. On the wall behind them, lines in light slowly described geometric figures in a sequence programmed by video projection artist Justin Trieger.

Resonances often appeared between projection and choreographies. For instance, during a solo, Barton danced the melody line with circular movements, pivots ending in arabeseque, or pinwheeling the arms to generate a spin. The sequence was lovely, and matched both the music and the geometries crafted on the screen.

“Big Beautiful” followed. Here, dance, film and lush costuming (from repurposed materials) combined in a gentle but pointed critique of the human stance toward nature as theatrical presentation and object of consumption.

Suspended on hangers above the stage were three rows of fuzzy pink, purple and gray sweaters. Attached beneath were large dream catchers — some circular, some square — woven with brightly colored yarn.

Hands held in prayer, the dancers moved in slow motion to an adagio chord progression in a piece by Steve Hillier. At times, a dancer would separate for a demi-solo, but the sequences of both soloists and the main group attended carefully to the phrasing of the music, whether they pivoted sharply, spun dervishlike or fanned their legs over and back to strike a deep fourth. The overall effect with the ripple and bob of the costumes was marvelous.

The first movement closed to enthusiastic applause and from here things got meta.  As the audience, applauded a recording began of an audience applauding. With the opening measures of Tchaikovsky’s “Piano Concerto No. 1 in B-Flat minor” (op. 23), sequences of animals in action began to project on the wall: a bunny avidly chewing a dandelion, a carnivorous caterpillar snapping up a fruit fly, a honey bee hovering in flight. Interspersed with these sequences were black-and-white film clips from the 1920s of audiences clapping.

Ingenious editing techniques discovered wonderful parallels between film image and musical phrase, as when a kingfisher needled the water to an oboe solo, and the projected images often generated visceral sensations, as when a clip of gazelles popping into the air looped repeatedly.

The visual and sonic games played here gently critiqued the convention of spectator passivity in theatrical (and cinematic) presentation as a form of detachment from the body’s naturalness. It also established through the rhythm of its visuals the natural sympathies of the human body with the bodies of a natural world in constant (dancelike) movement.

With this, the third movement began to the sound of birds, and the four dancers returned for an extended conclusion, akin to the opening section but more upbeat with gorgeous sequences set to the strike of chimes and glocks. There was so much to like in “Big Beautiful,” and the audience responded enthusiastically and on its feet.