Review: ‘Birds of Paradise’ is ambitious, spectacular … and unsettlingly personal 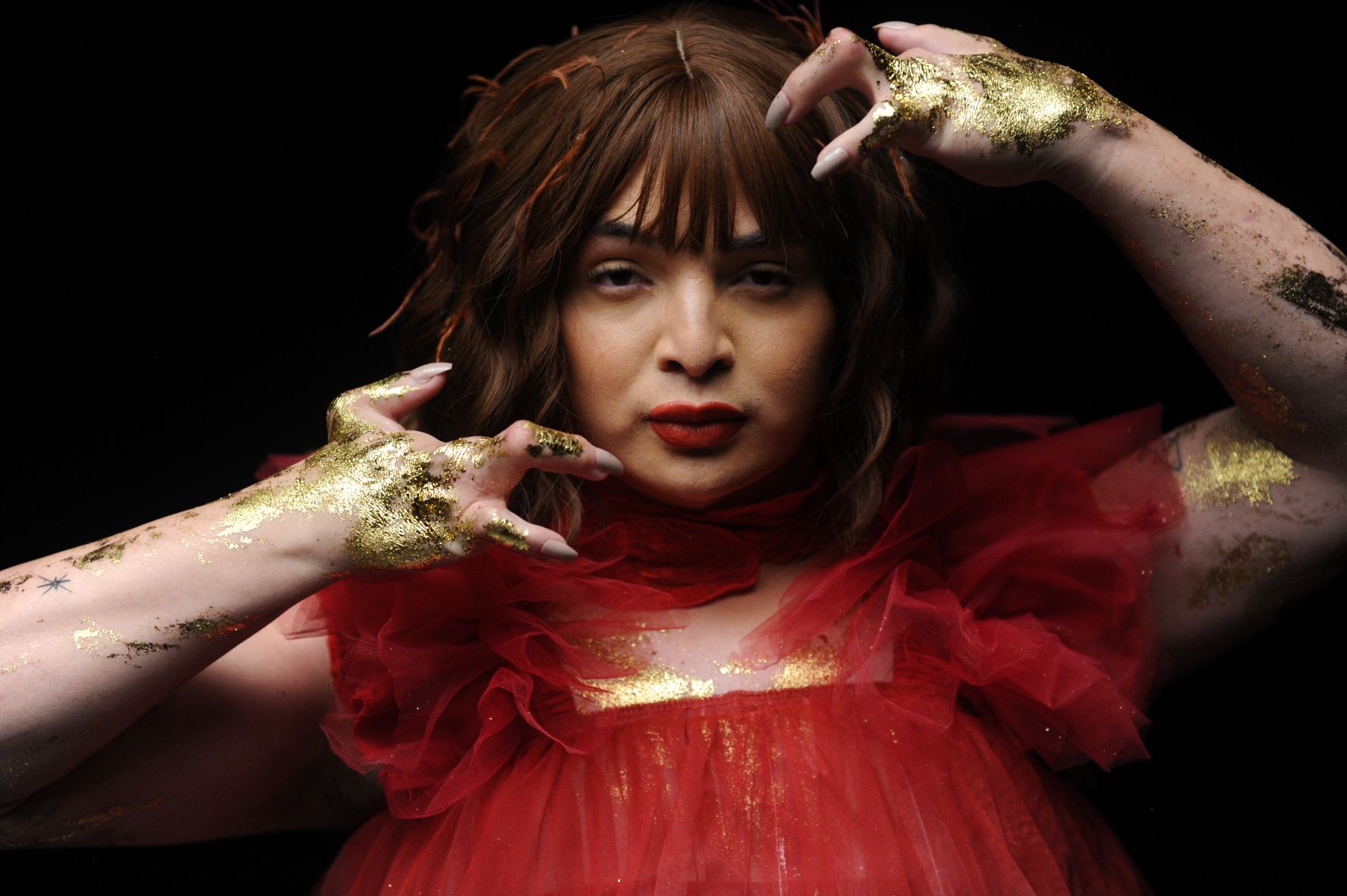 Gabriela Cruz in “Birds of Paradise.” (Photo courtesy of WorldRedEye.com)

After a twisting two-year journey sent into unexpected directions, like everything else, by the pandemic, choreographer Pioneer Winter’s dance/multimedia work, “Birds of Paradise,” premiered at the Adrienne Arsht Center for the Performing Arts on Thursday, Sept. 16, 2021 — and it turns out to be powerful but mysterious, even indeterminate. Very much like what the pandemic has been to all of us.

By digging deep to explore the vulnerable psyches of his eight performer/collaborators across giant screens and in front of us, Winter has made something revealing about an uncertain time, and the power inside us, whether separate or apart. Commissioned by the Arsht Center when it made Winter its first resident-artist in more than a decade, “Birds of Paradise” plays at the Arsht through this Sunday only. 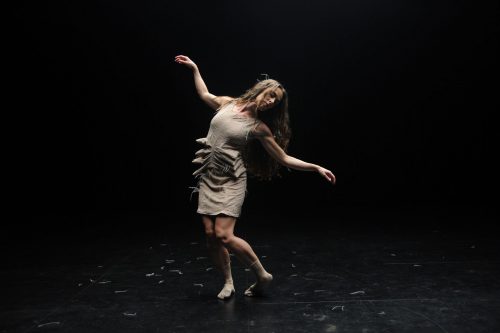 “Birds of Paradise” is certainly the most ambitious piece that Winter, who has become one of Miami’s most influential artists, has ever made. His influence is not only as a dancemaker who champions individuality and queer identity outside all kinds of conventional margins (he works with performers who are disabled, transgender, physically large, or not traditionally trained, among other things), but as a producer of site-specific work and the director of Miami Light Project’s ScreenDance Miami festival.

Winter has explained the piece many times (for insight, check out the study guide on the Pioneer Winter Collective website), and he did so again for the audience that filled the socially distanced seats in the Arsht’s Carnival Studio Theater on Thursday evening: “In the queer community, isolation is felt often,” he said. “This is the first time everyone felt that isolation. But it’s also beautiful to see what can be made in that void. Tonight, we celebrate eight solo artists, then see them come together. We celebrate the power of transformation. Especially the transformation that nobody sees.”

That sounds pretty comprehensive. But it doesn’t get to the visual gorgeousness, intensity, and the interwoven film, sound, costume, design and performance elements of “Birds of Paradise” — it’s a true creative collaboration. The piece opens with performer Barbara Meulener’s hands blooming against a blue sky on a wall-spanning screen, as part of a film, the first of eight. The films are by Ronald Baez’s White Elephant Group. Baez is credited as co-director, with Kevin Berriz as cinematographer, colorist and editor. The stunningly shot, emotionally detailed and unnervingly intimate films are the most vivid aspect of “Birds of Paradise.” 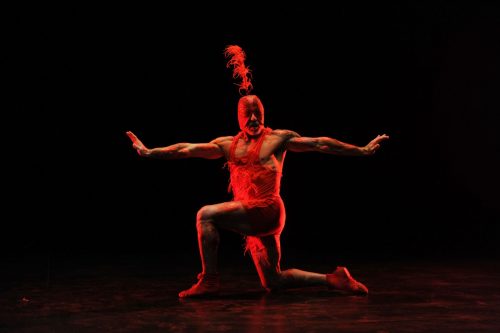 Frank Campisano in “Birds of Paradise.” (Photo courtesy of WorldRedEye.com)

Also integral is Juraj Kojš’ sound design, which brings us the dancers’ voices, their breathing, their inchoate noises, almost as if we were inside their heads. Chaplin Tyler’s fantastical, intricate costumes, in brilliant red or pale flesh tones, incorporate billowing clouds of fabric, body-hugging lace rosettes or filmy sheaths, wisps of feather. Mai Lan Lau also gets credit for styling. Hair and makeup designer Angel Torres splashes their faces and bodies with iridescent gold and red. The effect is to turn the dancers into hallucinatory, very faintly birdlike creatures.

The piece starts with films in the studio theater, each on their own screen, then moves down a hallway into another large space, with the films continuing on multiple screens. (Also impressive are David Hans Lau’s production design and Quanikqua Bryant’s lighting.) Although projected text invites us to move around, the audience stayed seated in each room.

Each film is an expressionistic portrait that includes the dancers speaking about their state of mind during isolation. Meulener arches and spins in a velvety black void, images of blue sky and her lying on a lush green lawn flash, as if she’s imagining the outdoors – a shot of grass springing back evokes her absence. Frank Campisano, a sinewy, elderly, classically trained dancer struts with sensual disco-ish moves across three split screens. Niurca Marquez, face haggard with black eye shadow, crouches atop a wood box like an abandoned goddess who’s partied too hard, hands clawing and arms winding in a jagged twist on flamenco. 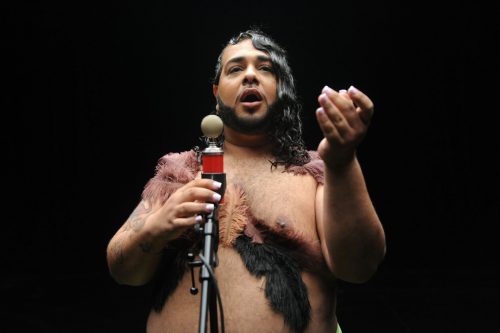 Josue Garcia in “Birds of Paradise.” (Photo courtesy of WorldRedEye.com)

“Exploration of the thing deep inside,” she says. “It also shows you are alive.”

We see Josue Garcia, imperiously large, swelling pectoral breasts outlined by feathers, belly curving over a bikini, and hear him curse his mother for abandoning him. “Why did you leave me?! Why didn’t you love me?” In the past, or just now?

Garcia leads us to the next space and to powerful, statuesque Katrina Petrarca, panting, writhing, reaching toward a camera that zooms into her face.

“I’m reaching that crescendo,” she says, “that point of letting it all out.”

Enigmatic Gabriela Cruz seems to float in a cloud of a dress, her hooked and elongated hands flinging wide, while Lize-Lotte Pitlo lunges, arches and spins.

“It’s like I’m putting my skin under a microscope,” Pitlo says. “I almost feel you can read my thoughts.” 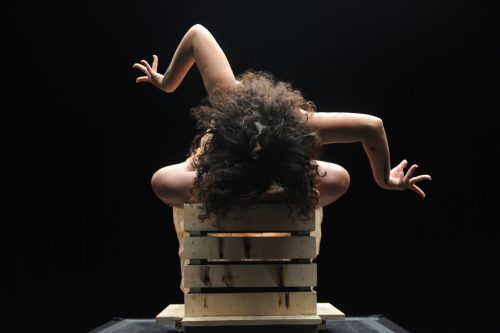 Niurca Marquez in “Birds of Paradise.” (Photo courtesy of WorldRedEye.com)

Last and most powerful is Shamar Watt, not only because he’s a such an intense, formidable presence, but because he is the only performer who interacts live with his film, projected on three screens. A wide, bell-shaped tunic swinging around his muscular frame, Watt stamps atop an amplified platform, the sound thundering ominously. He howls, head thrown back, an agonized king bird, while the film shows him silhouetted in a vast orange-red background, as if in a lonely nightmare from inside his head. It’s immensely affecting and unsettling, and it makes you wish “Birds of Paradise” had more of this kind of exchange between film and live performer.

The finale sees the other seven performers together onstage, no film. They sway, circle, reach, arch, clump together and spin apart, crouch on the three amplified platforms to scratch up sounds (another of Kojš’ inspirations). The section seems like a structured improvisation, and while the dancers’ fierce commitment carries the dance, the moment also feels meandering. And yet, it also fits. As if they’ve ventured out of their isolated pandemic film cells into the world: uncertain, chaotic, and anxious – but filled with the energy of coming together.

COST: $40 admission, plus $15 tickets available as part of the Arsht’s “Sweet 15” celebration (arshtcenter.org/Tickets/Sweet-15)

SAFETY INFORMATION: Based on guidance from national and local health officials, the performance will be seated at limited capacity and require face coverings.